Next Lesson - All done here! Check out our other units!

DNA damage response is a hugely complex area of genetics. Thankfully, there isn’t too much detail that is required for medical training.

In general, replication stress (where the replication fork slips, stalls or breaks) and mutagens cause DNA damage. This activates a signalling cascade which either results in the cell undergoing senescence/apoptosis or DNA being repaired at the next cell cycle checkpoint. 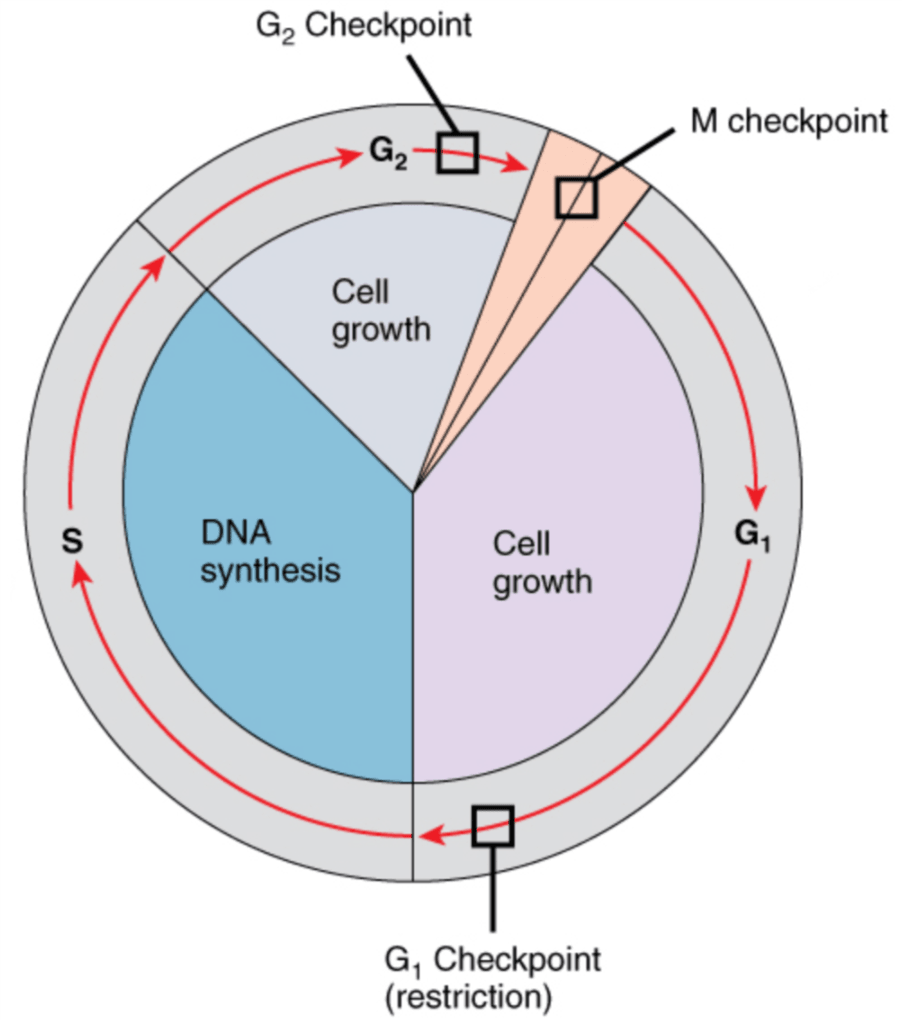 Diagram: The stages and checkpoints of the Cell Cycle

The above image shows the cell cycle with each stage of interphase marked along with mitosis (in pink). This image also highlights where certain cell cycle checkpoints are located. Checkpoints are periods of temporary cell cycle arrest which provide time for DNA damage to be repaired.

The mitosis (M) checkpoint checks to make sure that all chromosomes are properly attached to the mitotic spindle. If this happens correctly, then duplicated chromosomes can then be pulled apart.

The G2 checkpoint checks to make sure that all DNA is replicated and checks to see if all DNA damage has been repaired. If this is true, the cell can then undergo mitosis.

In healthy cells, these checkpoints work to ensure the cell remains healthy and can go through mitosis.

If DNA damage levels are too high and p53 can't fix the damage the cell will fail the G2 checkpoint. P53 will then signal the cell to either undergo apoptosis (cell death) or senescence (permanent cell cycle arrest in which the cell does not divide but may still function).

Ideally, all DNA damage will be repaired, and cell function will be maintained. However, this is not always possible.

There are multiple DNA repair pathways, the type of pathway used depends on the type of DNA damage and the cell cycle phase.

One way in which DNA can be damaged is through a double-strand break. As the name suggests, both strands of DNA have broken, making this the most genotoxic DNA lesion. Although the fine details of repair pathways don't need to memorised and only a general understanding is required, we have included this information for reference.

There are two ways in which a double-strand break can be repaired:

The image below shows both mechanisms in detail much greater than what is needed for pre-clinical exams but are good to help you visualise the repair mechanisms.

The two hit hypothesis explains how cells accumulate mutations overtime. If a mutation damages a tumour suppressor gene such as p53 the cell should be fine as the second copy of the gene will be unaffected. However, if a second ‘hit’ is given and there is no tumour suppression, the cell can go from being healthy to pre-malignant and then finally malignant. This process is called carcinogenesis.

Abnormal DNA damage responses can be inherited, which will predispose an individual to cancer in later life e.g. Hereditary Nonpolyposis Colorectal Cancer (HNPCC). HNPCC is caused by a defect in DNA mismatch repair and as a result leads to a higher likelihood of cancer.

Once a cancer develops, cells can continue to mutate. This leads to intra-tumour heterogeneity which makes tumours harder to treat as it can lead to therapy resistance or metastasis.

An alternative result to clonal expansion is chemotherapy-induced mutagenesis. This occurs when cells are not killed outright by the chemotherapy, but their DNA is damaged just enough to mutate. This is a problem as it further increases the heterogeneity of the tumour.

At the moment, the most well-established approach to treating cancer is to cause more DNA damage, as the cancer cells already have defects in their DNA repair mechanisms so will by pushed into apoptosis with extreme damage. However, normal physiologically rapidly dividing cells are also often affected, which cause various side effects:

At the moment, targeted chemotherapy options are being explored, which seek to inhibit only a few repair pathways which are active in tumour cells. As normal cells have all DNA repair pathways functioning, these cells will survive. However, this approach is often limited to a specific context or cancer type. This technique of only targeting tumour cell pathways is known as synthetic lethality.

For more information about cancers, head to the Neoplasia articles in our Pathology series.