Alll done here! Check out our other subjects!

This article is closely associated with the article on the Lumbar Plexus, as both the lumbar and sacral plexuses supply peripheral nerve innervation to the lower limb.

Each of these peripheral nerves will be discussed individually throughout the article.

It is also useful to know that all of the peripheral nerves that originate in the sacral plexus leave the pelvis via the greater sciatic foramen. 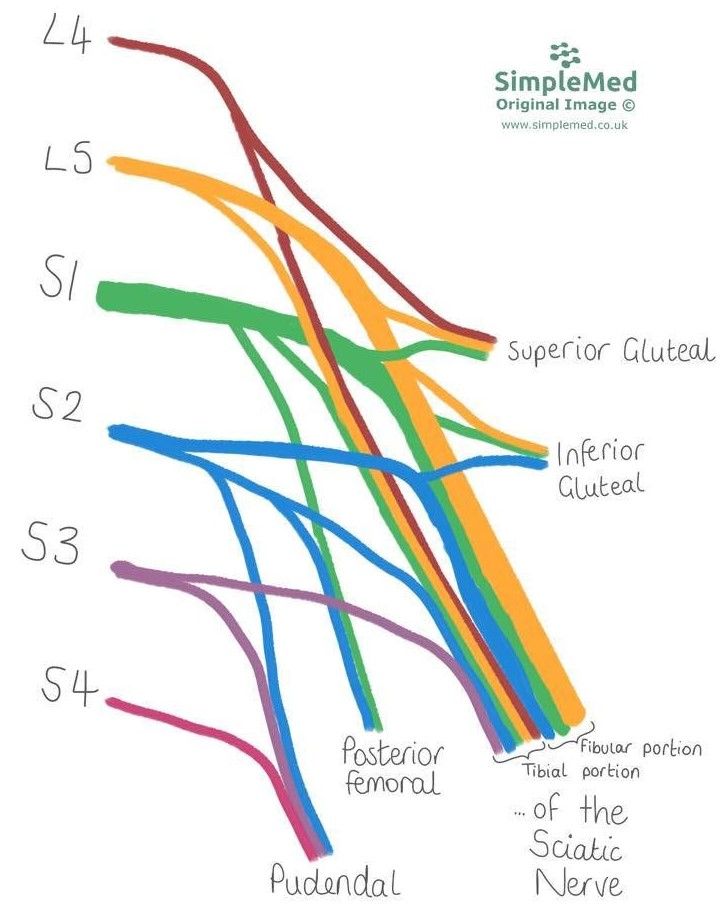 Diagram - The sacral plexus, with the six spinal nerves on the left and the five peripheral nerves on the right (and the bottom). It is important to note that although in this diagram the sciatic nerve is shown to have two different portions with different roots, they make up the same nerve

Peripheral Nerves of the Sacral Plexus

The superior gluteal nerve is the first branch of the sacral plexus.

It leaves the pelvis through the greater sciatic foramen, superior to the piriformis muscle.

It has three spinal nerve contributions: L4, L5 and S1.

The motor functions of the superior gluteal nerve include the gluteus minimus, gluteus medius and the tensor fascia lata.

It has no sensory functions.

The inferior gluteal nerve is the second branch of the sacral plexus.

It leaves the pelvis through the greater sciatic foramen, inferior to the piriformis muscle.

It has three spinal nerve contributions: L5, S1 and S2.

The motor function of the inferior gluteal nerve is the innervation of gluteus maximus.

It has no sensory functions.

The sciatic nerve is the largest nerve in the body, approximately 2cm wide, and is the third peripheral nerve to exit the sacral plexus. It can be considered to be two separate nerves within the same fibrous sheath: the tibial nerve and the common peroneal nerve (also known as the common fibular nerve). In most people, the sciatic nerve separates into the two constituents just superiorly to the popliteal fossa, but they may separate at any point superior to this.

It leaves the pelvis through the greater sciatic foramen, emerging inferiorly to the piriformis muscle (in most people). It passes over the muscles of the deep gluteal region and enters the posterior thigh by passing deep to the long head of biceps femoris. Within the posterior thigh, it gives off the branches to the hamstring muscles, and the adductor magnus (which is half innervated by the sciatic nerve and half innervated by the obturator nerve). When the sciatic nerve reaches the superior border of the popliteal fossa, it divides into the tibial and common peroneal nerves.

The posterior femoral nerve is the fourth branch of the sacral plexus and is also known as the posterior cutaneous nerve.

It has three spinal nerve contributions: S1, S2, and S3.

It leaves the pelvis via the greater sciatic foramen, inferior to the piriformis. It then travels inferiorly, deep to gluteus maximus, and down the posterior thigh to the knee.

The posterior femoral nerve has no motor functions.

Its sensory innervation includes the posterior surface of the thigh and lower leg, as well as the perineum.

The pudendal nerve is the fifth and final branch of the sacral plexus.

It has contributions from three spinal nerves: S2, S3, and S4.

The sensory functions of the pudendal nerve include the penis, the clitoris and the skin of the perineum.

Other Branches of the Sacral Plexus

Along with the five major peripheral nerves produced by the sacral plexus, there are a number of smaller branches that are not shown on the diagram. They are generally nerves that are directly supplying muscles:

Except for the Pelvic Splanchnic Nerves, which provide parasympathetic innervation to the hindgut.

Pathologies of the Sacral Plexus

Damage to the Lumbosacral Plexuses

Damage to the lumbar or sacral plexuses (or both) can be very serious and are suspected when the symptoms shown cannot be localised to a single peripheral nerve region.

It can present with neuropathic pain, numbness, weakness or wasting of muscles.

One of the main causes is diabetic amyotrophy, also known as lumbosacral radiculoplexus neuropathy. It occurs when the nerves are damaged by high levels of blood sugar. High dose corticosteroids may be useful in treatment to reduce the inflammation surrounding the nerves and ease symptoms.

Another cause is local invasions, such as tumours. Unfortunately, the only treatment for this is surgery to remove the obstruction, but this can be dangerous as there is a high risk of further damage to nerves occurring.

Piriformis syndrome is a clinical syndrome caused compression of the sciatic nerve by the piriformis muscle resulting in; pain, numbness and muscle weakness. Treatment options can range from analgesia and physiotherapy, to corticosteroid injections, to intraoperative relief of pressure.