Regeneration and Repair of Tissues

Next Lesson - The Lymphatic System

This article will explain how tissue regeneration and repair occurs, and some defects that may affect it.

Regeneration allows replacement of damaged tissue through cell replication and growth of tissues. The end result of regeneration is as if nothing happened - this tissue will be normal. Tissues can regenerate completely after injury if there is:

If the injury is too extensive, or the harmful cause persists then regeneration will not be able to occur. This will result in formation of a scar after the process of organisation - healing by primary or secondary intention.

The ability of a tissue to regenerate depends on the stem cell population, which are cells that can differentiate and replace cells that have been lost to injury or normal senescence. They are present in small, discrete populations. For example, in the basal layer of epidermis, or at the bottom of intestinal crypts. 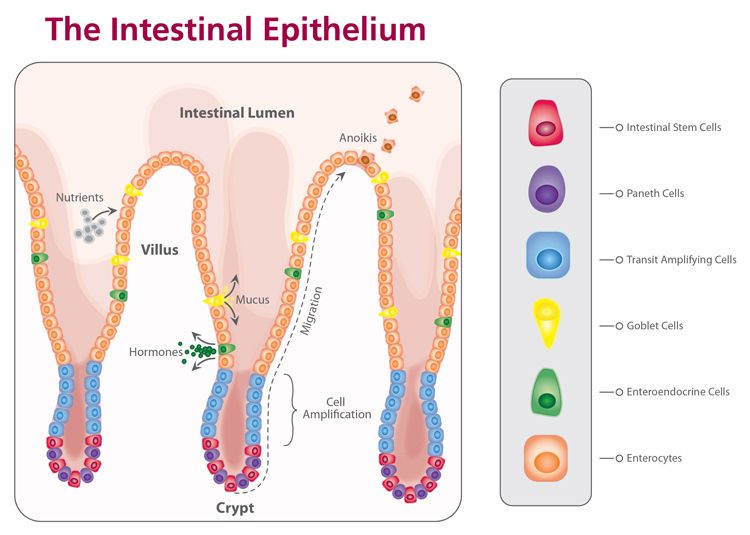 Diagram - The bottom of intestinal crypts where stem cells are found. The stem cells can divide and differentiate to replace lost cells of the intestinal epithelium.

When stem cells undergo mitosis, one of the daughter cells remains as a stem cell and the other differentiates to become a mature cell to meet the needs of the tissue it is in. This is asymmetric replication.

Stem cells can be classified according to how many types of other cells they can differentiate into.

Cells can be organised into 3 different groups depending on their proliferative activity. These are:

Regeneration can take place in tissues with labile and stable tissues when tissue damage isn’t extensive. The presence of stem cells makes this possible, as they can divide and differentiate to replace the lost cells.

Cell to cell communication occurs via local mediators such as growth factors, hormones or by direct cell-cell or cell-stroma contact. This communication allows control of regeneration.

Growth factors are a type of local mediator, and are important in regeneration and fibrous repair. Growth factors are polypeptides which are coded for by proto-oncogenes. The act in an autocrine (acting on the cell itself that secretes the growth hormone) or paracrine (acting on cells a short distance away) manner. They stimulate or inhibit cell proliferation through binding to specific receptors to stimulate gene transcription.

Cells will continue to replicate until there are other cells touching them. This ensures that there is no overlap of cells. There are proteins called adhesion molecules which bind cells to each other (cadherins) or to extracellular matrix (integrins). These proteins are altered in malignant cells which causes cancer to proliferate uncontrollably.

Whilst regeneration involves the growth of a tissue back to it's normal sate, organisation is the process by which specialised tissues that have suffered damage undergo fibrous repair to form a scar. It requires collagen which is synthesised by fibroblasts and myofibroblasts. Depending on the extent of the tissue damage, organisation can take place by either primary or secondary intention, but the general process remains the same: 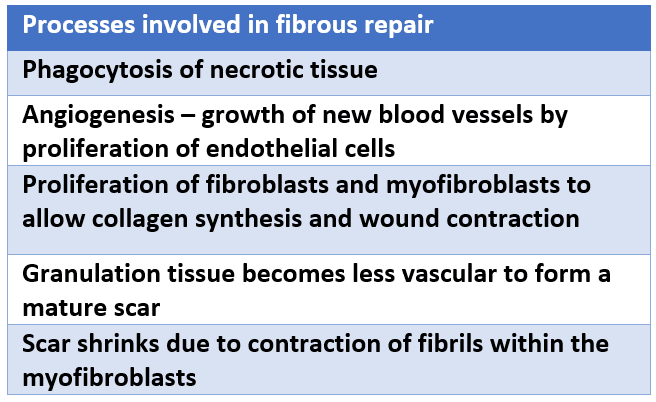 Table - The processes in fibrous repair from initial injury to the formation of a scar.

Histology of granulation tissue can be seen in the image below: 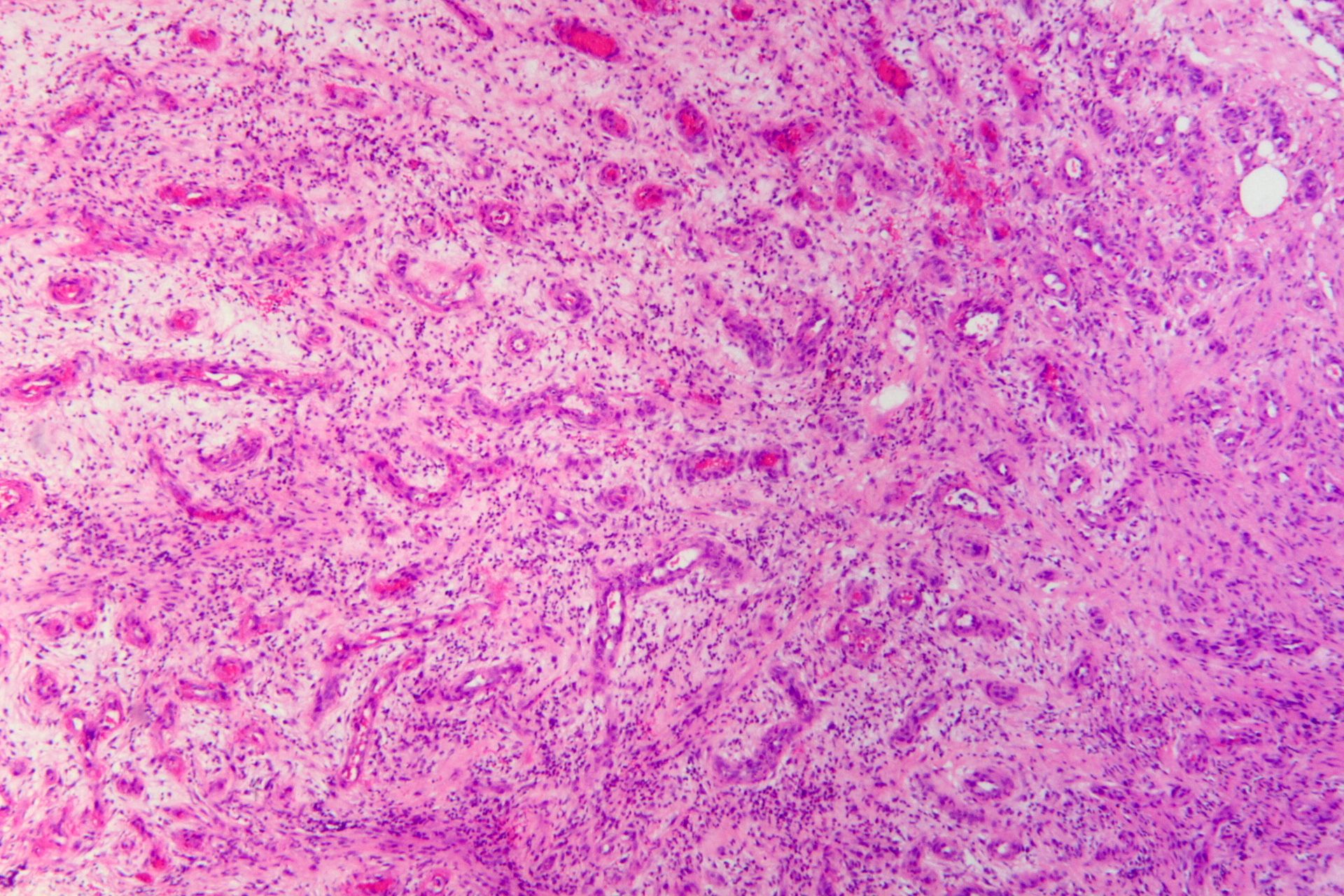 Image - The histology of granulation tissue in an infected wound. There are many blood vessels and immune cells.

This can occur in clean, non-infected wounds with opposed edges. These wounds result in the death of a limited number of epithelial and connective tissue cells, and the disruption to the basement membrane.

This occurs in wounds with tissue loss, separated edges or infected wounds. The wounds are filled by abundant granulation tissue which forms the margins of the wound. The same processes occur as in healing by primary intention, however, there is a more intense inflammatory process, and considerable wound contraction. The wound contracts towards the centre which means that the final scar takes on the shape of the original wound. 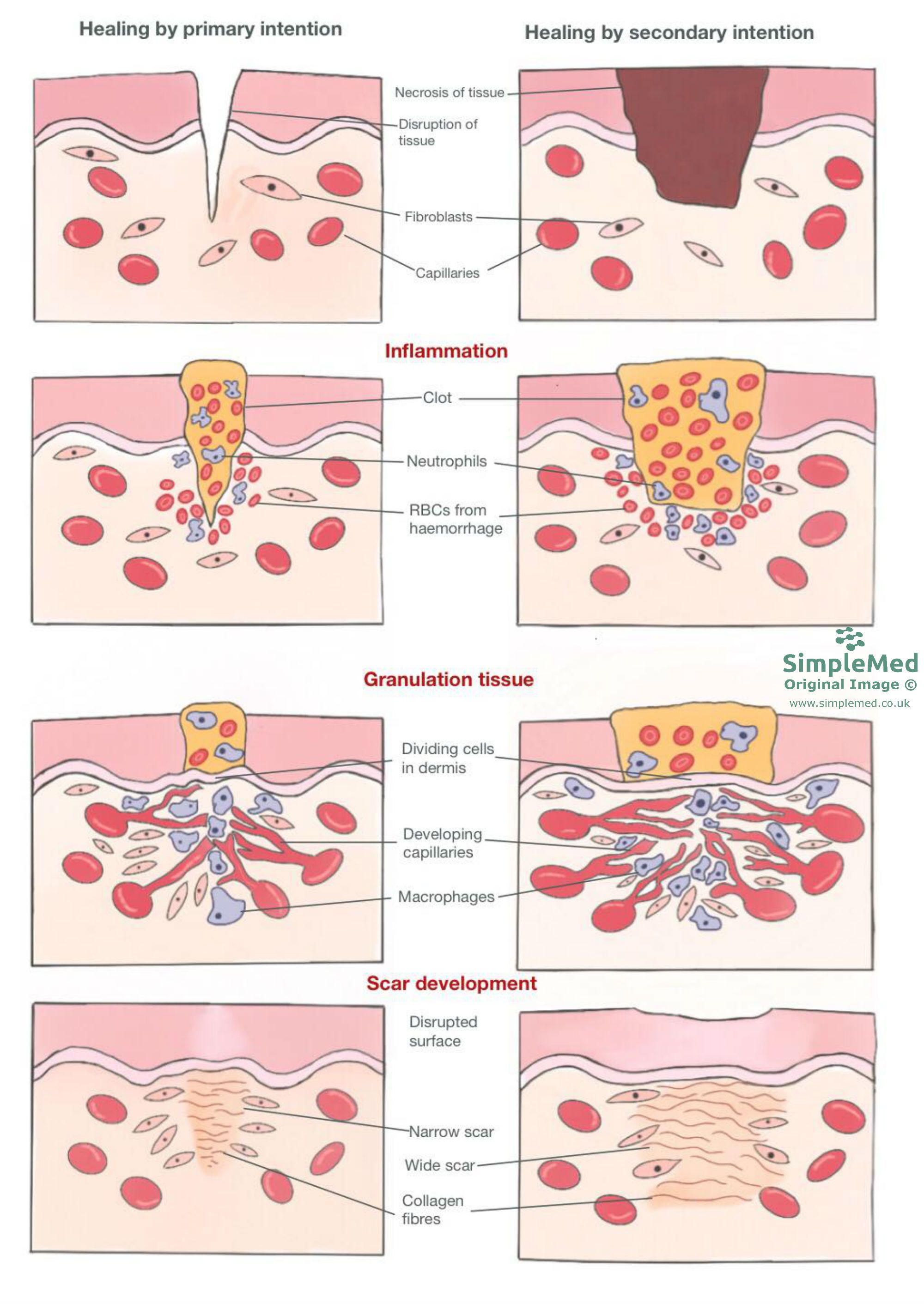 Formation of adhesions (fibrous bands between or around structures): 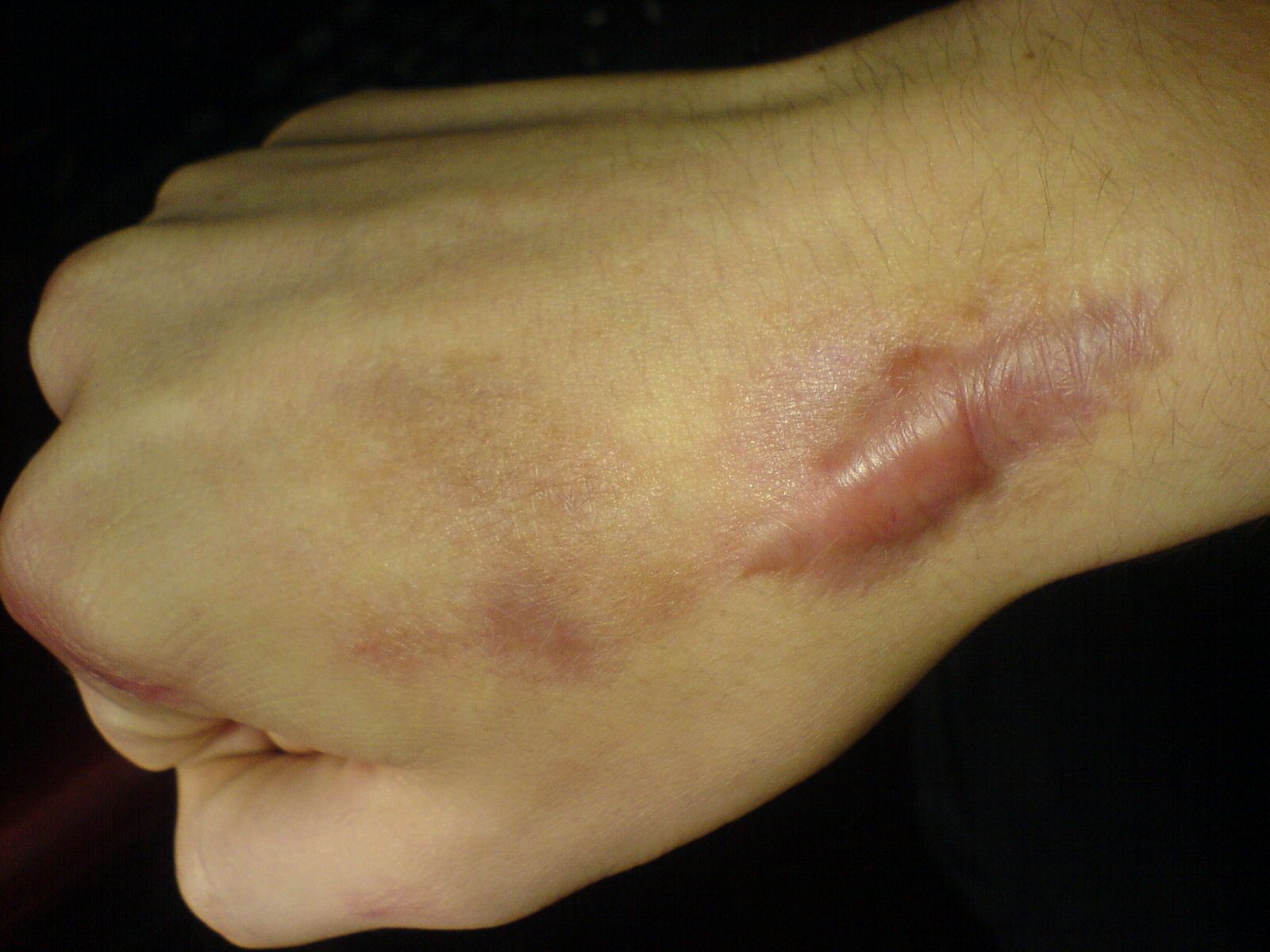