Next Lesson - Energy Reactions in Cells

Defined as the chemical processes that occur within a living thing to keep that thing alive. There are four main pathways of metabolism:

There are also two classifications of metabolic processes:

Energy is the capacity to do work. In humans, this energy is stored in chemical bonds.

All living things require energy for: 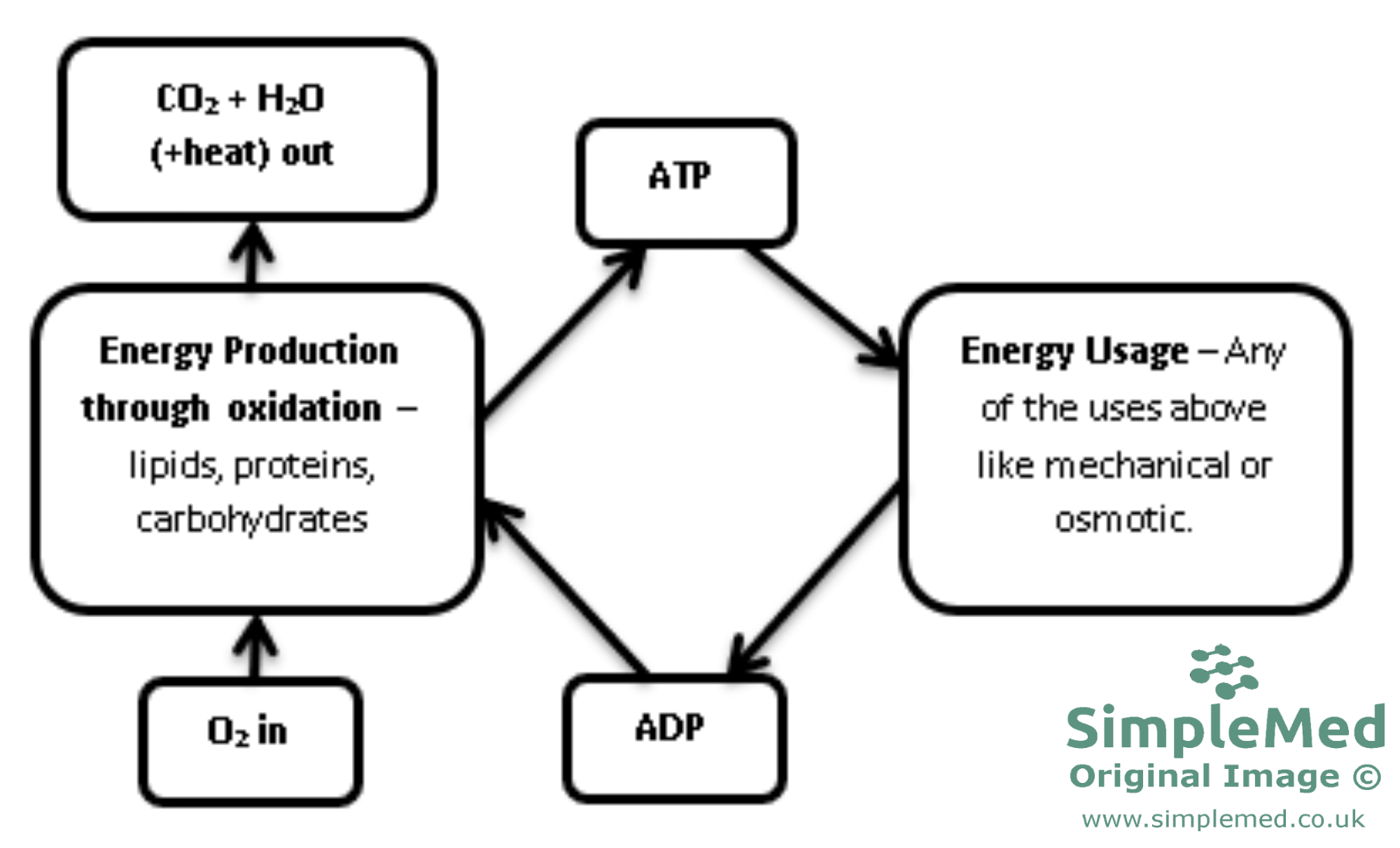 Diagram - The ATP-ADP cycle. Here you can see how energy production and usage are linked

The kilojoule (kJ) is the standard unit of food energy, but the general public use the term ‘calorie’. This can get confusing, since ‘one calorie’ is a term used in physics, whereas the calories written on food containers are really referring to kilocalories - which are just referred to as calories for short.

So 1kcal (referred to as a calorie by the public and food packaging) = the amount of energy needed to raise the temperature of one kilogram of water by one degree Celsius.

Proteins are made up of amino acids in a chain, joined by peptide bonds. Digestion breaks these peptide bonds, to allow for the amino acids to be absorbed into the blood. There are 20 amino acids, some of which we can make through chemical reactions within the body, others of which we can’t. The ones we cannot produce are called essential amino acids, and can be found in the table below, along with a helpful mnemonic for learning them. 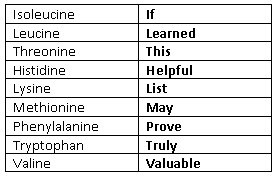 The kicker is that some amino acids are ‘Conditionally Essential’. This means that although the body can synthesise these amino acids, it cannot do so in high enough quantities in the body, so they become essential in the diet. Children and pregnant women (i.e. those with a comparatively high rate of protein synthesis) also need arginine, tyrosine and cysteine.

Electrolytes are salts and minerals in the body used to establish ion gradients across membranes and maintain water balance. They have many important functions, such as:

Vitamins are dietary substances which are essential for life, so any deficiencies can lead to disease. They are divided into fat soluble and water soluble.

Fibre is found in plant material that forms cereal type foods (bread, beans), and is composed mainly of cellulose, a polymer of glucose. However, unlike starch and glycogen which feature α1-4 and α1-6 glycosidic bonds, cellulose contains β1-4 bonds, which humans cannot break down. This means we do not absorb the glucose from cellulose, but it is still needed for a healthy GI tract. It helps prevent:

There are some definitions that are required knowledge regarding nutritional requirements. They are worked out based on group data plotted onto a graph and standard deviations are used. They will change based on age, activity level, and gender.

Reference Nutrient Intake (RNI) – enough to ensure the energy needs of 97.5% (2SD) of the population are met.

Estimated Average Requirement (EAR) – enough energy intake for 50% of the population (50% will need more than this). This is the average requirement (median).

Lower Reference Nutrient Intake (LRNI) – Enough energy for only 2.5% of the population (2SD down), therefore the majority of people need to eat more than this.

Dietary reference values (DRV) – the decided amount of a nutrient it is recommended people eat.

Energy requirements vary depending on age, gender, body composition and level of physical activity. It is the sum of:

Obesity is the excessive fat accumulation in adipose tissue, which could impair health, usually measured in BMI (see table), a ratio of height to weight (the formula is shown below). It is the same for men and women. Obesity is the biggest cause of preventable death in developed countries because it increases the risk of CVD, type 2 diabetes, cancers etc.

BMI is measured in kg/m2.

BMI as a measurement is known to have flaws, in that it may wrongly classify muscular people as obese. An alternative measurement is the waist to hip ratio which should be >0.85 in women and >0.9 in men. This tests more accurately for the distribution of body fat which is another important factor in pathology. Central adiposity has an increased risk of type 2 diabetes, hypertension, hyperlipidaemia, stroke and premature death compared to fat stored around the hips.

Malnutrition is a major preventable cause of death in the developing world but is still seen in Britain. A low protein diet with near normal energy consumption can lead to Kwashiorkor, a disease where low blood protein leads to low plasma oncotic pressure, and severe pitting oedema (often seen around feet, ankles and the abdomen). The oedema can mask muscle wasting. Patients with kwashiorkor will also have a fatty liver due to lack of lipid transport molecule synthesis. Marasmus is another disease of malnutrition, but is a universal deficiency, not just in proteins, leading to an emaciated appearance.

A dietician should be consulted when treating malnutrition to prevent re-feeding syndrome, a condition caused by rapid reintroduction of rich food which can rapidly lead to coma and death. The pathophysiology is poorly understood but it is suspected that down regulation of nitrogen disposal pathways is implicated.