Haematopoiesis and the Spleen

By Keertana Anne and Tom Bradley

Haematopoiesis is the production of mature blood cells (red blood cells (RBCs), platelets and the majority of white blood cells (WBCs)) from stem cells occurring in the bone marrow. In infants, it takes place throughout the skeleton, while in adults there is a more limited distribution namely the axial skeleton (bones of the skull and trunk) including the pelvis, sternum, skull, ribs and vertebrae. 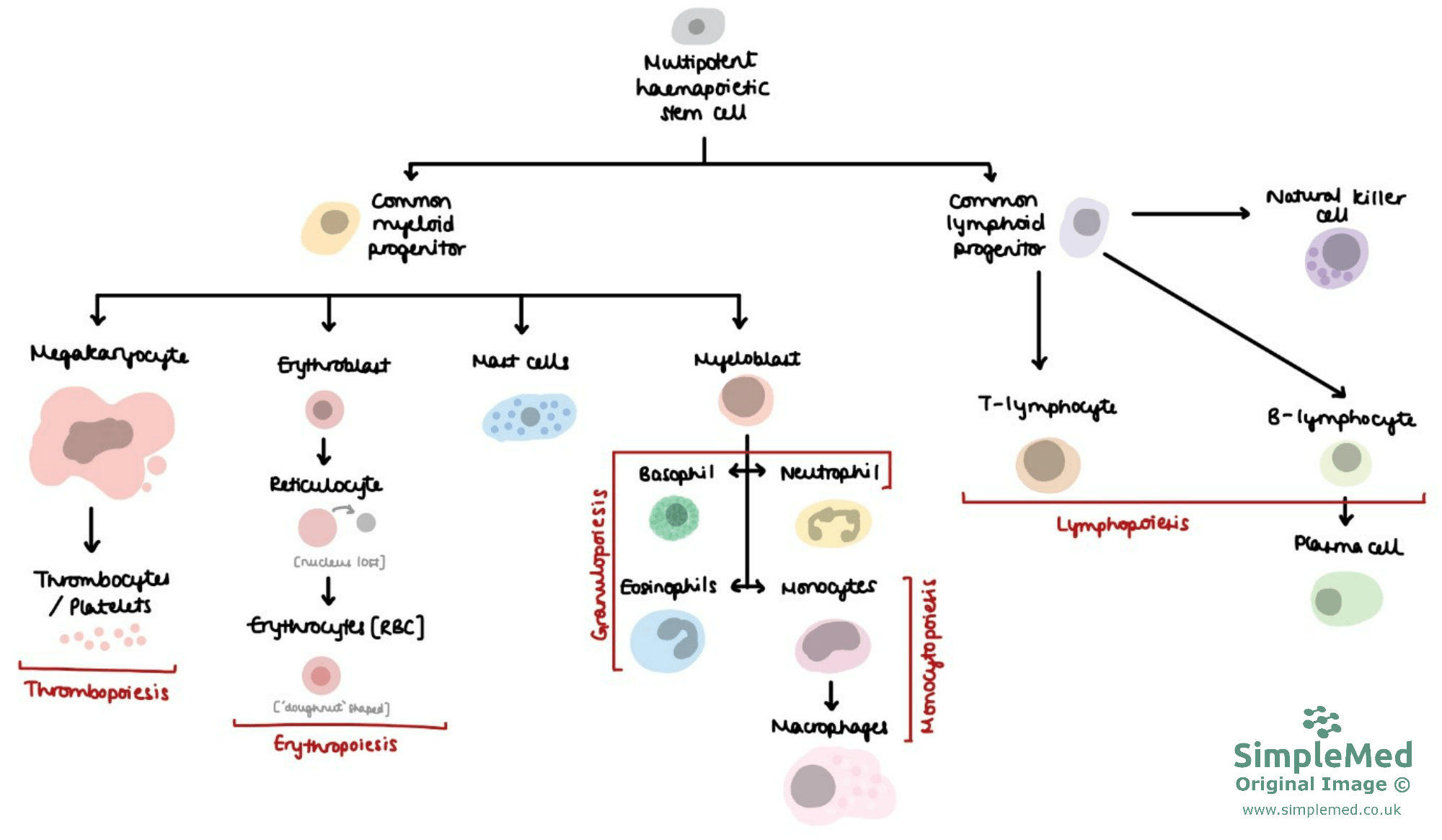 Erythropoiesis is the continuous process of erythrocyte production. Erythrocytes or red blood cells transport oxygen around the body.

Erythrocytes classically have a biconcave structure with a diameter of 8µm. Their small size coupled with their shape helps them to squeeze through the small lumen of capillaries. Erythrocytes are enucleated cells (without a nucleus), which allows more space for haemoglobin to be contained within each erythrocyte (95% of the cell volume is taken up by haemoglobin).

See our article on biological membranes for more information on the structure of the erythrocyte cell membrane and the various diseases can result from alterations in membrane structure.

Haemoglobin is a globular protein with a tetramer structure of two pairs of globin chains – in an α2β2 structure. Each chain has its own essential prosthetic haem group (a protoporphyrin ring and an iron atom). One molecule of O2 binds to the haem group and causes movement of the iron into the plane of the ring, and a conformational change in the structure.

Deoxyhaemoglobin exists in low affinity (T – tense) state or high affinity (R – relaxed) state. When oxygen binds to haemoglobin, it converts from the T state to the R state, allowing oxygen to bind much more easily – this especially favours oxygen loading in the lungs where there is a very high pO2, and the release of oxygen at the tissues where there is a very low pO2. Each haemoglobin molecule can bind 4 O2 molecules.

Each red blood cell has a lifespan of 120 days therefore frequent erythropoiesis is required to replenish the supply of RBCs in the blood.

RBC’s cannot undergo mitosis due to their lack of a nucleus; the process of erythropoiesis is as follows:

B and T lymphocytes are cells of the lymphatic system (even though they can be found in the bloodstream).

B lymphocytes are a type of WBC that assist in the adaptive immune response of the body. They are able to recognise non-self-antigens and produce a large number of antigen specific antibodies. The development of B lymphocytes begins in the fetal bone marrow and liver. These then continue to mature in the bone marrow (unlike T-cells), where they remain until they are required during an immune response.

T lymphocytes are another type of WBC that have a key role in the body’s immune response. These also arise from the bone marrow but migrate to the thymus gland, where they develop and mature.

For a more detailed explanation of the action of lymphocytes, take a look at our article on adaptive immunity.

This is the process of platelet (or thrombocyte) formation. Platelets are key in the process of blood clotting. Platelets form by budding off from the membrane of megakaryocytes (derived from CMP cells). This is driven by the hormone thrombopoietin (TPO).

Monocytes are phagocytic cells which circulate in the blood. They are derived from the myeloblast, which in turn is derived from common myeloid progenitor. Blood monocytes leave the blood circulation after 20 hours and become known as tissue macrophages, which have a phagocytic action.

The granulocytes are a family of white blood cells made up of basophils, neutrophils and eosinophils. Granulocytes are all white blood cells involved in microbial clearance. They all have large quantities of cytoplasmic granules within the cells, each containing inflammatory markers. These cells have the same pathway of formation as the monocytes; common myeloid progenitor followed by myeloblasts.

The spleen consists of red pulp which removes old red blood cells and metabolises haemoglobin; and white pulp which forms antibodies (formed of lymphoid tissue) and removes any bacteria or erythrocytes coated in antibodies. The spleen is particularly effective against encapsulated bacteria. White cells and plasma preferentially pass through the white pulp and red blood cells pass through the red pulp.

Another useful function of the spleen is blood-pooling. This is when platelets and red cells from the body are mobilised in the spleen during a period of bleeding, in order to minimise blood loss.

Splenomegaly – Enlargement of the Spleen

This process usually occurs when the spleen has an increased workload (e.g. overworking red or white pulp). Other causes include:

A healthy spleen should not be palpable as it will lie under the ribs. An enlarged spleen is palpable usually in the left hypochondrium, and it will no longer be protected by the ribs. Therefore, the risk of rupture is increased. Splenic rupture is life threatening as it will cause a large amount of internal bleeding due to the spleens rich blood supply. If untreated this can cause haemodynamic shock and death. Patient’s with splenomegaly are encouraged to avoid activities (such as contact sport) that may cause splenic rupture.

Hyposplenism – Reduction in the Function of the Spleen

There are multiple causes of hyposplenism including:

Hyposplenic or asplenic patients have an increased risk of developing sepsis, especially from encapsulated organisms (Neisseria meningitidis, Streptococcus pneumoniae & Haemophilus influenzae). This is as the white pulp is no longer present to remove the encapsulated bacteria allowing them to proliferate in the blood and manifest as sepsis. Hyposplenic patients therefore are usually given various vaccinations, prophylactic antibiotics and should carry a card notifying medical staff of their condition.

A typical blood film for hyposplenic patients will contain RBCs with Howell-Jolly bodies (remnants of DNA still in the cytoplasm). This is indicative of damage to the spleen as a normally functioning spleen would remove these defective cells as they were filtered through. 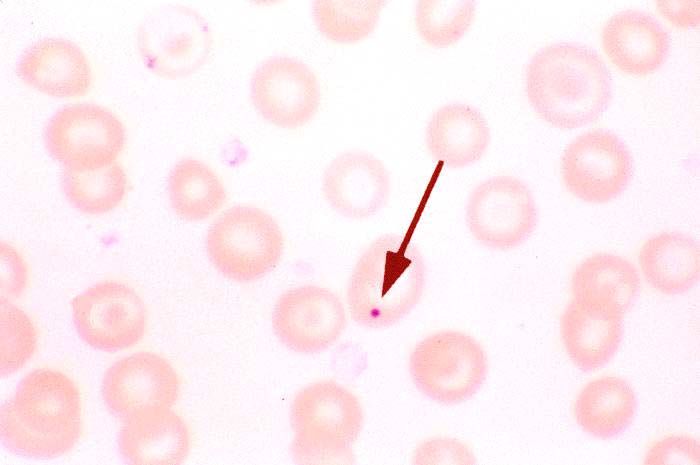