Next Lesson - Sex, Infertility and Contraception

Gametogenesis – the process of making sex cells (gametes) through meiosis. This occurs in the testes in males, and in the ovaries (and the fallopian tubes) in females.

Spermatogenesis is the process that creates sperm from primordial germ cells in the testicles. It has a number of steps, which are listed below and included in the diagram:

Spermiation is the outcome of spermiogenesis. Spermiation occurs when the spermatids are released into the lumen of the seminiferous tubules. They then pass through the rete testis and ductuli efferentes and into the epididymis. Spermatids are not mobile until they pass through the epididymis. Before this, they are transported by Sertoli cells secretion and peristalsis, and once they undergo spermiation, they are mobile and are mature sperm cells. 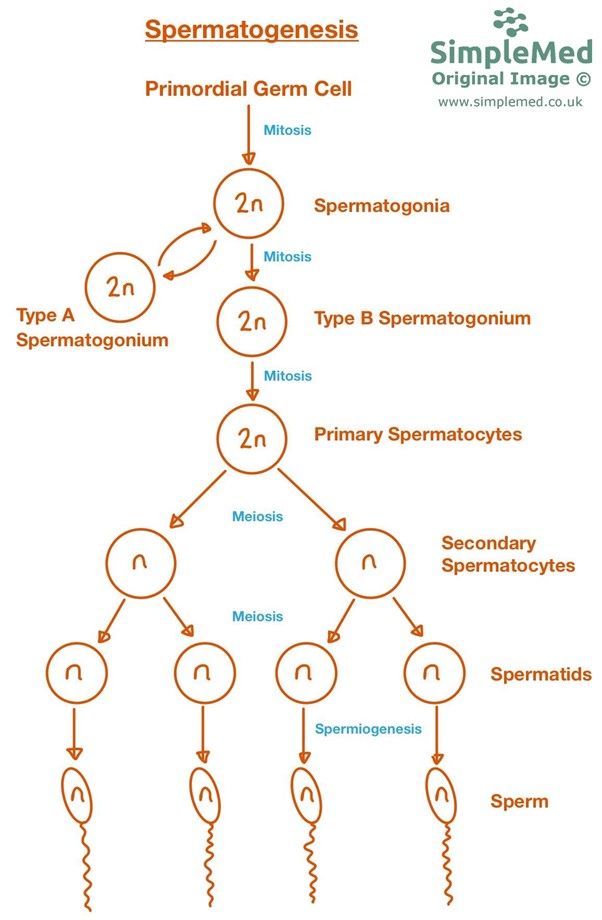 Capacitation of sperm is the final step before sperm becomes able to fertilise an oocyte. Capacitation occurs in the female reproductive tract following ejaculation. It involves the removal of glycoproteins and cholesterol from the sperm membrane and activation of signalling pathways inside the sperm cells. Removal of the glycoproteins allows the sperm to bind to the zona pellucida of the oocyte and initiate the acrosome reaction. This is the process that allows the sperm to penetrate the egg cell and begin fertilisation.

Capacitation is an important consideration in in vitro fertilisation (IVF). As the sperm never encounters the female reproductive tract before meeting the egg, the sperm must be treated in a capacitation medium to trigger the process artificially.

Not all the stages of spermatogenesis are visible histologically in a single cross-section of a seminiferous tubule. This observation confirms that sperm is produced continuously rather than batch produced.

The spermatogenic cycle is the time taken for the same stage of spermatogenesis to appear in the same segment of the seminiferous tubule. Simply put, how long it takes to produce one fully mature sperm cell from a spermatogonium. In humans this takes around 16 days.

The oocyte (pronounced o-o-cyte not oo-cyte) is the female gamete and is also known as an egg cell. A woman is born with all her oocytes formed but not fully developed in her ovaries. This stock declines after birth with age due to atresia (cell death).

Formation of oocytes begins before birth. Germ cells differentiate into oogonia and proliferate by mitosis. The oogonia then begin meiosis, but arrest in prophase I (meaning they have replicated their chromosomes but not commenced division). At this point, the oogonia become primary oocytes. These primary oocytes number approximately 2 million, and each one is surrounded by a flat layer of epithelial cells called follicular cells. The primary oocytes surrounded by follicular cells are named primordial follicles.

Most of these primordial follicles undergo atresia during childhood, leaving approximately 40,000 in the ovaries by the start of puberty. From puberty onwards, 15-20 oocytes mature each month, passing through the following three stages:

As primordial follicles grow, the epithelium changes from flat to cuboidal. A number of new cell types develop: granulosa cells secrete a glycoprotein layer named zona pellucida, and the theca interna cells become paracrine tissue, going on to produce testosterone under the influence of LH so granulosa cells can turn it into oestrogen.

As development continues, fluid filled spaces appear between granulosa cells, which coalesce to form the antrum (the name for the largest fluid filled sac). Several follicles (15-20) begin development every menstrual cycle but only one progresses to the preovulatory stage.

Ovulation occurs when the graafian/ovarian follicle (the follicle containing the secondary oocyte) becomes approximately 2.5cm in size. The LH surge increases collagenase activity (an enzyme that breaks down collagen), and prostaglandin release causes ovarian wall contractions. This causes the oocyte to be extruded from the ovary in a traumatic release.

Preventing ovulation can therefore be a protective factor for ovarian cancer, meaning that multiparous women (women who have had more than one child, ovulation pauses during pregnancy) and women who use birth control methods that prevent ovulation (such as the combined oral contraceptive pill) are at a lower risk of ovarian cancer.

Mittelschmerz or ovulation pain which occurs on ovulation. It is unknown what specifically causes the pain. One theory is that fluid or blood from the follicle irritate the abdomen. Alternatively it is though that if the epithelium of the ovary is too well innervated when the oocyte traumatically ruptures from the ovary it can cause pain. The term gets its name from the fact that the painful ‘schmertz’ ovulation occurs on the 14th day of the cycle, in the middle ‘mittel’ of the month. It is important, however, that abdominal pain in a woman is not dismissed to be Mittelschmerz pain. 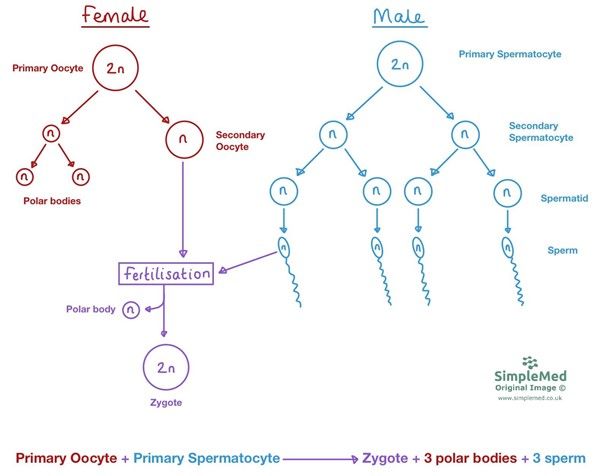 Diagram - Processes from meiosis to fertilisation

The corpus luteum (lit. ‘yellow body’) is formed from the remains of the ovarian follicle (graafian) including the remaining granulosa and theca interna cells. As the cells become vascularised they change into yellow coloured lutein cells. The corpus lutetium secretes oestrogen and progesterone, which stimulates the uterine mucosa to enter the proliferative stage to prepare for implantation of the fertilised oocyte.

If the corpus luteum does not receive β-hCG signals from the implanted zygote (oocyte and sperm combo) within 14 days, it dies and turns into the corpus albicans.

The corpus albicans (lit. ‘white body’) is essentially scar tissue formed from the regressed corpus luteum and does not release progesterone. As a result the endometrial lining breaks down which is observed as menstruation.

Table - Differences between spermatogenesis and oogenesis