This article explains the practical basics of how muscles work mechanically. By understanding the basics of muscle action the movement of any muscle can be predicted. For more information on the physiological make up of muscles, please see the article on The Structure of Muscles.

In this article, any use of the word ‘muscle’ refers to skeletal muscle. For more information on different types of muscle (smooth and cardiac), see the article on The Structure of Muscles.

Origin and insertion are two terms used to describe where a muscle attaches.

The ‘origin’ is the stationary attachment point. Using the sartorius muscle as an example, the origin would be the anterior superior iliac spine. When the muscle contracts, this point is stationary (the pelvis does not move). This attachment is also the more proximal point of the two attachments (closest to the trunk of the body).

The ‘insertion’ is the mobile attachment point. Again, using the sartorius muscle as an example, the insertion would be the medial side of the tibia. When the muscle contracts this point moves to produce the action of the sartorius muscle. This attachment is also more distal than the other (furthest from the trunk of the body).

Typically, all movements of muscles are described as beginning in the anatomical position. This is the position described as the ‘at rest’ position of the body: the whole body facing forward, looking forward, feet forward, palms forward (see our anatomical terms article for more detail).

There is a debate surrounding the definitions of origin and insertion because proximal and distal are used, but this is not always the case. For example, if the hand was stuck in a big pot of glue on a table, the elbow would be more mobile than the glued wrist, meaning that any muscles of the forearm would have their origin and insertion switched (because the most proximal part becomes the most mobile). This is more of a thought experiment than anything, and the above method with the proximal and stationary attachment being the origin should be used.

Muscles also can only work if their contraction will actually move something. For example, a muscle that has both its attachment and insertion on the femur will not be able to achieve anything with contraction, because the muscle would have to crush the bone to contract. This means that muscles cross joints, which allows their effects to be predicted.

Muscle actions can be determined by answering these questions:

There are four main types of muscle found in the body, and they are categorised by the organisation of the myocytes.

Parallel muscles have myocytes that run all in the same direction, creating a thin, rectangular muscle. An example of this is the sartorius muscle.

Fusiform muscles are similar in structure to parallel muscles, but they have an increased number of myocytes in the centre, creating a bulge. This increases the strength of the muscle. An example of a fusiform muscle is biceps brachii.

Triangular muscles are another very strong type of muscle, with all the myocytes converging on a central point. Examples of this muscle type in the body include gluteus maximus and pectoralis major.

There is another consideration when thinking about the direction of myocytes in a muscle, and this is the idea of the muscle being ‘-pennate’. This describes the number of different directions the myocytes travel in.

Unipennate muscles have fibres that only run in one direction. An example of this is flexor pollicis longus in the thumb.

Bipennate muscles have fibres that run in two directions. An example of this is soleus.

Multipennate muscles have fibres that run in multiple directions. An example of this is the deltoid muscle. 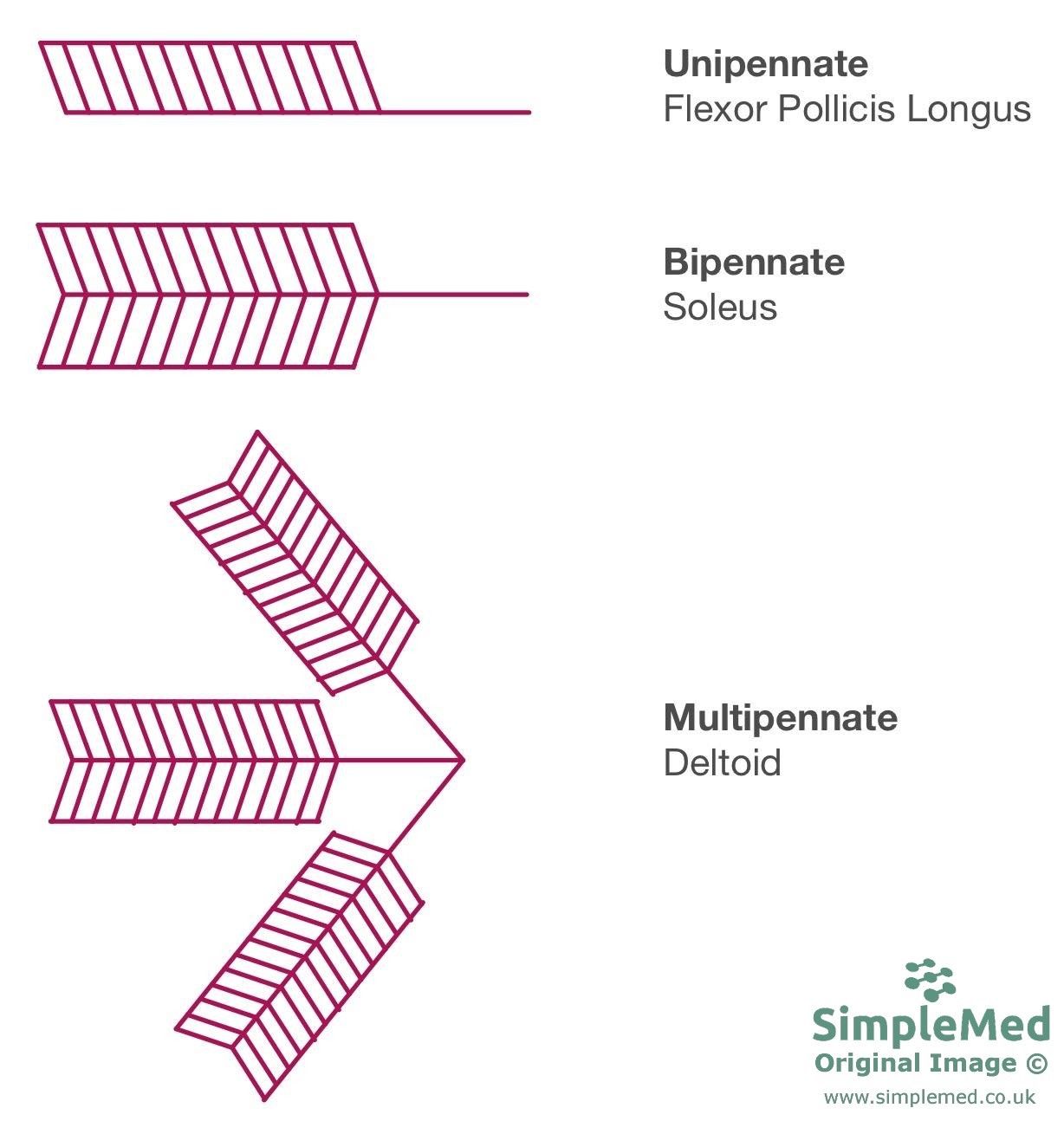 Diagram - The differences between unipennate, bipennate and multipennate muscles. The diagram has been simplified by not drawing in the full extent of the fibres in the multipennate muscle; the fibres of the strands would expand to meet each other, and fuse there to increase the strength of the muscle