A pulmonary embolism (PE) is therefore material that has moved from one part of the vasculature, through the right side of the heart, and lodges in the pulmonary arteries.

An embolus is usually made from a blood clot (thromboembolism), but can also be formed from tumour, air, fat, or amniotic fluid – note that the rest of this article will be focussing on thromboemboli. Pulmonary emboli are the third most common cause of vascular death, after myocardial infarction and stroke, and are the most common cause of preventable death in hospital patients.

90% of PEs arise from a deep vein thrombosis (DVT), a thrombus that has formed in the deep veins of the lower limb. The main factors that contribute to thrombus formation are stasis of blood flow, hypercoagulability of blood, and endothelial injury, also known as Virchow’s Triad. This means that the risk factors for a DVT (and therefore PE) are factors that will contribute to the causation of part of this triad: 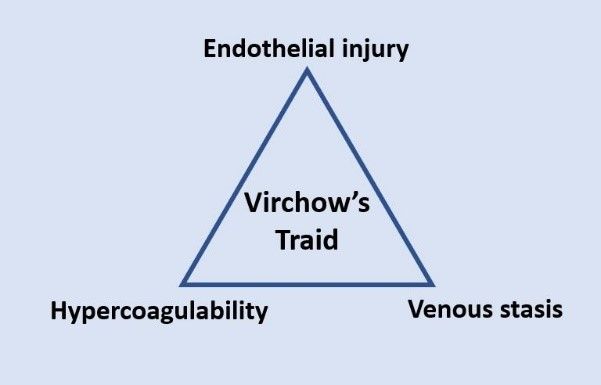 The above risk factors can be divided into those that are;

It is thought that 50% of patients with a PE have a temporary risk factor and that 25% have a permanent, but that 25% don’t have any risk factors at all. It is important to realise that prevention of a PE, for example through the use of compression stockings on a long haul flight, is extremely important, and more easily implemented than treatment.

If an embolus occludes over 30% of the arterial bed, then pulmonary arterial pressure will increase. This leads to right ventricular dilation (in accordance with the Frank-Starling curve seen in the Cardiovascular unit) and the release of inotropes in order to control the blood pressure. However, the release of inotropes causes pulmonary artery vasoconstriction, thus further exacerbating the original problem. This ‘fault’ in the body’s response to pulmonary artery occlusion is the main cause of death due to PE.

The areas of the lung that used to be perfused by the areas of now-blocked arteries no longer have a blood supply, meaning no gas exchange can take place in these areas, despite the area being well ventilated. This area has now become alveolar dead space, meaning the body will redirect the blood to other areas of the lung to be perfused. If this increased blood flow is not matched by increased ventilation, then pO2 will drop. This drop in O2 leads to hyperventilation, meaning the CO2 is adequately removed from the body. This means the patient will have low pO2 with normal or low pCO2, which can be classified as type 1 respiratory failure.

The part of the lung that is poorly perfused may undergo infarction, however, this is rare as the bronchial arteries will normally supply the tissue with adequate oxygen. If this does happen then the patient may present with haemoptysis and pleuritic chest pain.

1/3 of patients with a PE have a patent foramen ovale, a hole between the left and right atria which is normal in the fetus but has not closed properly during infancy. Due to the shunting of blood through the foramen, these patients are at risk of having a paradoxical embolism and stroke, because the clot formed in the venous system can pass through the right side of the heart, into the left side of the heart and be pumped through the aorta to the brain (stroke) or another site (paradoxical embolism).

Symptoms of a PE include:

Signs of a PE include:

Patients with a suspected PE should undergo a series of investigations:

Pulmonary emboli can be imaged through the use of a CT pulmonary angiogram or ventilation-perfusion lung scintigraphy (usually if CTPA is not available or a patient is pregnant). These should be used in conjunction with a convincing history.

A patient with a suspected PE should be given O2 immediately to increase pO2, and immediate heparinisation or direct oral anticoagulant (DOAC) administration, which reduces mortality by preventing the thrombus from propagating in the pulmonary artery and allowing the body’s fibrinolytic system to lyse the thrombus. It reduces the frequency of further embolism but doesn’t dissolve the clot already present.

Once patients have had their initial treatment for a PE, they should be started on an oral anticoagulant (e.g. warfarin or a DOAC), for either: