Lipids are a structurally diverse group of molecules which are hydrophobic and contain carbon, hydrogen and oxygen.

There are 3 classes of lipid:

The main storage form of lipid in the body is in adipose tissue. Adipose stores energy in the form of triacylglycerol (TAG, also known as triglycerides), a structure made up of one hydrophilic molecule of glycerol attached to three hydrophobic fatty acid chains.

As lipids are hydrophobic, it is not feasible to transport them freely in the blood. This means that free fatty acids are transported attached to albumin, and TAGs being produced in the liver are transported in lipoproteins. This allows the TAGs to be targeted to the peripheral tissues that need them. Lipid transport is explained later in more detail.

Table - The different types of lipoproteins found in the body

Fatty acids have the general structure of CH3(CH2)nCOOH. The carbon chain is commonly between 14 and 18 carbons long, and can have many variable features, such as being saturated or unsaturated, or amphipathic (a mix of hydrophobic and hydrophilic parts). Fatty acids are transported into the mitochondria through the carnitine shuttle, a transporter that crosses the double membrane of the mitochondria. It involves the association and dissociation of the fatty acid with CoA and cartinine (an ammonium compound) meaning the fatty acid can be carried across the two membranes.

Once inside the mitochondria, the fatty acid is catabolised through a process called beta oxidation. With each cycle of beta oxidation, a two-carbon molecule is liberated from the fatty acid (making the fatty acid 2C shorter each time until it has been completely broken up). This molecule goes on to become acetyl CoA, which is used in the Krebs Cycle to generate energy.

During the process of beta oxidation, NADH and FADH2 are made which can be used to produce energy in the electron transport chain.

The metabolism of lipids does not occur in the brain (because fatty acids cannot cross the blood-brain barrier) or red blood cells (because they have no mitochondria).

Glycerol is a component of TAGs. This diagram shows how NADH is produced from glycerol to be used for ATP production in the electron transport chain. The metabolites of glycerol are used to produce intermediates for use in glycolysis and triacylglycerol synthesis.

Diagram - The metabolic pathway of glycerol to be used in glycolysis

Ketone bodies are water soluble molecules produced by the liver. There are three types: acetoacetate, acetate and β-hydroxybutyrate.

They can act as an alternative substrate in starvation (physiological ketosis) or untreated type 1 diabetes mellitus (pathological ketosis). This occurs in cases such as starvation. In starvation as there is no glucose intake and therefore no available glucose for the brain, and as lipids cannot cross the blood-brain barrier, ketone bodies are required as they can cross the blood-brain barrier. The brain will accept these as an energy source in times where glucose is in short supply.

Lipids eaten in the diet are hydrolysed in the small intestine by pancreatic lipases and then transported across the brush border into the lacteals (lymphatic vessels which transport digested fat, all other substances are transported in the blood). Lipids are transported in chylomicrons as TAGs and can be stored in adipose tissue if there is plenty of glucose (i.e. they are not needed as a fuel source immediately).

This diagram shows the fatty acid cycle as it occurs in adipose tissue. It illustrates how, with a constant supply of glucose, the stored fatty acids are not static (they are continually cycling).

However, if the supply of glucose is too low, reaction 3 cannot take place (because there is no glycerol-1-phosphate being released), so the fatty acids and glycerol exit the cycle and are released into the blood to be used as an alternative fuel source.

This release of fatty acids and glycerol is under hormonal control triggered by glucagon (released when glucose levels are low), which activates the hormone-sensitive lipases to break down the triglyceride to provide an alternative fuel source.

Diagram - The metabolic pathway of the storage of TAGs in adipose tissue. Glucose is taken up by adipocytes and turned into triglycerides, which can be released as fatty acids and glycerol when blood glucose is low

This diagram shows the formation and metabolism of chylomicrons. Lipid moves from the small intestine to the lymph via lacteals in the villi, and then is emptied into the blood via the thoracic duct into the left subclavian vein. At the walls of capillaries, chylomicrons are partially metabolised by lipoprotein lipase, supplying lipid to cells that need it. Once the lipid content of the chylomicron falls below 20%, it becomes a chylomicron remnant, and travels to the liver to finish being broken down.

Diagram - The pathway of chylomicrons from the small intestine, to the lymph, to the blood in order to release fatty acids and glycerol to tissues. When the chylomicron becomes depleted, it becomes a remnant and travels to the liver for metabolism

This diagram shows how cholesterol and TAG produced in the liver travel around the body to supply muscles and fat stores.

LDL enters hepatocytes or cells that need cholesterol and express receptors for the ApoB-100 ligand on the LDL. The LDL gets taken into the cell by endocytosis, and then is digested by lysosomes.

LDL is also known as 'bad cholesterol'. This is because it has a long half-life which can be detrimental as it will be present in the blood long enough to be oxidised. This involves being phagocytosed by macrophages to form foam cells and can contribute to atherosclerosis. This is the reason that having a low level of LDL cholesterol is good, because it means that the risk of forming these foam cells is reduced, so the risk of atherosclerosis is reduced. 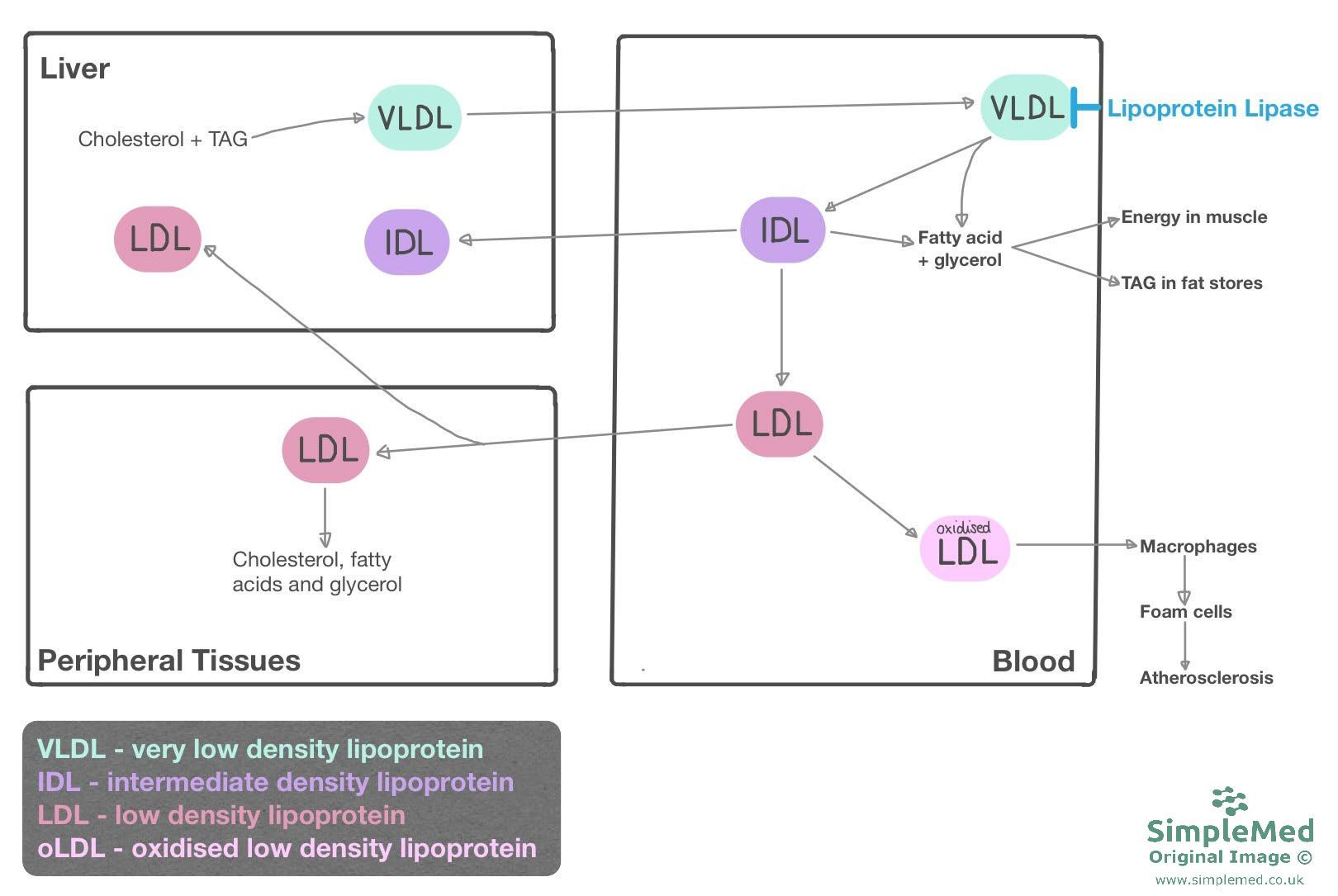 Diagram - The pathway of lipoproteins in the body. Lipoproteins deliver TAGs to peripheral tissues using the enzyme lipoprotein lipase. The diagram also shows how LDL can become oxidised and contribute to the formation of atherosclerotic plaques

Diagram - The pathway of HDL particles through the body to collect excess cholesterol from body cells and LDL particles, and deliver cholesterol to cells that need it

Included here are three diseases relating to lipid metabolism. This is not an exhaustive list, but they act as examples of how impaired lipid metabolism can lead to pathology . For more information see the article on Atherosclerosis.

Hyperlipoproteinaemias are a group of diseases that present with high levels of one or more class of lipoprotein caused by overproduction or under-removal. There are six types and each one has a different defective component. Here are three examples:

Treatments for hyperlipoproteinaemias include improving diet, increasing exercise, statins (inhibiting an enzyme used in cholesterol production called HMG CoA reductase, to reduce the amount of cholesterol synthesised), and bile salt sequestrants (keeps bile salts in the intestine leading the liver to increase production and thus use up excess cholesterol in the blood to make more).

Hypercholesterolaemia patients present with very high levels of cholesterol in the blood, which can manifest characteristic external signs such as xanthelasma (yellow patches on the eyelid), tendon xanthoma (nodules on tendons), and corneal arcus (a white line around the iris). These signs are due to the deposition of cholesterol in tissues.

Raised serum LDL is associated with the formation of atherosclerotic plaques. This happens due to the longer half-life of LDL, giving LDL a higher chance to become oxidised and phagocytosed by macrophages to form foam cells. This can lead to the narrowing of arteries, which can cause angina, and the formation of atherosclerosis can increase the chances of thrombus formation, leading to an MI or a stroke.