Next Lesson - The Immunocompromised Host

Globally, HIV is a major public health concern and has proven to be a great challenge since it was first identified in the early 1980s. Despite an estimated decrease in incidence (new cases), prevalence (total cases) of HIV is increasing worldwide as life expectancy with the disease has increased with new treatments. To illustrate the scale of the disease, it is believed that 36. million people were living with HIV in 2016, of which 1.8 million were new cases and only 75% of people were aware of their status (source).

HIV (Human Immunodeficiency Virus) is a retrovirus that belongs to the Retroviridae family, Lentivirus genus.

HIV specifically affects cells of the immune system specifically CD4 cells (a type of white blood cells). After hijacking the cell’s machinery in order to replicate the cells are destroyed. Extent of the infection is estimated by the patient’s CD4 T-cell count. A normal range of CD4 T-cell count would be between 500 and 2000 cells/μL. HIV progression can be divided into 4 different progressive stages with regards to this parameter:

There are also several clinical stages:

AIDS (Acquired Immunodeficiency Syndrome) is the term used to describe the most advanced stage of HIV infection when the patient has become ‘immunodeficient’ (or fully immunocompromised). The patient is now susceptible to serious complications from previously harmless infections, opportunistic pathogens (organisms that are not usually pathogenic in those with normal immune systems) and malignancies. A few examples include: HHV8- a virus which is the cause of Kaposi’s sarcoma, a diagnostic infection for AIDS; Pneumocystis pneumonia, candidiasis, protozoal infections. Death is not caused by the HIV virus itself but through conditions like these. 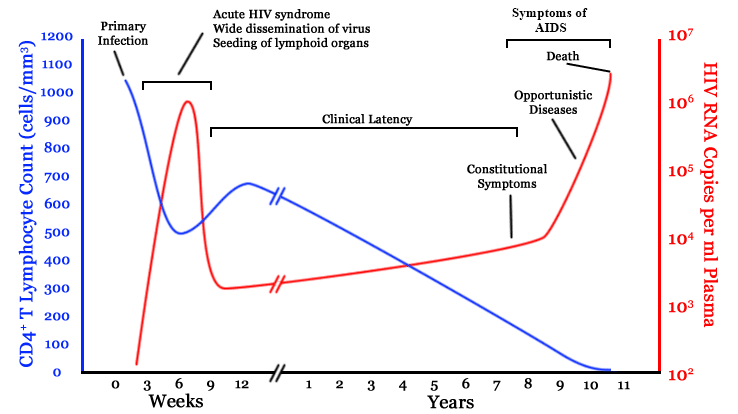 Figure: Shows the changes in CD4 lymphocyte count over time in a patient with HIV

Signs and symptoms of HIV 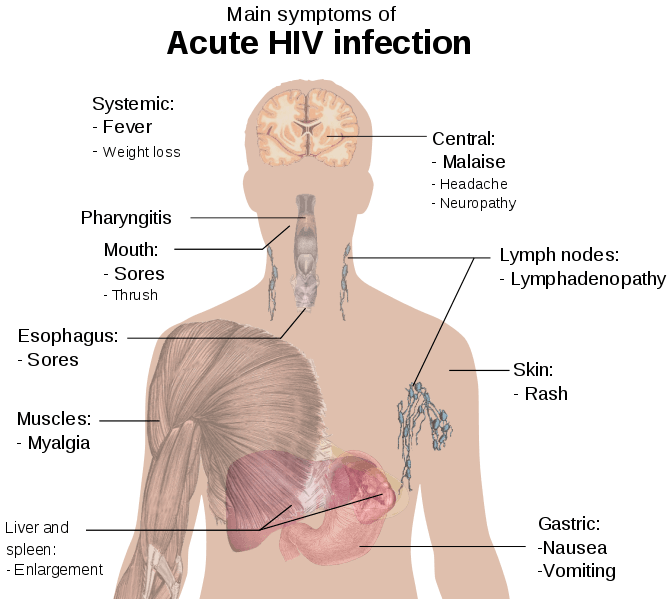 Figure: The main signs and symptoms of an Acute HIV infection 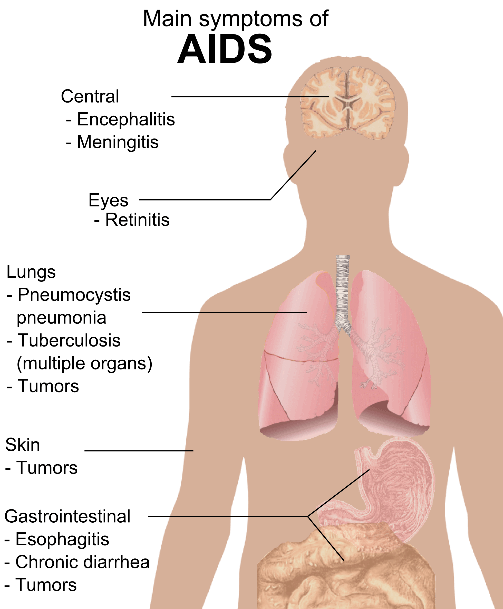 Figure: The main signs and symptoms of an AIDS infection

The Life Cycle of HIV and Drug Targets

There are 7 steps of the HIV life cycle (i.e. how it hijacks and replicates in CD4 T-cell). These are important to understand as they are used as targets for treatment: 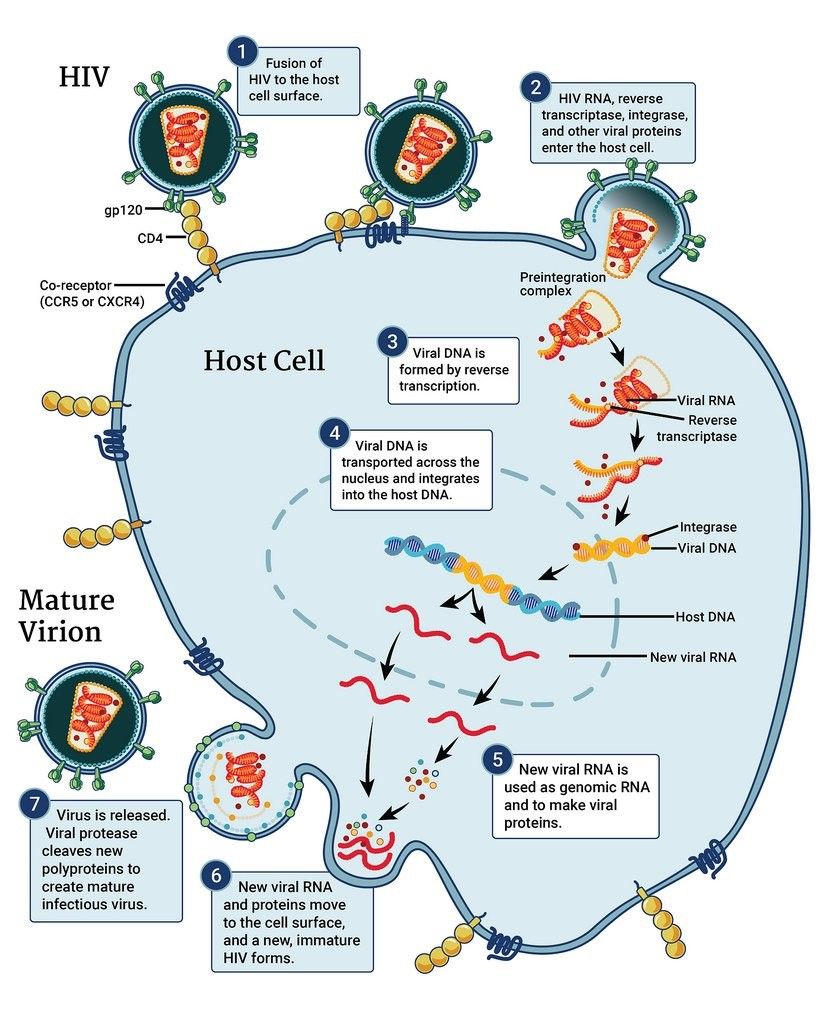 Figure: The Life Cycle of HIV

As you can imagine, a lot of these HIV-specific enzymes are potential drug targets and by targeting different stages of the HIV life cycle simultaneously, the efficacy of treatment overall, avoiding the threat of resistance. This is why current treatment involves what is called ‘combined’ therapy: patients are prescribed a combination of 3 anti-retrovirals (ARVs) - known as triple drug therapy or highly active antiretroviral therapy (HAART) (if you are particularly interested in this topic it is worth visiting this webpage):

Whatever the particular drug regimen someone is given, they will have to take the combination of medicines every day. It is important to point out that currently, treatment is not curative but will increase life expectancy (slowing or halting progression) and prevent the spread of HIV by reducing the risk of transmission.

As we have just seen (despite a unique success story), there is currently no cure for HIV. Although treatment is helpful in allowing patients to have a near normal life expectancy and quality of life, it is also very expensive and as a result only a small portion of patients are being treated worldwide. Thus, important efforts are being placed in prevention.

These are some of WHO’s recommendations to help limit the risk of HIV transmission through sex:

Being a blood borne virus, sexual contact is one mode of transmission - but not the only one. Any contact of infected bodily fluids with mucosal tissue, blood or broken skin can be a route of transmission. Therefore, apart from sexual contact (that accounts for 95% of infections), HIV can also be transmitted through medical procedures such as blood transfusions, contaminated needles (mainly through needle exchange among IV drug users), or perinatal transmission (vertical transmission).

Figure: Shows the risk of HIV transmission depending on the type of exposure

The earlier HIV is diagnosed, the better the prognosis as the higher CD4+ count can be maintained. Therefore anyone who suspects they might have become infected should attend their occupational health clinic or sexual health clinic for testing as soon as possible.

There are a few different tests that are used:

In some cases, some patients (let’s say a nurse who undergoes a needlestick injury) might opt in to have post-exposure prophylaxis treatment given immediately to increase the chances of preventing infection. This is only given in certain emergency situations that need to meet the guidelines and must be started within 72 hours after the possible exposure to HIV.

Because of the infectious nature of HIV, there are some ethical dilemmas healthcare professionals might face. Ideally, testing should be done with consent from the patient who should be then trusted to disclose their status with their partner(s) or anyone they might put at risk of infection. However, in some situations, we might be asked for example, as GPs, not to tell a patients’ partner. The ethical dilemma here rests on patient confidentiality vs harm to the general public. It would be best advised in this case to make sure to talk the patient through the importance of the disclosure of such information as and explain the dilemma weighing patient confidentiality against other people’s safety (i.e. the health of a mother, an unborn child, a sexual partner etc.).

Another important aspect of HIV is the stigma that still can be associated with the condition. When making a diagnosis of HIV, healthcare professionals must be aware of the impact this might have on their patients and provide them with the right support, medically but also psychologically.