Evidence based practice occurs when evidence from systematic research is used as a basis for healthcare decisions to improve the quality of care given. It is commonly done through systematic reviews (overview of primary studies done using high quality methods) and meta-analysis (synthesis of the results of two or more primary studies that addressed the same hypothesis in the same way). Forest plots are the diagrammatic representation of meta-analysis, with the diamond demonstrating the pooled estimate and pooled confidence interval.

Publication bias is an issue with meta-analysis, because the selection of studies to include is biased against smaller studies that show no effector have ‘unfavourable’ results. This is tested by using a funnel plot.

Evidence based practice involves the integration of individual clinical expertise (from the healthcare worker in question) with the best available external evidence from systematic research. Evidence based practice attempts to reduce the number of healthcare workers continuing to use ineffective practices or failing to take on practices that have been proved to be effective.

There are two main types of evidence:

Problems getting evidence into practice

Systematic reviews are a type of literature review that collects together and analyses multiple studies around the same topic. They attempt to provide a complete summary of the current research. Systematic reviews may use meta – analyses as part of their reasoning.

They exist to: avoid or reduce bias, highlight gaps in research, address clinical uncertainty (if studies on the same topic come to different conclusions), and to assess the quality of studies and their results.

They are useful to clinicians because: they have less bias than individual studies, reduce the delay between research and implementation (because all the research is collated), save clinicians from having to investigate the research themselves, and to increase quality control and certainty.

Meta-analyses are a collation of similar studies that have been collected to form one conclusion. They facilitate the collection of a large amount of study data and reduce problems of small sample size. They also allow the researchers to quantify the size of an effect and the confidence intervals surrounding this value as a pooled estimate. Basically, doing a meta-analysis means that the researchers look at all the data on one topic, work out the average result, work out the degree of uncertainty on this (confidence interval) and then can release it to the public.

Meta-analysis also have formal protocols specifying many things before they start:

Forest plots are the diagrammatic form of a meta-analysis. 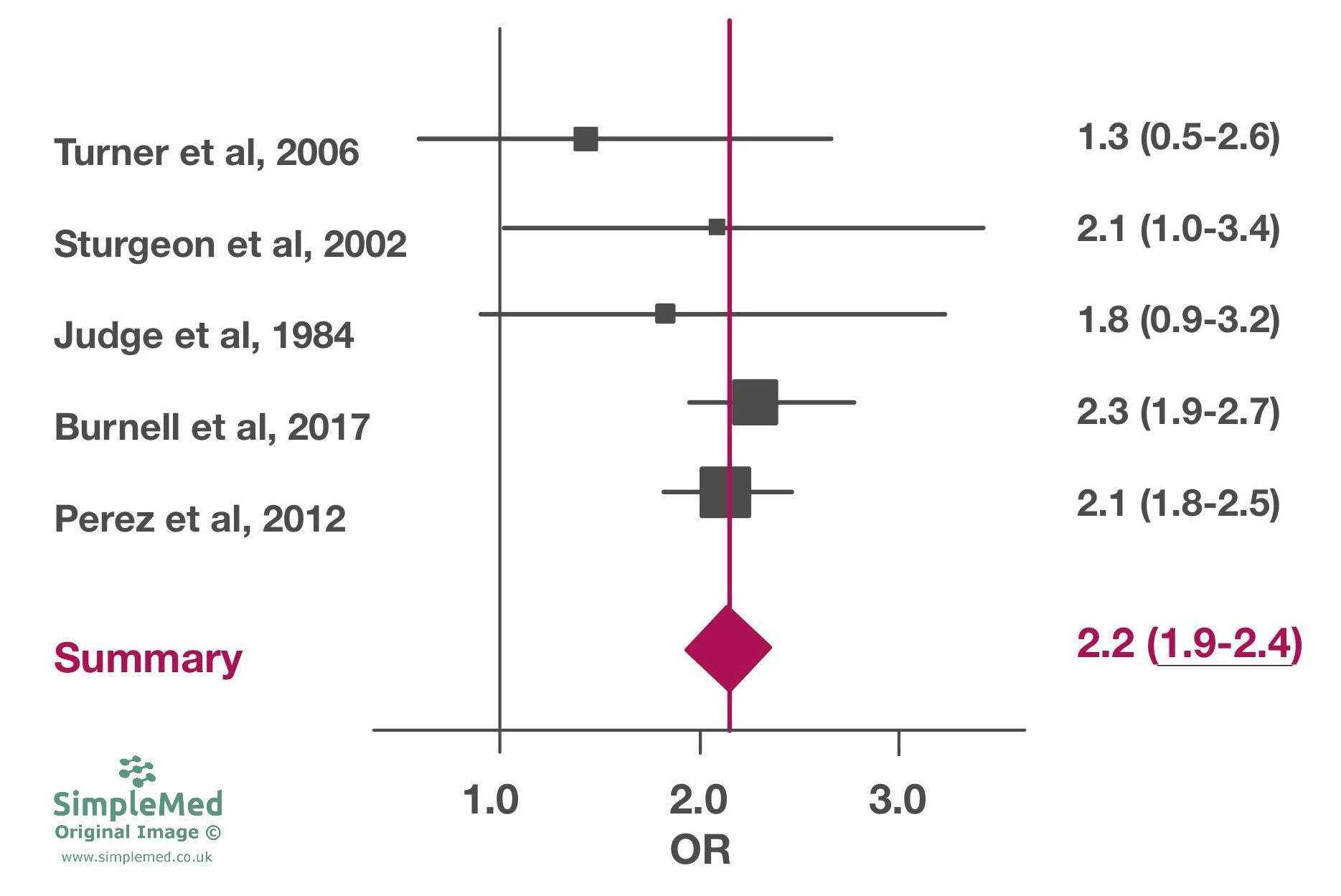 Diagram of a Forest Plot. All values and studies and fictional.

Variation is assessed through two methods: the fixed effect model and the random effect model.

Random effect model – assumes that the studies are estimating similar (but not the same) ‘true effect’ values. As a result the ‘true value’ is the mean of these values. More widely accepted model. 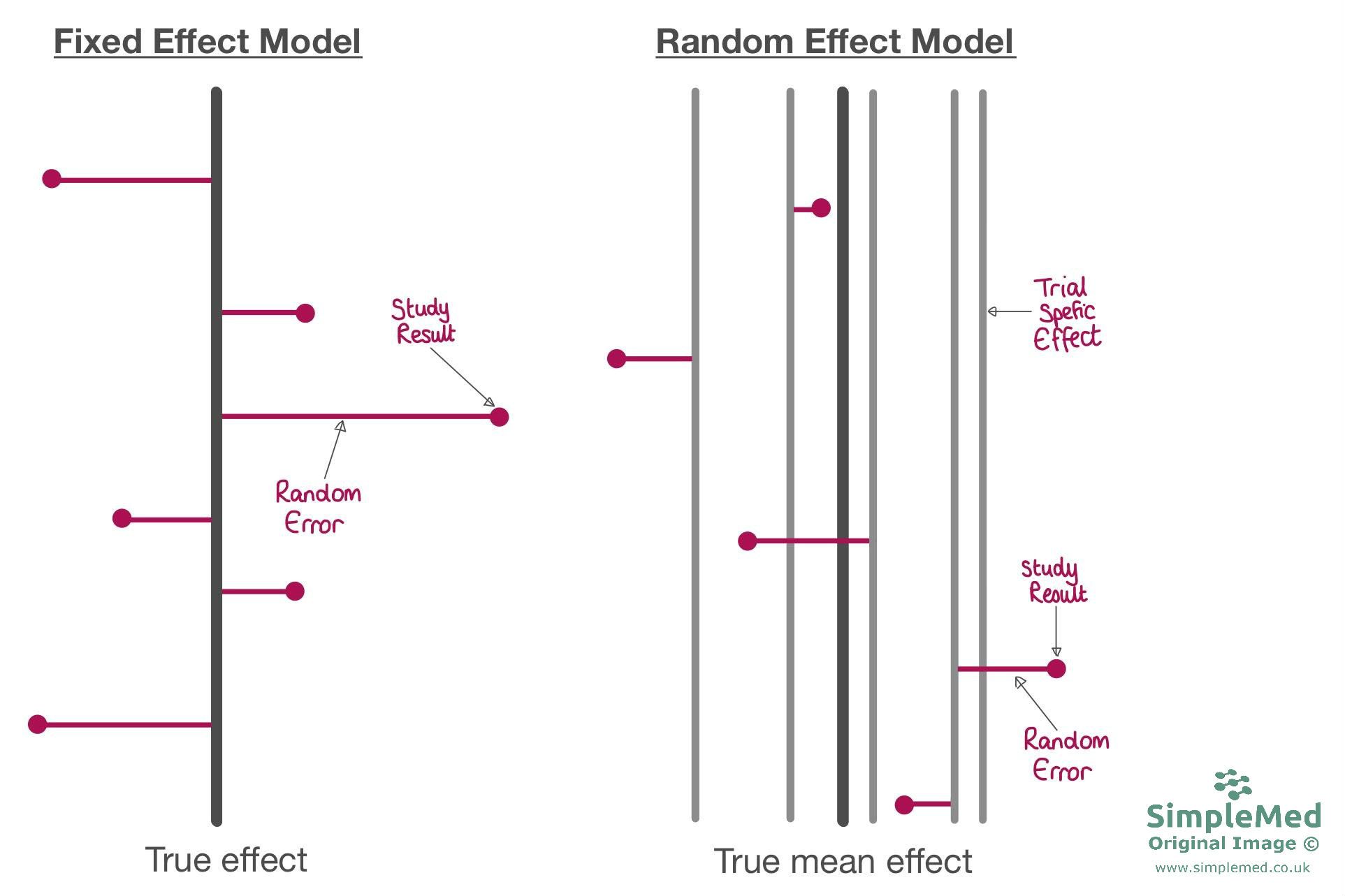 Random effects modelling accounts for variation but cannot explain it. Sub-group analysis (separating the group of participants into two groups to look if that characteristic has an effect) is used to help explain the heterogenicity, which can be useful in explaining the effects of a certain intervention or exposure.

There are two main types:

Variable quality can be due to:

Some studies are more prone to bias than others:

There are two possible approaches to combatting these:

There are many things to look at when assessing the quality of randomised control trials:

More than one assessor should be used when looking at the quality of studies, and they should be blinded to the results of the study, but this can be difficult as the assessors often have seen the study results before they begin.

Studies with statistically significant results or ‘favourable’ results are more likely to be published than those without, and this occurs especially with smaller studies. This means that any systematic review or meta-analysis can be flawed by this bias as some data is simply not available.

This can be combated through using a funnel plot and through checking the meta-analysis protocol for choosing the studies to include (they should check for unpublished studies on the same topic). The plot is funnel shaped as studies with larger sample sizes have smaller observed effects.

Diagram showing two funnel plots, the left side being unbiased, and the right being biased. If a funnel plot is symmetrical (it has no areas within the funnel shape that have no studies in, or all the funnel is filled easily with studies) there is no evidence of publication bias. If a funnel plot has gaps in the funnel shape (as shown by the blue circle), it shows that some studies have not been published because they show an ‘unfavourable’  and are smaller studies, therefore there is publication bias.