Next Lesson - Introduction to Neoplasia

In response to physiological and pathological stimuli, cells can undergo changes which make them more suited for their environment. Chemical mediators are able to signal cells to undertake a number of actions. These chemicals can prompt apoptosis, cell division and cell differentiation, or resist apoptosis.

Hypertrophy is the increase in the size of a tissue via the enlargement of cells. The intracellular organelles, cytoplasm and structural proteins all increase in these enlarged cells, but the number of cells in the tissue remains the same.

Hypertrophy can occur both physiologically and pathologically. A common cause of physiological hypertrophy is increased skeletal muscle mass gained through anabolic metabolism following exercise. Smooth muscle hypertrophy occurs in the uterus, stimulated by hormonal changes.

In hypertension there is often pathological hypertrophy of the cardiac tissue, due to the increased strain on the ventricles and atria of the heart. Too much cardiac hypertrophy can result in the muscular walls of the heart being too thick to effectively pump blood through the body causing heart failure.

Physiological hyperplasia occurs in the endometrium of the uterus upon stimulation of oestrogen during the menstrual cycle. Hyperplasia is also the method by which the liver restores itself from a partial resection.

Pathological hyperplasia can occur in overstimulation of endometrial tissue with oestrogen, for example in women taking unopposed oestrogen (without progesterone) for hormone replacement therapy after the menopause. The increased cell replication increases the chance of dysplasia (discussed later), and then neoplasia, taking place. 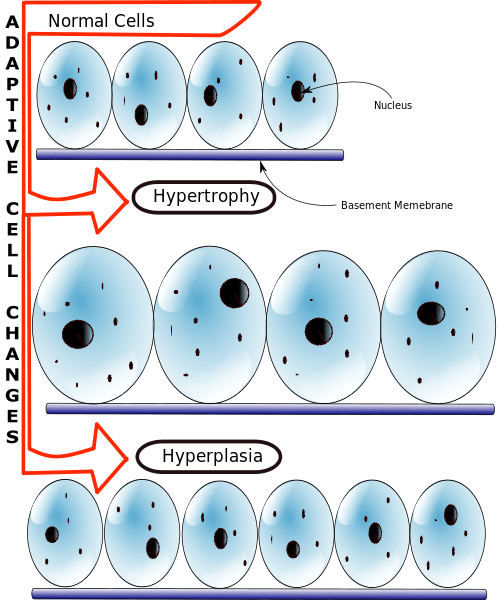 Diagram - The differences between hyperplasia and hypertrophy

Atrophy is the opposite of hyperplasia and hypertrophy, in essence, it is the shrinkage of tissue. This can happen by a decrease in cell number and/or cell size.

Atrophy occurs physiologically in involution - when a tissue reduce in size after having increased in size. For example, the uterus and breasts both reduce in size post-pregnancy. Atrophy will also occur with old age. When an individual gets older, most systems and tissues undergo some level of atrophy.

Pathological atrophy can happen through catabolic metabolism due to malnutrition, whether this be caused by diseases such as cancer or by nutritional deficit. It can also occur due to inactivity, pressure, ischaemia, and chronic inflammation. 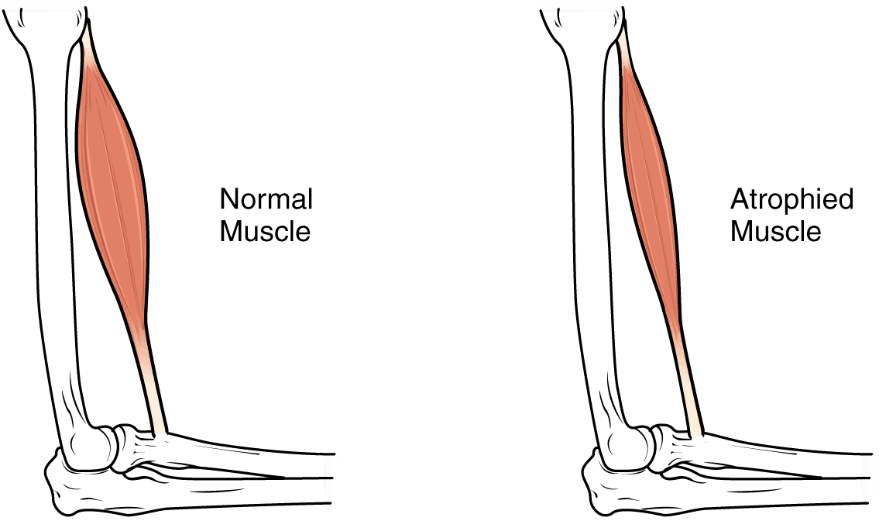 Diagram - The difference between normal and atrophied muscle

Pathological metaplasia is a common response to chronic stimulation from chemical or physical factors. Metaplastic cells are often considered to be precancerous, as they can progress to form malignant cells, however, there is also the chance that the cells will regress to their original type if the stimulus is removed.

Some common examples of pathological metaplasia are:

Dysplasia is disordered growth of epithelium characterized by frequent mitotic figures and loss of cell orientation and uniformity (size, shape). It can progress to become malignant (known as carcinoma in situ). The key difference between dysplasia and neoplasia (cell change that is cancerous) is that dysplasia is reversible if the stimulus is removed, while neoplasia is not.

Infection with the human papillomavirus (HPV) can cause dysplasia of the cervix in the transformation zone. Both HPV and dysplasia can be tested for during smear tests as the dysplasia can progress to cause cervical cancer. 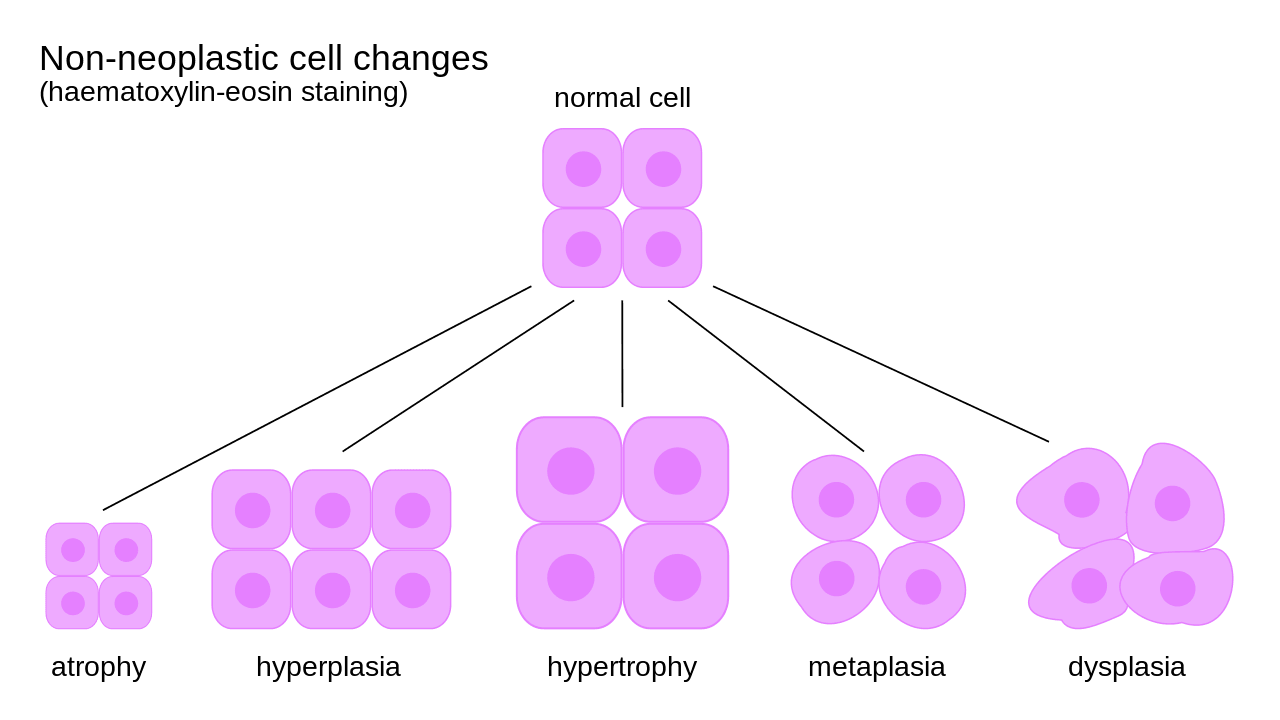 Anaplasia is the progression of dysplasia to the point where the cells have mutated so much, they are no longer morphologically distinct from other differentiated cells types. This is a malignant transformation following mutation of healthy differentiated cells. For more information in the cellular changes associated with malignancy see the Introduction to Neoplasia article.

This is a rapid increase in the number of cells in a tissue due to replication. There are several tissue types that have different rates of proliferation: