Next Lesson - All done here! Check out our other subjects.

What is the Autonomic Nervous System?

The autonomic nervous system (ANS) is the division of the body’s nervous system which controls all involuntary functions – e.g. heart rate, blood pressure, digestion, pupil diameter. It is separate from the somatic motor system, which deals with voluntary actions (i.e. skeletal muscle contraction).

The autonomic system is entirely efferent. However, it is regulated by afferent inputs via the hypothalamus.

Organisation of the Autonomic Nervous System

The division of the ANS into the sympathetic and parasympathetic systems is purely anatomical:

Remember the nervous system is bilaterally symmetrical, so when considering one side it is important to appreciate that the same is happening on the other side. 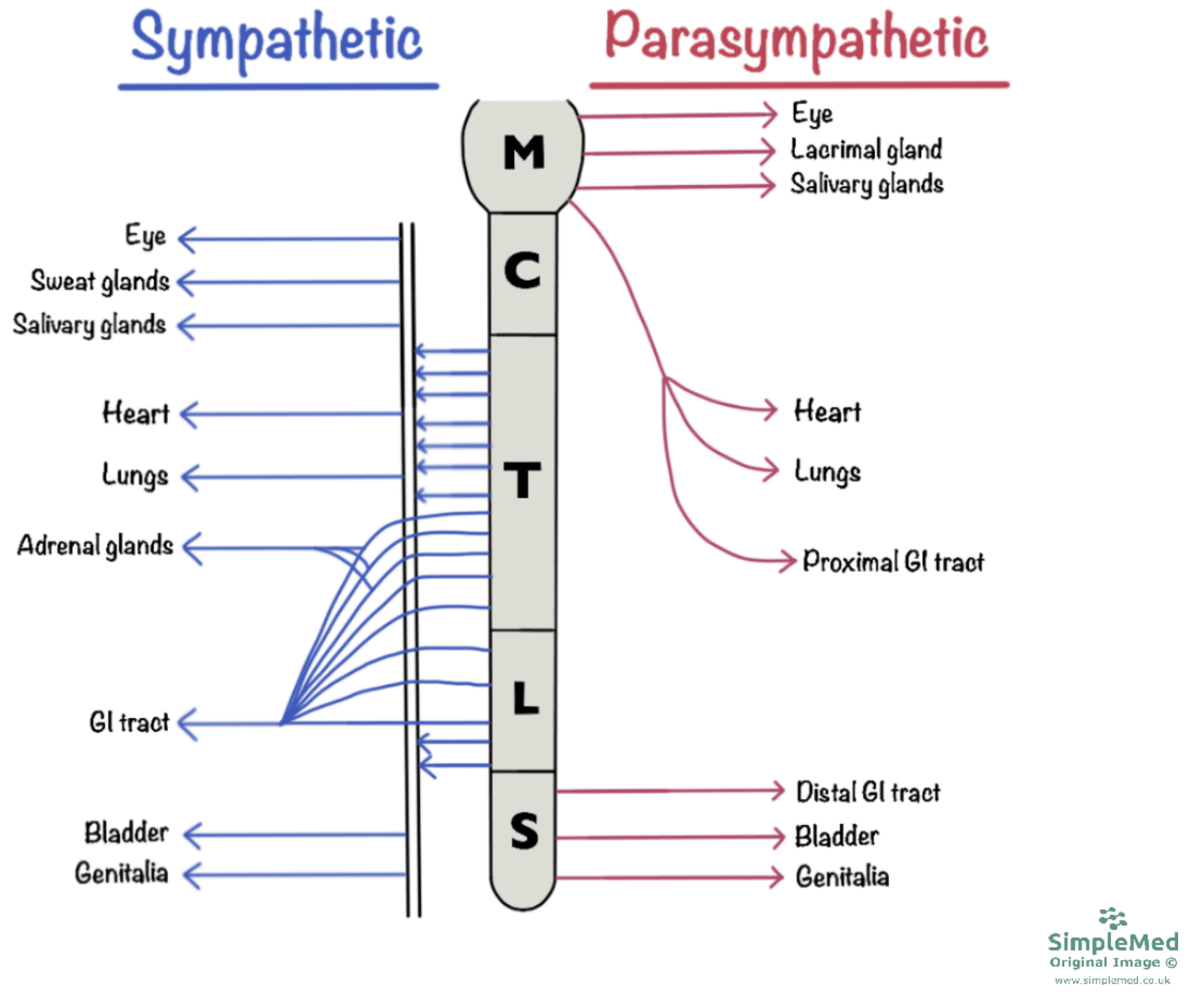 Diagram - The basic anatomy of the autonomic nervous system

In the sympathetic nervous system:

In the parasympathetic nervous system:

Actions of the Autonomic Nervous System

As covered in previous articles, neurones communicate with other cells at synapses, where they release a neurotransmitter which activates receptors on the post-synaptic membrane.

For post-ganglionic neurones, the use of neurotransmitter differs between sympathetic and parasympathetic divisions:

Adrenoceptors and muscarinic receptors are examples of G-protein coupled receptors (GPCRs). For more information, check out our article on G-Protein Coupled Receptors.

Stimulation of the sympathetic nervous system can result in: 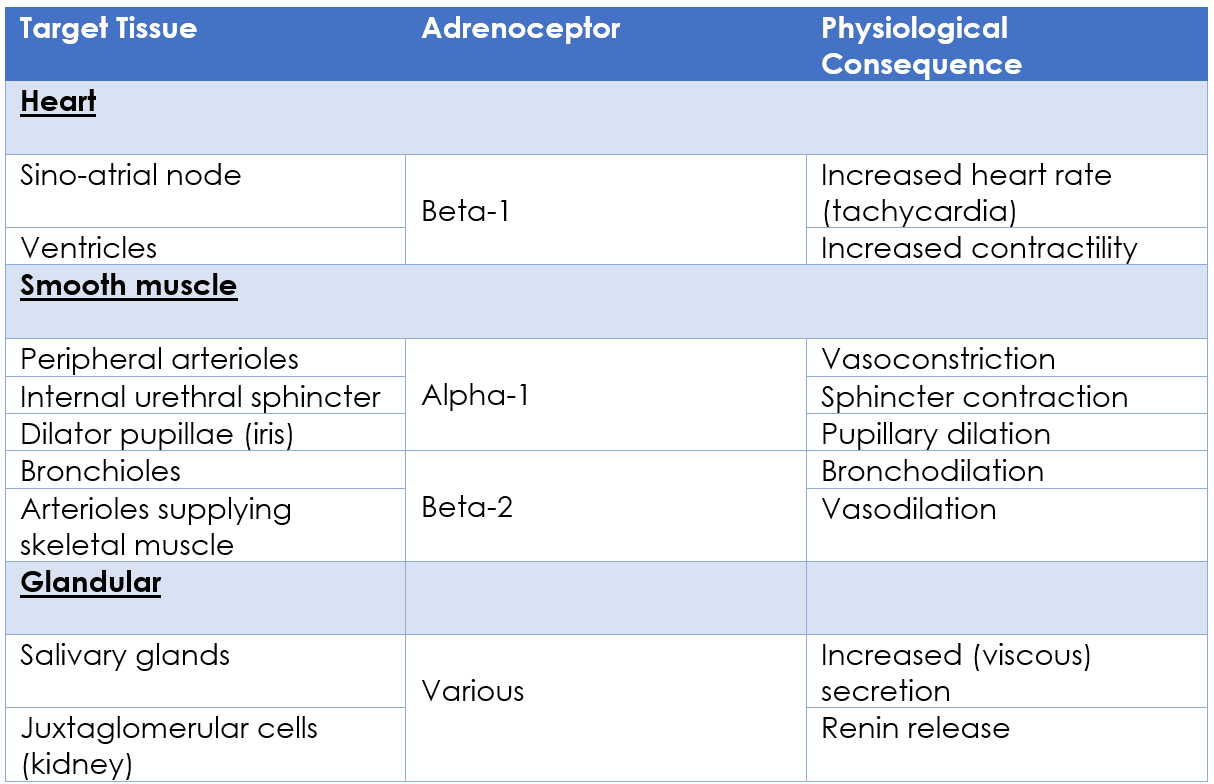 Table - The physiological actions of the sympathetic nervous system

Stimulation of the parasympathetic nervous system can result in: 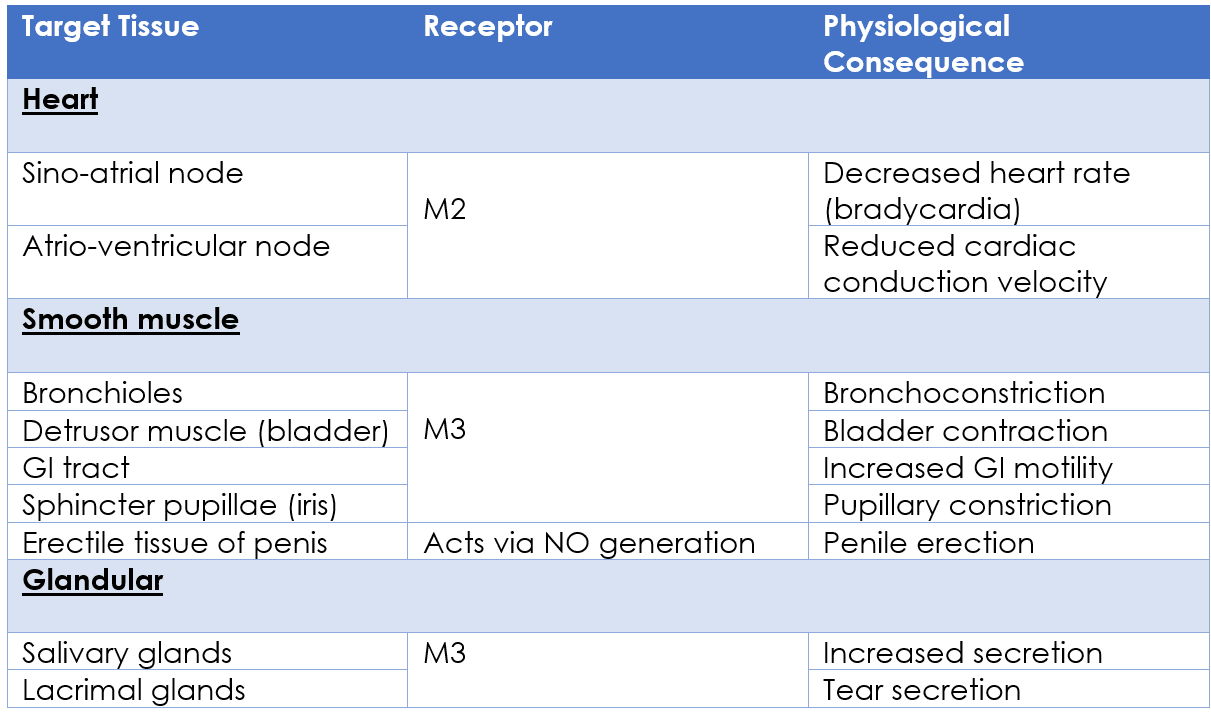 Table - The physiological actions of the parasympathetic nervous system

Role of Adrenaline in the Sympathetic Nervous System

As well as its neural component, the ‘fight or flight’ response also has an endocrine component: adrenaline.

Adrenaline is a tyrosine-derived hormone which is secreted into the bloodstream by chromaffin cells, located within the medulla of the adrenal glands. Chromaffin cells are essentially modified sympathetic post-ganglionic neurones which secrete adrenaline instead of noradrenaline.

Adrenaline acts on adrenoceptors in the same way that noradrenaline does, however because adrenaline is released into the bloodstream, it has a much more systemic effect (the ‘fight or flight’ response).

For more information, check out our Endocrinology article on Adrenal Glands and Adrenal Disorders.

Drugs targeting the autonomic nervous system are often used to bring about a therapeutic effect. These drugs exert their effects by interacting with post-synaptic receptors or by interfering with neurotransmitter metabolism.

Overstimulation of muscarinic acetylcholine receptors can lead to parasympathetic overload, otherwise known as SLUDGE syndrome. This is a medical emergency comprising of the following symptoms:

Causes of SLUDGE syndrome include drug overdose (e.g. pyridostigmine), ingestion of ‘magic mushrooms’, exposure to organophosphorus insecticides or inhalation of nerve gas. It is treated with intravenous antimuscarinics, such as atropine.