Hypertension is a sustained increase in blood pressure, defined as a BP of >140/90 mmHg.

In the UK, hypertension is the second biggest risk factor for premature death (with smoking being the first). Over a quarter of adults in the UK have hypertension, and the prevalence greatly increases with age.

The degree of hypertension can be split into three stage.

The blood pressure of a patient at a clinic may be higher than normal due to the White Coat Effect. This is thought to be caused by patients becoming nervous or anxious around doctors, causing their blood pressure to rise.

The treatment of hypertension can be found in the article on CVS drugs.

Short term regulation of blood pressure is via baroreceptors which are found in the carotid sinus and the aortic arch. They respond to short changes in BP and act to quickly change the BP back to normal. They do this by:

Long term regulation of BP is via a number of mechanisms which relate to the sodium concentration within the blood. Generally speaking, water follows sodium when it is transported e.g. when sodium is reabsorbed in the kidney, water passively follows it. Therefore by changing the sodium concentration, the volume of fluid in the blood changes. Simply put - as the concentration of plasma sodium increases, the circulating volume increases. The mechanisms responsible for this balance are:

Renin is released from granular cells of the juxtaglomerular apparatus (JGA) which are found next to the glomerulus. Renin is key in the RAAS due to its action on angiotensinogen. Renin release is stimulated by:

ACE also breaks down bradykinin, so when ACE inhibitors are used to treat heart conditions like hypertension, they prevent the breakdown of bradykinin. This can cause a dry cough. 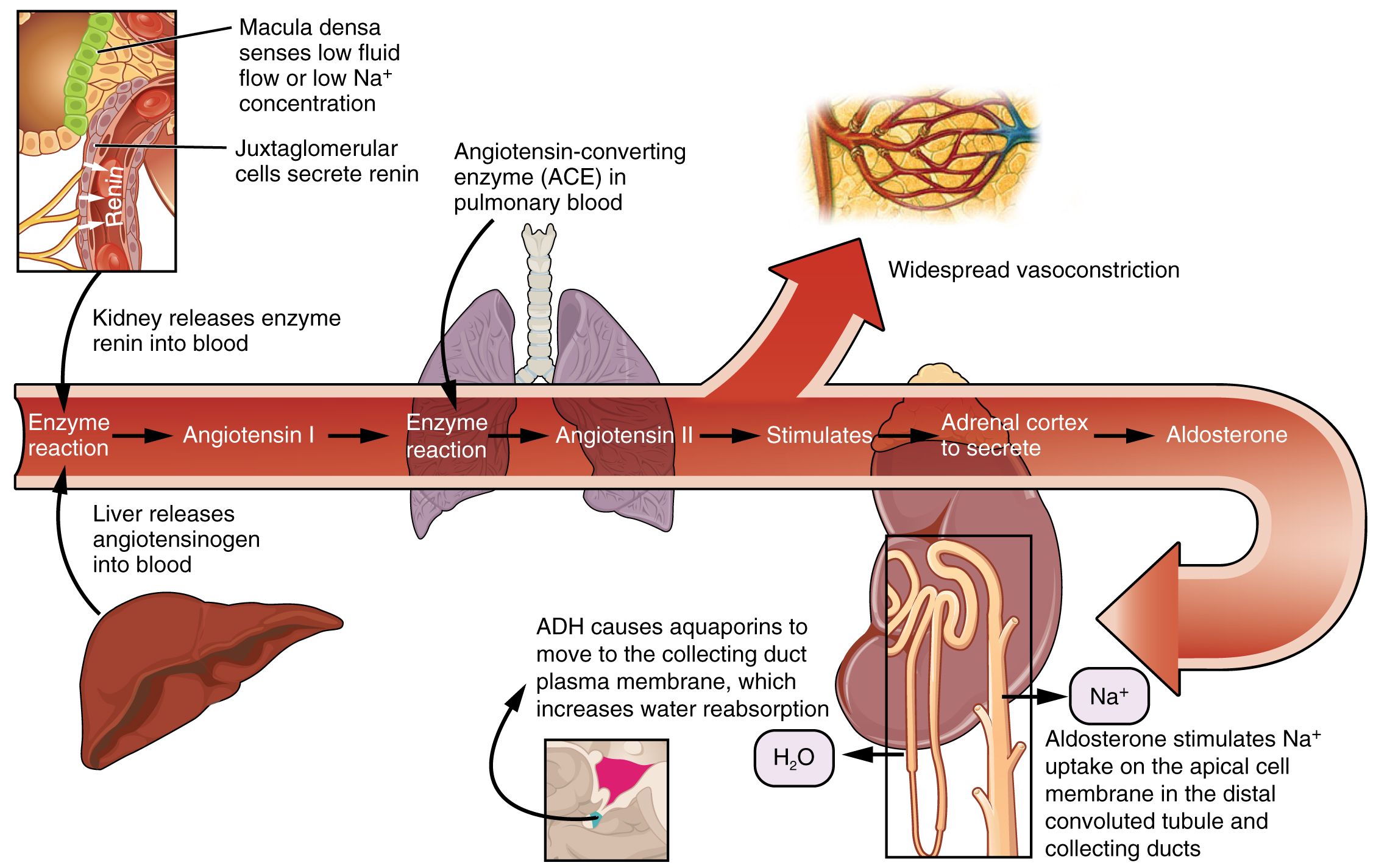 The sympathetic nervous system is stimulated by a decrease in BP and by the RAAS directly.

Antidiuretic hormone is released from the posterior pituitary in response to increased plasma osmolality and hypovolaemia.

Atrial natriuretic peptide (ANP) is synthesised and stored in atrial myocytes which detect stretch in the atria. ANP is released in response to stretch. Reduced filling of the heart caused by a low BP/volume leads to decreased stretching of the heart and this inhibits the release of ANP.

ANP causes increased excretion of sodium and water to lower the BP by:

Prostaglandins cause vasodilation which enhances glomerular filtration and by reduces sodium reabsorption. Prostaglandins act as a buffer to excessive vasoconstriction caused by the SNS or RAAS.

Dopamine acts to buffer against excessive sodium reabsorption. Dopamine is formed in the kidney from L-DOPA. Receptors are found on renal blood vessels and cells of the proximal convoluted tubule (PCT) and the thick ascending limb (TAL) of the Loop of Henle.