Next Lesson - Infections of the Reproductive Tract

The post-partum period is defined as the period six weeks after the delivery of the placenta (not the fetus). For most mothers, if they deliver the placenta quickly after birth, this is the period from birth until their baby is 6 weeks old.

During this time, the body tries to return to the pre-pregnancy state, and there are many physiological and psychological changes that are made, making this time difficult for many new mums.

So many different things can happen in this time, as the mum and those around her get used to having a new baby, and as the mum heals from the birth. There are also lots of hormonal changes occurring in the body of the mother, which can cause anything from elation and protectiveness, to anxiety and feeling overwhelmed. It is therefore important that healthcare professionals look after a new mum’s mental health as well as her physical health as she recovers from birth and adapts to the changes that have occurred.

Post-partum haemorrhage (PPH) is defined as the loss of more than 500ml of blood and occurs in between 5-10% of births (according to the World Health Organisation). There are two main types:

Occurs within 24 hours of birth, and is related to the 4 ‘T’s of Primary PPH:

Occurs any time from 24 hours to six weeks, most commonly at weeks 2-3.

The most common causes for secondary haemorrhages are:

The perineum is the area between the opening of the vagina and the anus. During vaginal delivery this area is stretched to allow for birth, which can lead to bruising or tearing of the perineum. In some cases, a cut is made through the perineum called an episiotomy to help control the direction and depth of the damage.

There are many possible causes of maternal collapse in the period following birth:

All of these forms of collapse can lead to cardiac arrest in the mother.

During birth, there is a number of opportunity for pathogens to enter the bloodstream due to the often traumatic nature of labour which causes lots of breaks in the skin (vaginal tears/episiotomies, Caesarean sections, placental tissue). Pregnancy is also a state of immunocompromise, which coupled with the trauma of birth, can leave mothers vulnerable to infections.

Common sources of sepsis in the post-partum period are the genital tract, the urinary tract (e.g. a complication of a UTI), or through mastitis (an infection of breast tissue).

Lactation is another key feature of the post-partum period. It is the process through which the mother produces milk from her breast with which the baby can be fed. 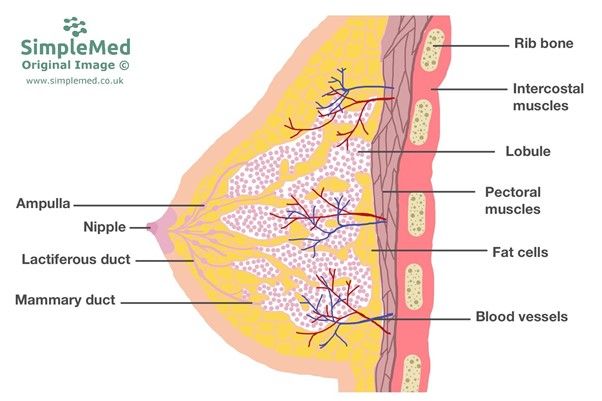 Diagram - Internal structure of the breast

The breast is made up of a series of secretory lobules which empty into ductules. These ductules then converge to form the mammary ducts. The ampulla acts as a temporary store of milk until the lactiferous duct secretes the milk out through the nipple.

Hormones that affect the breast can be categorised by their function:

Prolactin is a hormone that is essential for milk production. Suckling (the baby trying to feed on the nipple) is a very powerful stimulus for the production of prolactin.

Oxytocin is produced in the hypothalamus and released from the posterior pituitary. Oxytocin has a key role in birth, but also has functions in the breast. Oxytocin causes the basketwork of myoepithelial cells surrounding lactiferous ducts to contract, causing milk let down.

There are circumstances in which breastfeeding is not possible or where the mother chooses not to breastfeed. It is important to remember that ‘fed is best’ when considering the different options, and that it is the mother’s choice whether to breastfeed or not.

It is therefore important that healthcare professionals explain the advantages of breastfeeding to the mother, but to respect any choice that she makes.

Mastitis is inflammation of the breast tissue. It is usually caused by infection either entering through a skin break or due to stasis of milk in the breast. The woman should continue breastfeeding from the affected breast to relieve pressure. It is also recommended that warm compresses may help ease discomfort.

In the UK, current guidelines suggest that antibiotics are only indicated if the infection is not recovering after 24 hours of milk drainage from the breast, or if the mother becomes systemically unwell (with for example a fever).

‘Baby blues’ refers to a mild depression of mood following birth that stems from the hormonal changes that are occurring in the body as it returns to the non-pregnant state.

Symptoms can include feeling tearful, irritable, low mood and anxiety. It is usually self limiting and should only last a maximum of 14 days, and should managed by reassuring and supporting the mother. Most mothers will experience some elements of the ‘baby blues’.

Post-partum (or postnatal) depression usually occurs within 4 weeks of delivery and can persist for many months. It is characterised with the same symptoms as depression, including low mood and low motivation. It is treated similarly to depression, with self help, psychotherapy and medications such as antidepressants.

Risk of occurrence is higher in those woman with previous mental health issues. As so many women suffer from this condition it is key to ask about when talking to new mothers.

An extremely rare syndrome of anxiety, paranoia, mania and delusions that develops within four weeks of birth. It is a psychiatric emergency, and mothers exhibiting the symptoms should be assessed by a medical professional as soon as possible. The condition is an emergency because patients with this condition have a high rate of maternal suicide and/or infanticide.

Post traumatic stress disorder (PTSD) occurs in about 1.5% of women following childbirth. It is usually associated with more challenging deliveries, traumatic births or a long and painful labour.

It is important to remember that childbirth is a challenging time for many mothers, and that the adaptations to life as a new mum alongside biological changes to the body can be very difficult. Support and reassurance often are very helpful, as is input from a healthcare professional.

There is no right or wrong time to begin having sex again after childbirth; it is a decision to be made as a couple when both parties feel ready again.

As already mentioned in this article, breastfeeding can inhibit ovulation for a number of months through inhibition of GnRH release, which disrupts the ovulatory cycle.

As a result some women use this effect as a form of natural contraception known as the lactational amenorrhoea method. If used correctly the risk of pregnancy is 2% (source). However, to be effective this method needs the baby to be almost completely breastfed. This means that additional contraceptives are usually advised, as a mother can become pregnant again before her first period (as ovulation occurs around 14 days before menstruation).

The introduction of contraception in the post-partum period can sometimes be a difficult topic to approach, but there are many benefits to preventing unwanted pregnancies in this period (source):

There are a number of options for contraceptives after birth, but it is important to understand the time limits on them. For example, because pregnancy is considered a pro-thrombotic state, the combined oral contraceptive pill is contraindicated until 3 weeks postpartum in women with no other risk factors for venous thromboembolism, or until 6 weeks postpartum in women who do have another risk factor (e.g. smoking, family history). In contrast to this, male and female condoms have no contraindications surrounding birth, so can be used as soon as both parties feel ready to engage in intercourse.