Next Lesson - The Glomerulus

A nephron is the microscopic functional unit of a kidney – a single kidney can contain between 800,000 and 1.5 million nephrons on average!

There are two types of nephrons: cortical and medullary, named based on where in the kidney they are found. Both types of nephrons function very similarly, with small differences which will be discussed later.

This article aims to give an overview of the structure of the nephron – for more information on relevant ion and water transporters please see the article Control of Plasma Volume.

The nephron can be split up based on different cell types and their functions.

For more information on the structure of these nephrons and their individual blood supplies, please see our article on the Anatomy of the Urinary System. 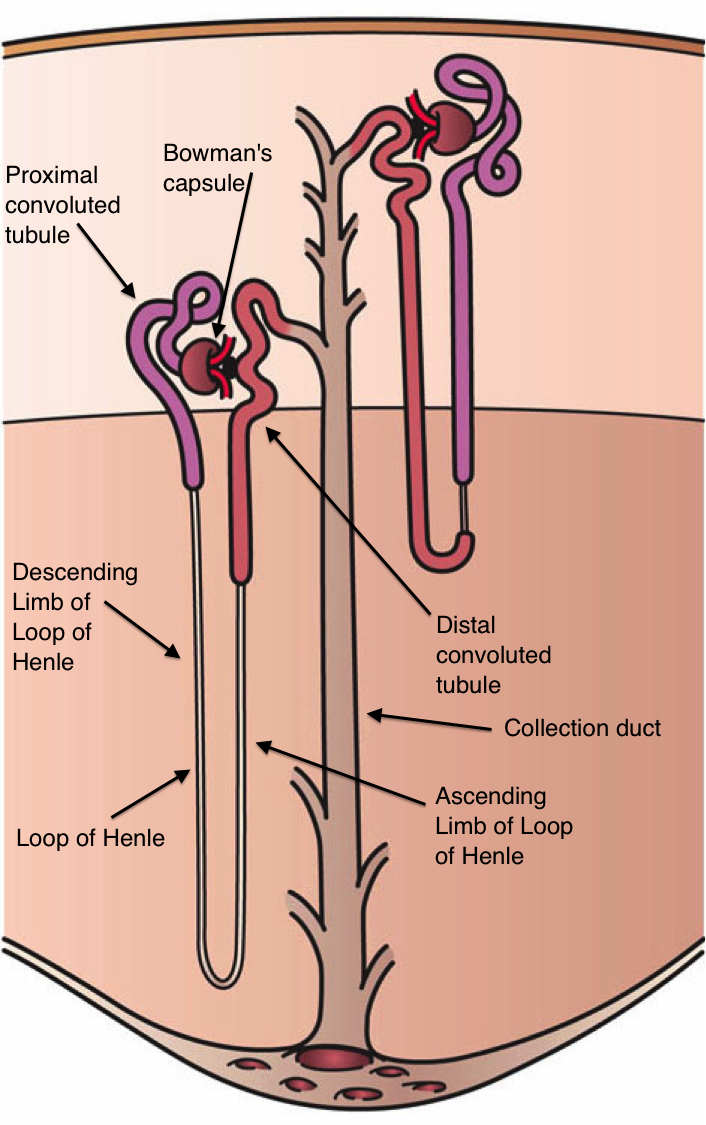 The glomerulus is a term that refers to the capillaries that exist between the afferent and efferent arterioles, and which are enclosed by the Bowman’s Capsule.

Blood flows through the glomerulus and is filtered – solutes and move into the Bowman’s capsule, flowing into the proximal convoluted tubule (PCT). Blood cells and proteins are not normally filtered, remaining behind in the vessels. The solution inside the PCT is referred to as the ultra-filtrate and different components of the ultra-filtrate are reabsorbed at different points of the nephron.

The PCT is responsible for reabsorbing many solutes including; sodium, chloride, potassium, bicarbonate, urea, amino acids, glucose, and water. 100% of filtered amino acids and glucose are reabsorbed at the PCT.

The PCT is split into three segments, S1, S2, and S3 – based on the transporters which are expressed on the cell membranes.

The DCT is responsible for reabsorbing sodium, chloride, potassium, calcium, magnesium, and bicarbonate. It is split into the early DCT (DCT1) and the late DCT (DCT2) – again based on the types of transporters expressed on the cell membranes.

The DCT is responsible for helping to maintain serum pH through the reabsorption of bicarbonate.

Thiazide and Amiloride diuretics act on transporters which are present in the DCT.

The CD is the last part of the nephron. It extends down into the renal medulla and eventually joins with other collecting ducts to form the renal calyces. They are responsible for the extraction of sodium, chloride, urea, and water from the ultrafiltrate.

The CD can be split into cortical and medullary segments based on their location. In the cortical CD there are two main cell types: principle cells which primarily reabsorb sodium, and intercalated cells which actively reabsorb chloride.

The reabsorption of water in the CDs can change in response to plasma osmolarity and is under the influence of anti-diuretic hormone (ADH). The presence of ADH stimulates the insertion of aquaporin channels into the apical membrane of collecting duct cells – these channels allow water to pass through the membrane. This means that anti-diuretic hormone (as indicated by the name) encourages water reabsorption and therefore reduces the amount of urine produced.

The ultra-filtrate left after passing through the CD becomes urine. Around 85% of filtered water has been reabsorbed at this point, so all that remains is a small amount of water, ions, metabolites, and nitrogenous waste.