Vitamin B12 and Folate

Vitamin B12 and Folate are two important molecules which are used in the synthesis of DNA. They are both found in the diet and have complex methods of absorption into the body. When these molecules are deficient, megaloblastic anaemia and neurological conditions can occur.

Vitamin B12, also known as cobalamin, is a nutrient required for DNA synthesis. It is essential for the formation of reticulocytes and can only be obtained through a diet of animal origin food, i.e. meat, fish eggs and cheese. Due to this, vegan diets are prone to deficiencies in B12, therefore vegans are required to take supplements or fortified foods to maintain the normal levels. Fortunately, there are reserves available in the liver that are able to sustain the body for 3 to 5 years, this means that the symptoms of the deficiency won’t present for a long time. Meat eaters have a very large excess in their diet. 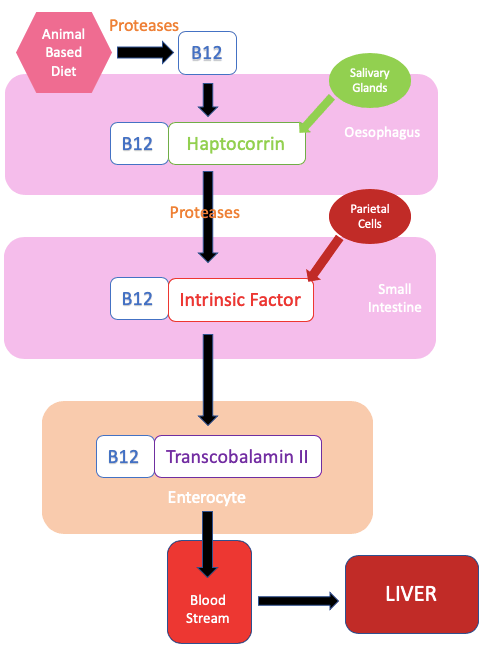 Diagram: The absorption pathway of vitamin B12

Proteases in the saliva release B12 from protein in meat. To be absorbed, free B12 must bind to haptocorrin (also known as transcobalamin-I), a protein secreted from the salivary glands. This B12-haptocorrin complex passes through the bowel to the small intestine where proteases digest and uncouple it. Following this, the B12 then forms a new complex with a glycoprotein called intrinsic factor, which is secreted from parietal cells in the stomach. This B12-intrinsic factor complex is very important as it binds to receptors in the ileum and then can be internalised by enterocytes. Once inside and released from the intrinsic factor, a new complex with transcobalamin II is formed. This is then released into the bloodstream where it reaches target tissues with the corresponding transporters, notably the liver.

One of the two key reactions which B12 is required for is the methyl group transfer from tetrahydrofolate (see below) to homocysteine. This reaction forms methionine, a component in the synthesis of the DNA base thymidine.

B12 can become deficient in a number of ways:

Vitamin B12 deficiency is associated with neurological disease and can cause a serious condition called subacute combined degeneration of the cord. This can cause irreversible nervous damage and presents with progressive weakness and numbness in the extremities progressing inwards.

Tetrahydrofolate (Vitamin B9) is required for DNA synthesis. Unlike B12, it is found in both animal-based foods and vegetables, particularly green leafy vegetables. The body has stores which can sustain the body for approximately 3 months, so a good dietary supply is key. Absorption of folate occurs within the duodenum and jejunum, where it is converted to its functional form of tetrahydrofolate (FH4) which is taken up by the liver.

Folate levels can become deficient in a number of ways:

Note that a folate deficiency in pregnancy can also cause neural tube defects in the unborn fetus.

You should always check vitamin B12 levels alongside any patient with a folate deficiency. This is because any replacement treatment given can mask the B12 deficiency.

Tetrahydrofolate is a key molecule in metabolism as it is a one-carbon carrier, binding with a carbon molecule to form methyltetrahydrofolate. A collection of methylTHF molecules are known as a one carbon pool. When carbons are attached they can be used in lots of reactions, the most important of which is thymidine synthesis. Thymidine is one of the 4 bases which are used in forming DNA so the reaction is vital.

B12 and folate work together as B12 removes the methyl group off methylTHF to form tetrahydrofolate. Without this thymidine cannot be synthesised. This is why a lack of vitamin B12 leads to a “functional” folate deficiency. This is known as the folate trap.

Vitamin B12 and Folate deficiencies can lead to megaloblastic anaemia. When there is no thymidine present, uracil is added to DNA instead. This base paring error is identified and the chain is destroyed by the enzymes involved in DNA replication. Although the nucleus cannot mature properly due to the lack of DNA, the cytoplasm is unaffected so it matures at a normal rate. Overall this causes the cell to become asynchronous in its development. This leads to characteristic megaloblastic cells, large cells with open chromatin and an abnormally coloured cytoplasm.

Investigations should reveal a low haemoglobin and a high MCV. Lactate dehydrogenase and bilirubin may both be high as there is a high rate of cell turnover. Blood films should show the characteristics listed above. B12 and folate need to be tested together if suspected.

To treat a deficiency in vitamin B12 patients are given an intramuscular injection of hydroxocobalamin. Oral folic acid is given to resupply folate levels. Dietary advice should also be given.