Next Lesson - The Endocrine Pancreas

To understand the anatomy of the thyroid and its function, and to explore common thyroid pathologies. 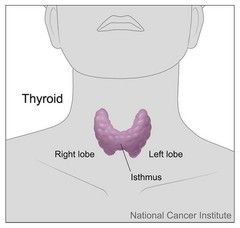 Image: Shows the position gross anatomy of the thyroid gland

The thyroid gland first appears as an epithelial proliferation on the floor of the pharynx between 3-4 weeks gestation. In order to migrate to its final position, it descends as a diverticulum (an outpouching of tissue) through the thyroglossal duct anterior to the hyoid bone. The thyroglossal duct connects the thyroid gland to the tongue, but by birth this duct should have degenerated.

Failure of this duct to degenerate can lead to conditions such as a thyroglossal duct cyst, seen as a lump on the midline of the neck. The lump moves upwards on tongue protrusion because the duct is still connected to the base of the tongue.

The Production and Regulation of Thyroid Hormones

Thyroid hormones (and their precursors) are the only molecules in the body that contain iodine (meaning the thyroid gland contains 90-95% of the body’s iodine). Dietary iodine, most commonly found in fish and dairy, must be reduced to iodide (the ion I-)  before it can be absorbed into the small intestine. It is then transported through the blood to the thyroid and taken up by thyroid epithelial cells through a sodium-iodide symporter (2Na+ are transported out of the thyroid cells in exchange for one I-). Iodine deficiency is currently a problem in the UK and is discussed later in this article.

The two main thyroid hormones  are called triiodothyronine (T3) and tetraiodothyronine (thyroxine – T4). Thyroglobulin produced by the thyroid gland acts as a scaffold for the formation of these hormones. The two hormones are made though the linkage of two molecules of iodinated tyrosine on the thyroglobulin scaffold, with the iodine being located at positions 3 and/or 4 on the aromatic ring of tyrosine depending on T3 or T4 synthesis.

The basic steps of T3 and T4 synthesis are outlined below: 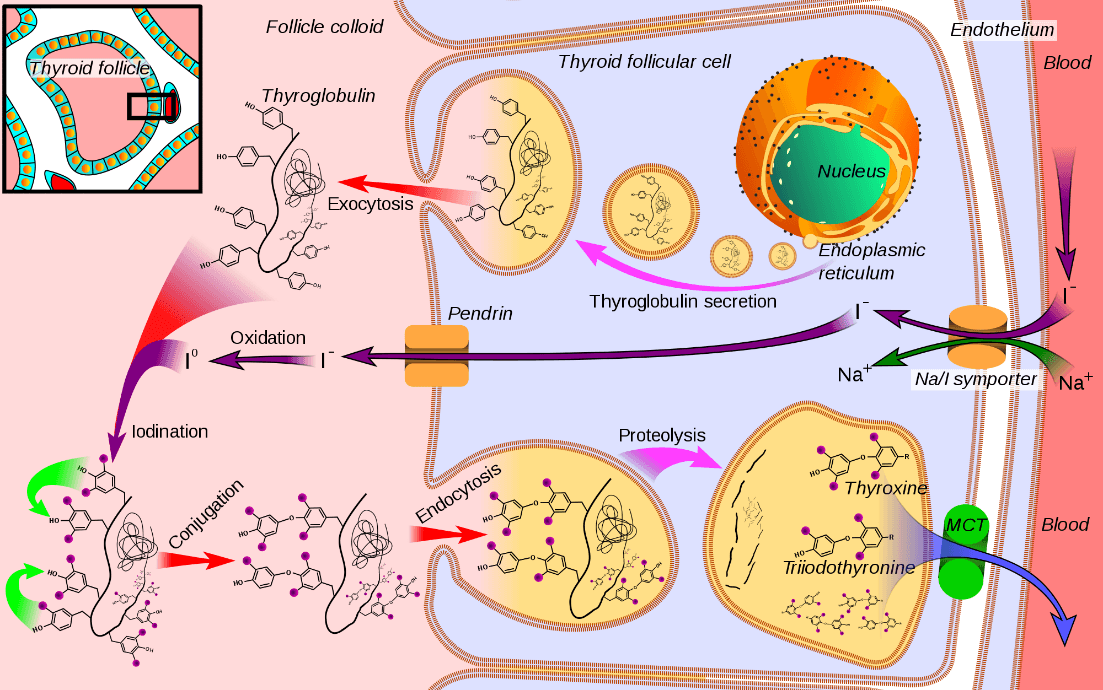 90% of thyroid hormone secreted is T4. However, T3 is four times as biologically active, meaning most T4 is converted to T3 by the liver and kidneys. Thyroid hormones are hydrophobic, so both T3 and T4 are transported in the blood bound to thyroxine-binding globulin.

Thyroid hormone secretion is regulated via negative feedback, outlined in the diagram below.

Thyroid-stimulating hormone (TSH) is a glycoprotein hormone composed of 2 non-covalently bound subunits, one α and one β. The α-subunit is the same subunit that can also be found in FSH and LH, meaning the β-subunit is what makes it unique. TSH stimulates a range of processes using GPCRs (Gα-s and Gα-q). The processes that TSH stimulates are listed below:

Examples of thyroid-hormone-regulated genes are PEPCK, Ca2+ ATPase, Na+- K+ ATPase, cytochrome oxidase, and 6-phosphogluconate dehydrogenase. These hormones are linked to the effects of thyroid hormone outlines below.

Thyroid hormones affect virtually every cell in the body, with their main responses having effects on cellular differentiation and development, and metabolic pathways. Some of the main functions are outlined below:

Pathology of the thyroid gland

A goitre is an enlargement of the thyroid gland, developing when the thyroid gland is overstimulated. A goitre may accompany hypo- or hyperthyroidism but is not always present in either condition. A physiological goitre can occur during menarche, pregnancy, and the menopause.

The most common causes of goitre are:

It is possible (but rare) for  thyroid nodules to be malignant but thyroid cancers often do not cause a metabolic disturbance. 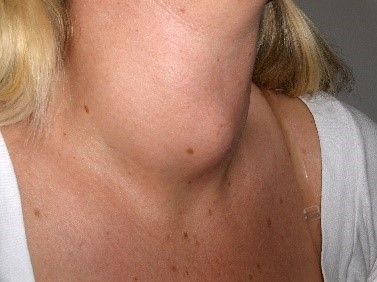 Hypothyroidism can have many causes, including:

The general symptoms of hypothyroidism are obesity, lethargy, intolerance to cold, bradycardia, dry skin, alopecia, hoarse voice, constipation, and slow reflexes. Clinically, a patient with hypothyroidism would have low T3 and T4 but elevated TSH in their blood plasma. TSH is elevated due to the lack of negative feedback from the thyroid hormones (think about the diagram pictured earlier).

In infants, severe hypothyroidism can cause cretinism, where the child has a dwarfed stature, mental deficiency, poor bone development, slow pulse, muscle weakness, and GI disturbances. This is commonly due to low iodine intake by the mother during pregnancy. In adults, severe hypothyroidism can cause myxoedema, characterised by thick puffy skin (especially in the shins, called pre-tibial myxoedema), muscle weakness, slow speech, mental deterioration, and intolerance to cold.

The normal treatment for hypothyroidism is oral thyroxine.

Hashimoto’s disease is an autoimmune disease resulting from destruction of the thyroid follicles, leading to hypothyroidism. It is the most common thyroid gland disease and is much more common in women than men. The treatment for Hashimoto’s disease is oral T4, given preferentially over T3 due to its longer half-life even though T4 is less biologically active.

Hyperthyroidism also has many causes, including:

The treatment for hyperthyroidism is antithyroid medication, which act by ‘blocking’ the formation of thyroid hormone. This can be done through Carbimazole, an anti-thyroid drug that needs to be taken continuously, or in severe cases, by taking radioactive iodine, which kills off the thyroid tissue and puts the patient into clinical hypothyroidism (this is more desirable because it can be easier to manage).

Graves' disease is an autoimmune disease caused by the production of thyroid stimulating immunoglobulin (TSI), which continually stimulates thyroid hormone secretion outside of normal hormonal control, resulting in hyperthyroidism.

Toxic adenoma is a single adenoma which has developed in the thyroid and produces thyroxine.

TSH levels can be used as a screening tool for hypo-/hyperthyroidism, as it is very rare for a pituitary adenoma to directly produce TSH.

A very high amount of metabolic thyroid disease is due to a primary abnormality of the thyroid itself and not a problem with TSH. If TSH is raised, it indicates that not enough thyroid hormone is being produced, and if TSH is reduced is indicates that too much thyroid hormone is being produced. This is due to the negative feedback loop, where TSH concentrations are modified to control the output of the thyroid gland.

Thyroid scintigraphy is the imaging process used to view the thyroid gland. Technetium-99m is used for isotope scanning of the thyroid with a gamma camera, as it is taken up by the thyroid gland. It is the most commonly used medical radioisotope and has a biological half-life of 1 day, meaning the radiation exposure is low. It can also be used for bone scans, myocardial perfusion imaging, and brain imaging.