An immunocompromised host is a patient who's immune system is unable to respond appropriately and effectively to infectious microorganisms due to a defect in one or more components of the immune system.

Due to the nature of the disease, and the vast array of different defects (>350 different mutations) that can lead to the condition, primary immune deficiency is often poorly recognised and diagnosed. It is believed that in most cases, diagnosis is made between 8 and 12 years from the first onset of symptoms and most patients when diagnosed will be aged 18+. This delay in diagnosis can leave patients with permanent tissue and organ damage by the time of diagnosis, hence the importance of awareness among clinicians to try and identify primary immunodeficiencies early to prevent damage and lead to a better prognosis and quality of life for the patient.

When should we suspect an Immunodeficiency?

The following mnemonic is often used as an initial guide when suspecting an immunodeficiency: SPUR

S- Severe: can the presenting complaint/recurring infection be life-threatening if untreated?

P- Persistent: does not respond appropriately to conventional treatment?

U- Unusual: is the site of infection and type of microbe unusual? E.g. deep tissue infection, opportunistic microbe

R- Recurrent: does the patient have more frequent infections than the average for a person without any immunocompromised features?

If the history and features of infections a patient presents with fulfil the above criteria, healthcare professionals should suspect immunodeficiency. 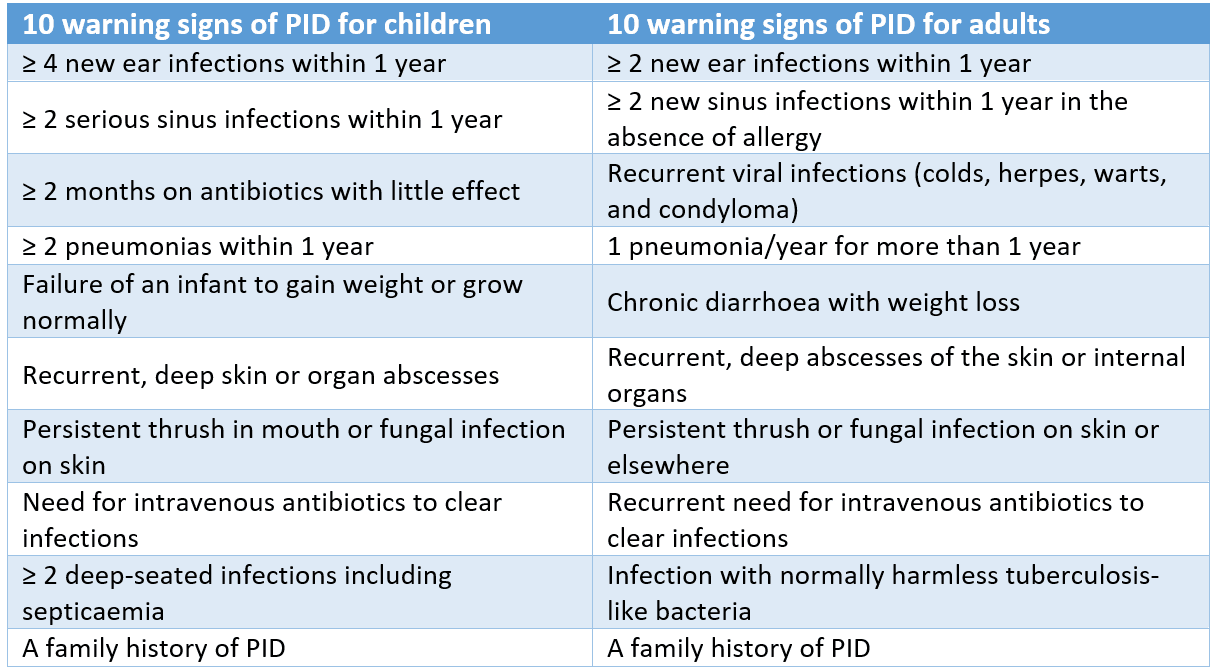 Figure: The 10 warning signs for PID in adults and children

This model has a few limitations: despite being developed by a series of experts in the field of PIDs, there is still a lack of population-based evidence to support it. It is also worth noting that some PID patients might have non-infectious manifestations such as autoimmunity, malignancy or inflammatory responses to be aware of. Different variations of PID present with different rates of given malignancies.

As mentioned above, the term primary immunodeficiency refers to congenital immunodeficiencies that are due to intrinsic gene defects. These can lead to a missing protein, cell or non-functional components of the immune system, making it weak or dysfunctional.

The main immunodeficiencies that we will focus on are:

A way of differentiating between the different types of primary immunodeficiencies is by looking at the age of onset of first symptoms:

Another way of differentiating between the major immune defects is by looking at the presentation of the infections (type of microbe and site) as specific presentations are associated with specific defects of components of the immune system: 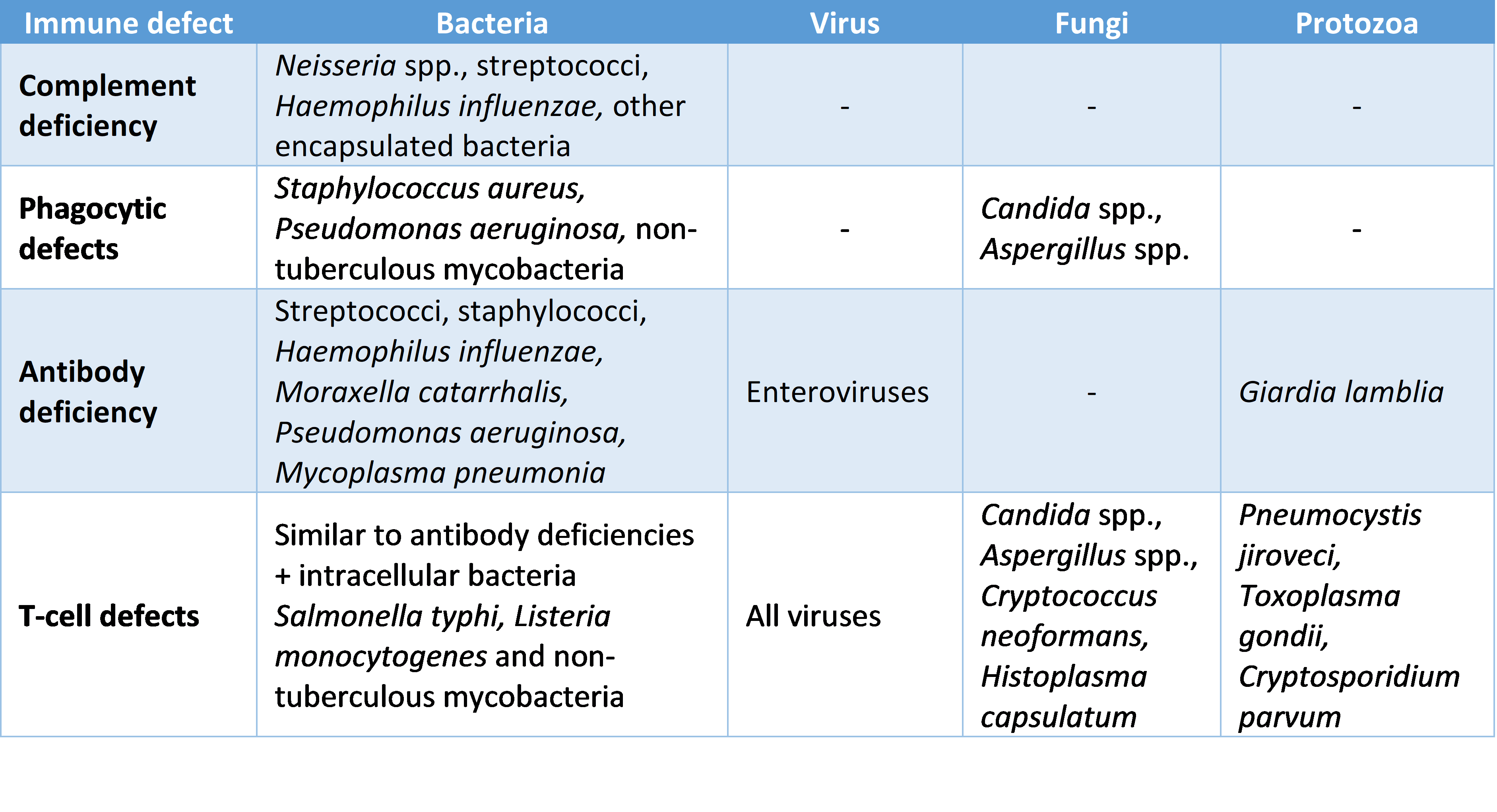 Secondary immune deficiencies are the result of a decreased production of immune components. The single most common cause of secondary immunodeficiency worldwide is malnutrition. Other reasons might be as a result of infections (see article on HIV), liver diseases, lymphoproliferative diseases or asplenism.

The spleen is an important organ of the immune system and by understanding its immune functions, one can easily understand how its removal or damage would contribute to secondary immunodeficiency. The spleen has an important role in:

Asplenic or splenectomised patients thus need to be especially careful regarding infections and hospital admissions, so they are often given life-long penicillin prophylaxis and immunisation against encapsulated bacteria (Neisseria meningitidis, Haemophilus influenza and Streptococcus pneumonia). In addition, they often wear a Medic Alert bracelet to inform healthcare professionals in emergencies.

Similarly, patients with haematological malignancies or who have undergone chemotherapy are highly susceptible to infections. This is due to chemotherapy-induced neutropenia and damage to mucosal barriers. Commonly used vascular catheters breach the skin and provide a route to let bacteria into the body as well as the attraction for biofilms which can also increase the risk of infection. Any suspected neutropenic sepsis should be treated as a medical emergency and the patient should be given empiric antibiotic therapy immediately.

Finally, any condition that results in an increased loss or catabolism of immune components can also cause secondary immunodeficiency. Some examples of such conditions include protein-losing diseases such as nephropathy or enteropathy and burns.

Shingles, or Varicella Zoster Virus (VZV) infection, is an example of a common infection in secondary immunodeficiency. Primary infection with Varicella zoster (chickenpox) is usually disseminated and remains latent by establishing itself in multiple sensory dorsal root ganglia. Reactivation of latent Herpes zoster commonly occurs in immunocompromised patients and manifests itself as shingles, which appears as a painful rash of papules (blisters) with erythema (redness) that usually follows dermatomal patterns. It is treated with pain relief and antivirals such as aciclovir.

Candida albicans is known as an opportunistic pathogen: it can be commonly found in the normal flora of the mouth and gut of healthy hosts. However, in the immunocompromised, it can become pathogenic and overgrowth of the yeast can cause candidiasis. Oral candidiasis is indeed a characteristic sign of HIV development into AIDS.

Finally, Aspergillus, a genus of conidial fungi, that comprises human and crop pathogen species, is also an organism characteristically isolated from immunocompromised hosts. Aspergillus fumigatus is the most common organism causing aspergillosis. It primarily colonises paranasal sinuses and lungs, potentially leading to necrotising pneumonia. Diagnosis of pulmonary aspergillosis can by made from the characteristic ‘halo’ signs in HRCT scans.