Key Areas of the Lower Limb

Next Lesson - Bones of the Lower Limb

There are four key areas within the lower limb:

There are four key areas within the lower limb. Moving inferiorly, they are connected with each other (this may prove to be helpful when it comes to remembering the contents of each area). From most superior to most inferior, we have:

This is a large region located on the anterior aspect of the thigh. It is important to understand the location of this site as doing so allows for identification of the femoral pulse and access to the femoral artery, which is critical for procedures such as coronary angiography.

Borders of the Femoral Triangle

There are three main borders to know:

These can be remembered by the acronym SAIL: Sartorius, Adductor (longus), Inguinal Ligament

The femoral triangle also has a roof and a floor:

Contents of the Femoral Triangle

There are four main structures found within the femoral triangle. Moving lateral to medial:

The femoral artery, vein and canal are all enclosed within a fascial layer – the femoral sheath. 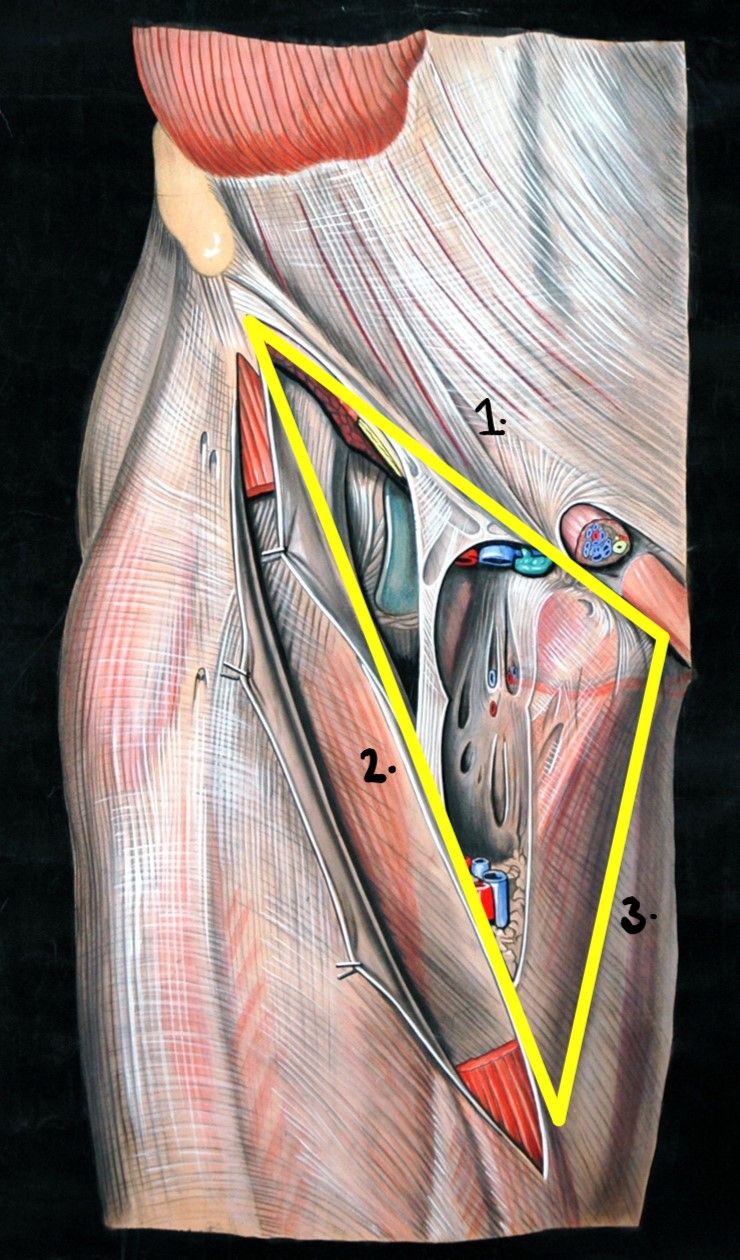 An easy way to remember the contents of the femoral triangle is with the acronym NAVEL (Nerve, Artery, Vein, Empty space, Lymphatics (the latter 2 of which both make up the femoral canal)).

Another helpful acronym is NAVY - Nerve, Artery, Vein, Y-fronts (this help you to remember that the nerve is most lateral ie furthest from the genitalia). 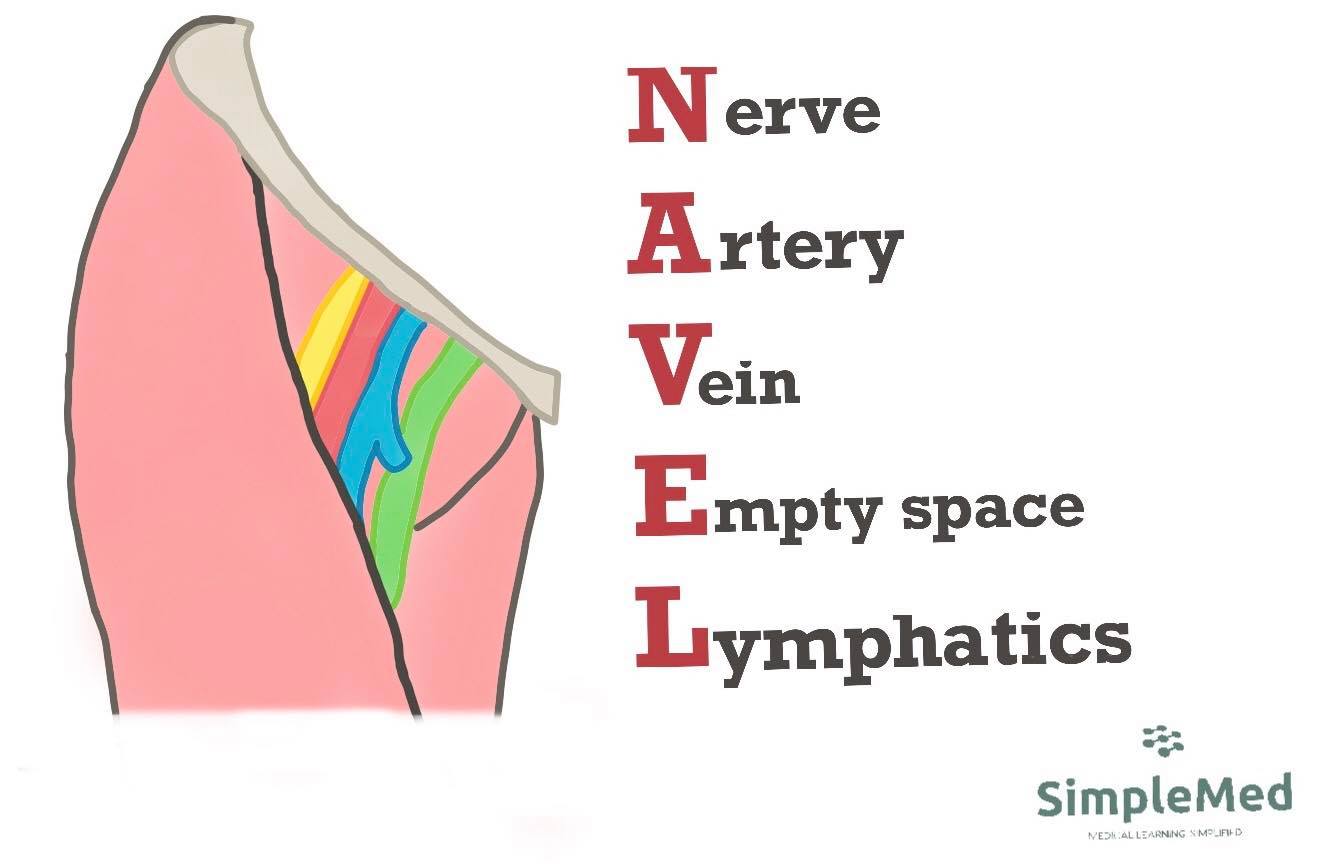 Image - Visual representation of the NAVEL mnemonic, from left to right (lateral to medial)

This is located medially within the femoral triangle and is a common site of femoral hernias, whereby the abdominal contents move down into the femoral canal. This is because the canal also contains a region of potential space into which structures can enter. Due to the rigidity of the borders forming the femoral canal, herniation of the abdomen down into this area are likely to strangulate, meaning it will get stuck and swell, cutting off its own blood supply. This is a surgical emergency.

Borders of the Femoral Canal

There are four key borders to know:

Contents of the Femoral Canal

Borders of the Adductor Canal

There are three borders:

Contents of the Adductor Canal

As this canal is a continuation of the Femoral triangle, there are similarities in terms of content:

It is important to understand the location of the adductor canal, because hypertrophy of the muscles forming the borders of this canal can lead to Adductor Canal Compression Syndrome. This can result in symptoms associated with obstructed arteries (claudication) or nerves (e.g. paraesthesia). 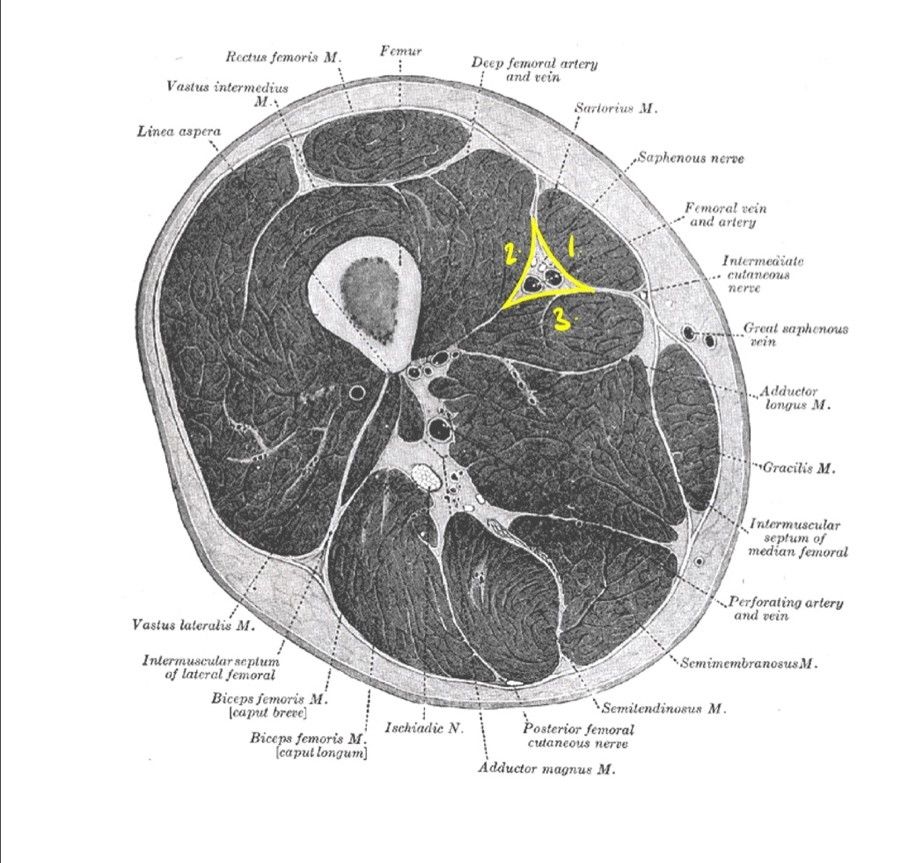 Diagram - This image shows a cross section of the left thigh. The highlighted triangle indicates the location of the adductor canal. The numbers indicate the muscles forming the borders of this canal (1. Sartorius, 2. Vastus Medialis, 3. Adductor Longus)

This is a diamond-shaped region located posterior to the knee. This site allows access to the popliteal artery, meaning it is the best site to palpate the popliteal pulse. Complications concerning the popliteal fossa include Baker’s cysts and popliteal aneurysms.

Borders of the Popliteal Fossa

The floor of the popliteal fossa is the posterior aspect of the knee joint, whilst the roof is composed of popliteal fascia and skin.

Contents of the Popliteal Fossa:

There are four key structures, moving medial to lateral: 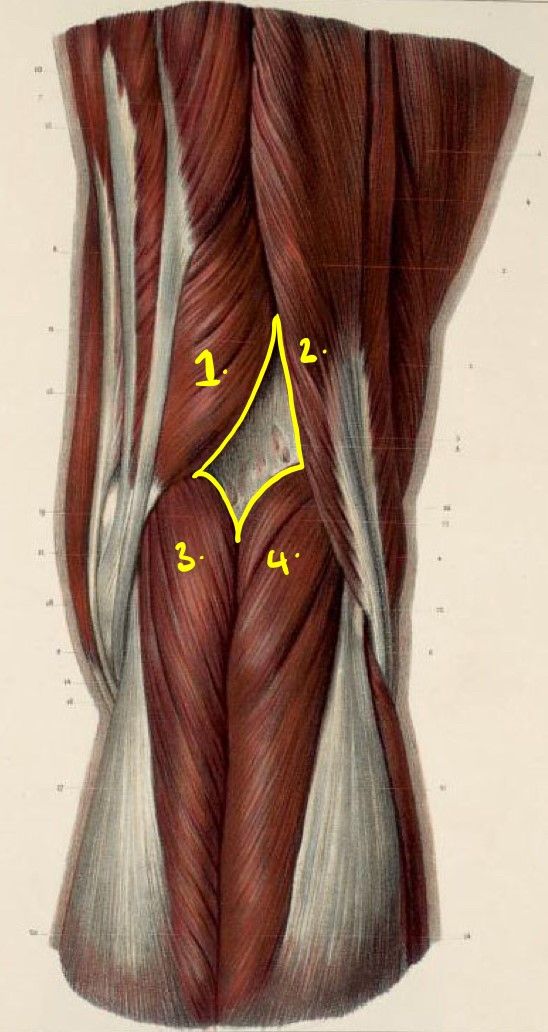