Muscles of the Thigh and their actions

Next Lesson - Key Areas of the Lower Limb

The muscles of the thigh are responsible for a variety of movements, acting on both the hip and the knee joint. There are many muscles in the thigh, however, they can be categorised into the anterior, posterior and medial compartments.

These compartments are separated by layers of fascia.

It is also very important when studying muscles that you are comfortable with anatomical terminology, as a lot is used in these articles. For more information, please check out our Anatomical Terminology Article. 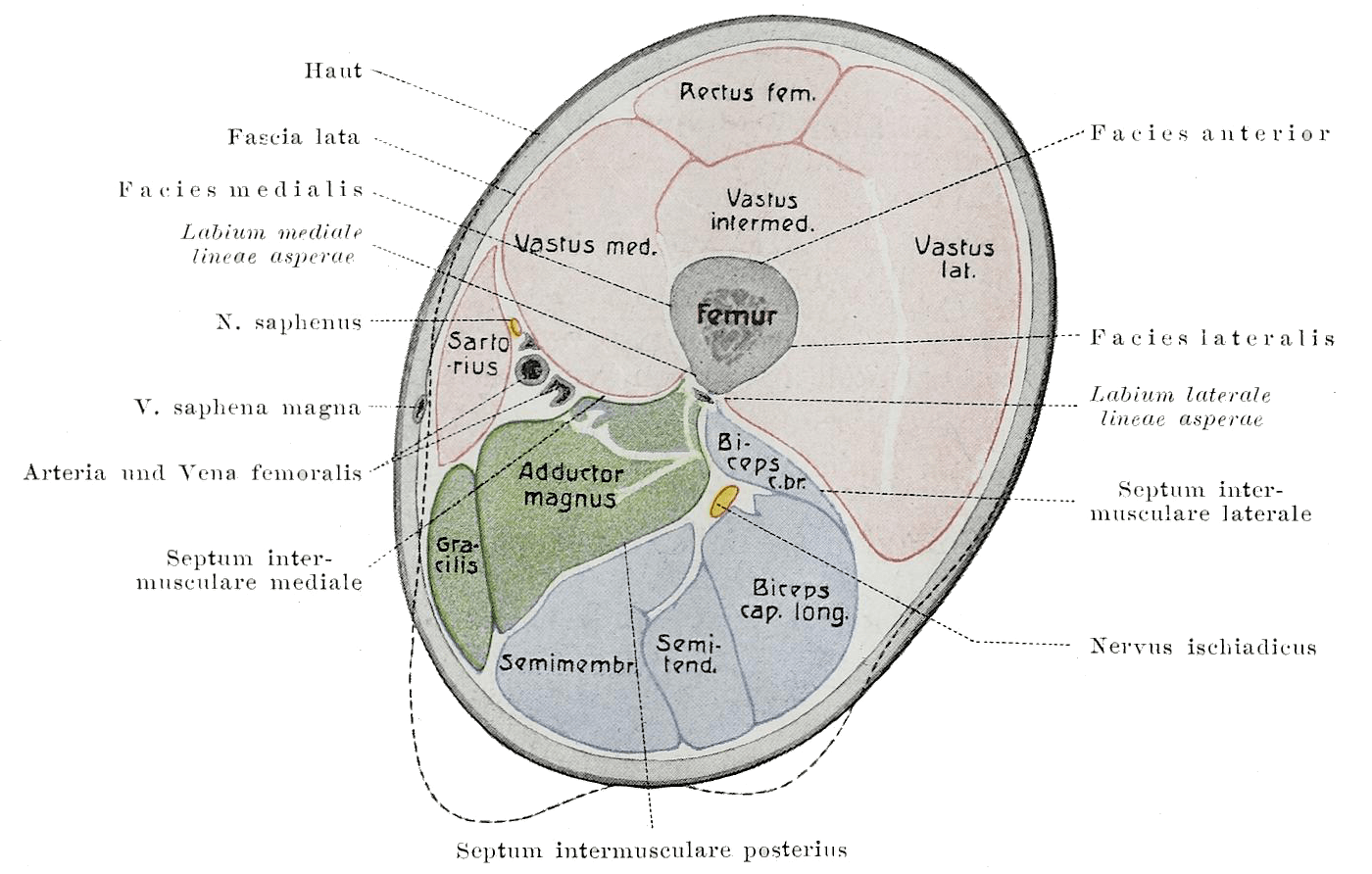 The muscles of the anterior compartment of the thigh are innervated by the femoral nerve. Generally speaking, these muscles act to flex the leg at the hip joint and can also act on the knee joint. 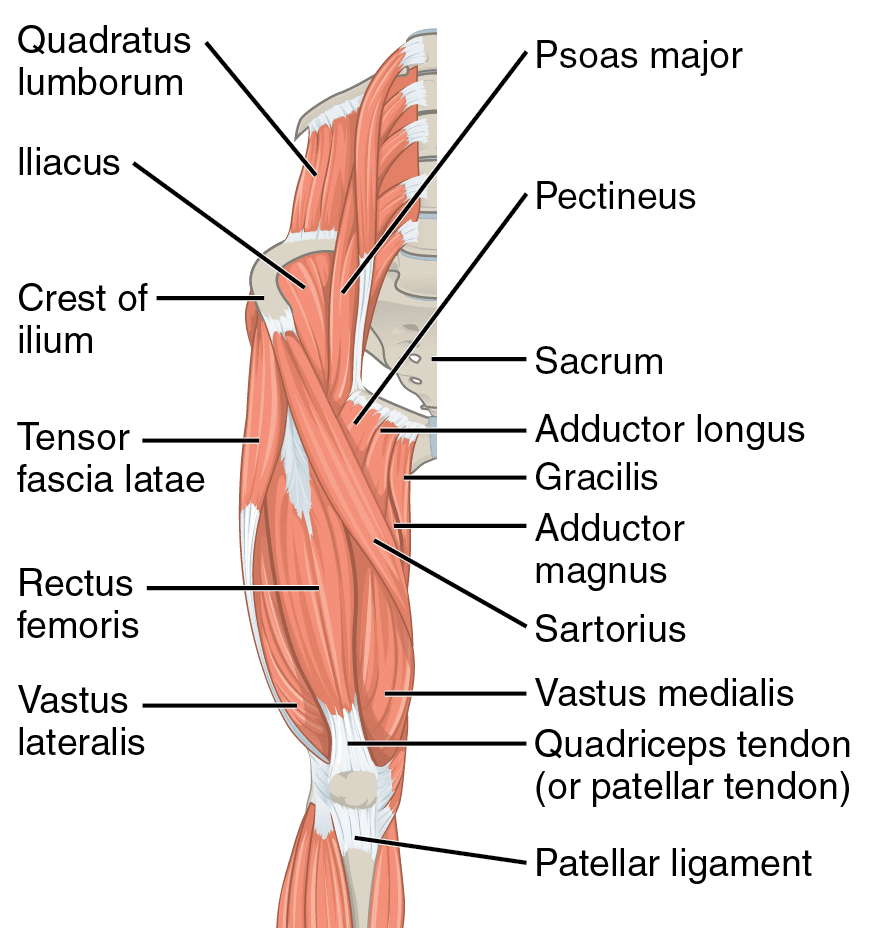 Diagram - Muscles of the anterior thigh. Note that the vastus intermedialis tucked underneath the rectus femoris and is, therefore, not visible

This muscle is the longest in the body and runs in an oblique fashion across the anterior thigh. It is long, thin and is the most superficial of the anterior compartment muscles. It runs from the anterior superior iliac spine and runs inferomedially to the medial tibia.

It flexes, abducts and laterally rotates the hip joint and flexes the knee joint.

This is a flat muscle that runs from the anterior surface of the pubis to the pectineal line of the femur. It’s placement within the body allows it to flex and adduct the hip joint.

This muscle makes up the fourth muscle of quadriceps femoris. It originates from the ilium and attaches to the medial tibia. It flexes the hip and extends the knee.

This muscle is a combination of both the psoas major and iliacus muscles, hence the name.

They contribute to flexion of the hip joint.

Thankfully, the posterior compartment is simpler. Collectively, these muscles are known as the hamstrings and are involved with extension of the hip and flexion of the knee. They are innervated by the sciatic nerve. 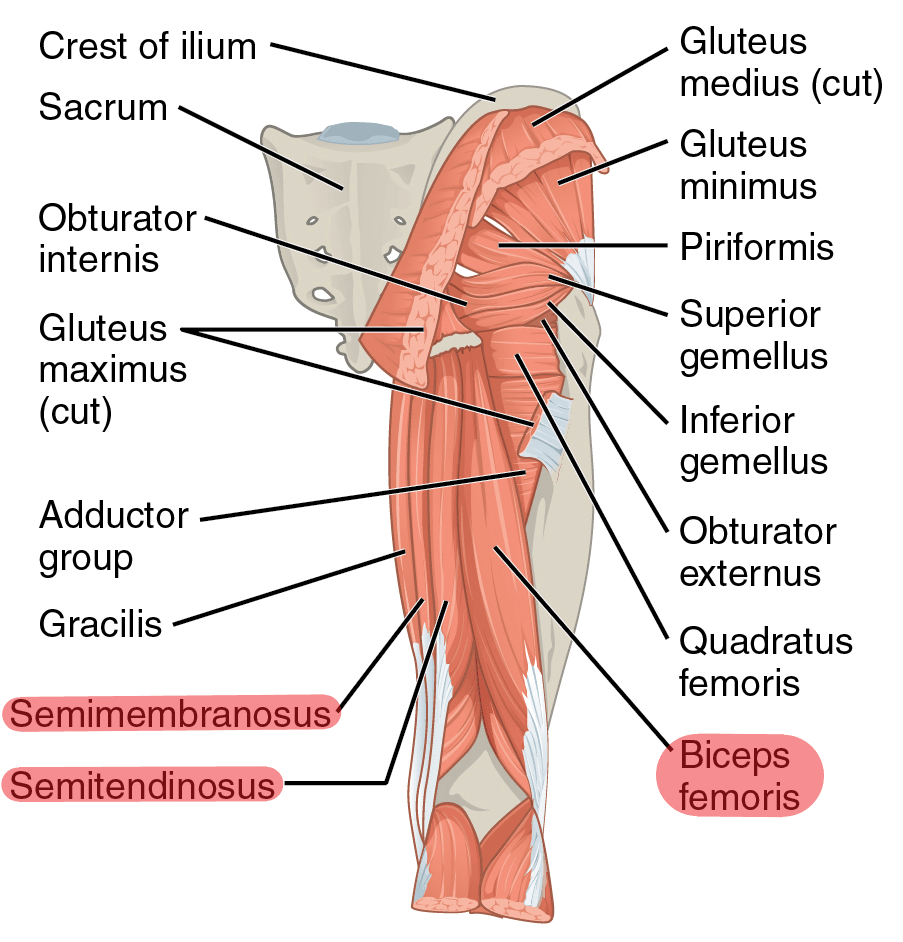 This muscle has two heads. The long head originates at the ischial tuberosity, whilst the short head originates at the linea aspera of the femur. Together, they insert into the head of the fibula. This tendon can be palpated on the lateral aspect of the posterior knee. The two heads are innervated by two different branches of the sciatic nerve: the long head by the tibial branch, and the short head by the common fibular branch. It can contribute to some lateral rotation of the hip and the knee, as well as extension of the hip and flexion of the knee.

This muscle lies medial to the biceps femoris. It originates from the ischial tuberosity and attaches to the medial tibia. It is primarily responsible for flexion of the knee joint and extension of the hip, but can also medially rotate the thigh. It is innervated by the tibial branch of the sciatic nerve. When looking at the back of the thigh, it can be difficult to differentiate between semintendinosus and semimembranosus - semitendinosus is the one with a very long tendon at the bottom that attaches to the medial tibia.

This is the most medial of the posterior muscles. It is deep to the semitendinosus muscle. Like the the other hamstrings, it originates from the ischial tuberosity. It attaches to the medial tibial condyle. In addition to extension of the hip and flexion of the knee, it can medially rotate the thigh. When looking at the back of the thigh, it can be difficult to differentiate between semintendinosus and semimembranosus - semimembranosus is the most medial of the hamstrings (both 'm' words).

These muscles are generally involved in hip adduction. They are innervated by the obturator nerve. 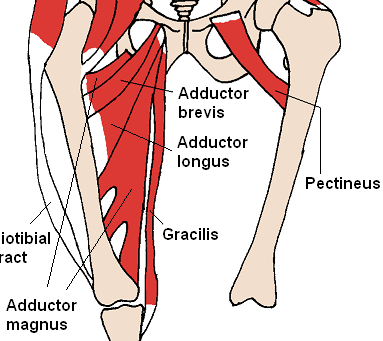 Diagram - Medial compartment of the thigh. Note that the Obturator Externus is not illustrated, but would be deep to pectineus and superior to adductor muscles

These are a group of muscles found in the medial thigh. They are primarily responsible for hip adduction and originate from the pubis. There are three muscles in this group:

Obturator Externus is the most superior of the medial compartment muscles. It attaches to greater trochanter, and originates from the membrane covering the obturator foramen (the big hole in the pelvis made by the ischium and pubis). In addition to adduction, it also contributes to lateral rotation of the thigh.

The most superficial and most medial of the muscles in the medial compartment. It originates from the pubis and descends to the medial surface of the tibia. It, therefore, also contributes to flexion of the knee in addition to hip adduction.