By Sachin Sudhakaran and Maddie Swannack

Next Lesson - The Skull

Due to the large number of structures in the neck, the differentials for neck lumps can be very varied. This article will give an overview of possible causes of neck lumps, and give some key features of neck lumps to ask about when attempting diagnosis of neck lumps in primary care.

A dermoid cyst is a congenital cystic teratoma that sits high on the midline of the neck. As this type of cyst is a teratoma, it can contain hair, teeth or skin glands alongside the fluid. They are generally painless.

A thyroglossal duct cyst is a congenital filled sac that forms in the midline of the neck. When the thyroid forms, it descends from the base of the tongue into the neck, leaving a path called the thyroglossal duct. Normally this completely obliterates, but in some people, it can remain patent, creative cavities that can fill with fluid.

The cysts are generally painless, and will move superiorly with protrusion of the tongue (because the tongue and the thyroid are connected with this patent duct). If the fluid in the cyst becomes infected, the cyst may become painful.

Pathology of the Thyroid Gland

Swellings of the thyroid can be benign (for example as a result of an autoimmune condition like Graves Disease) or malignant (papillary or follicular).

Lymph nodes are an important part of the lymphatic system and act as a physical and phagocytic filter. There are two classifications of lymph node in the neck. 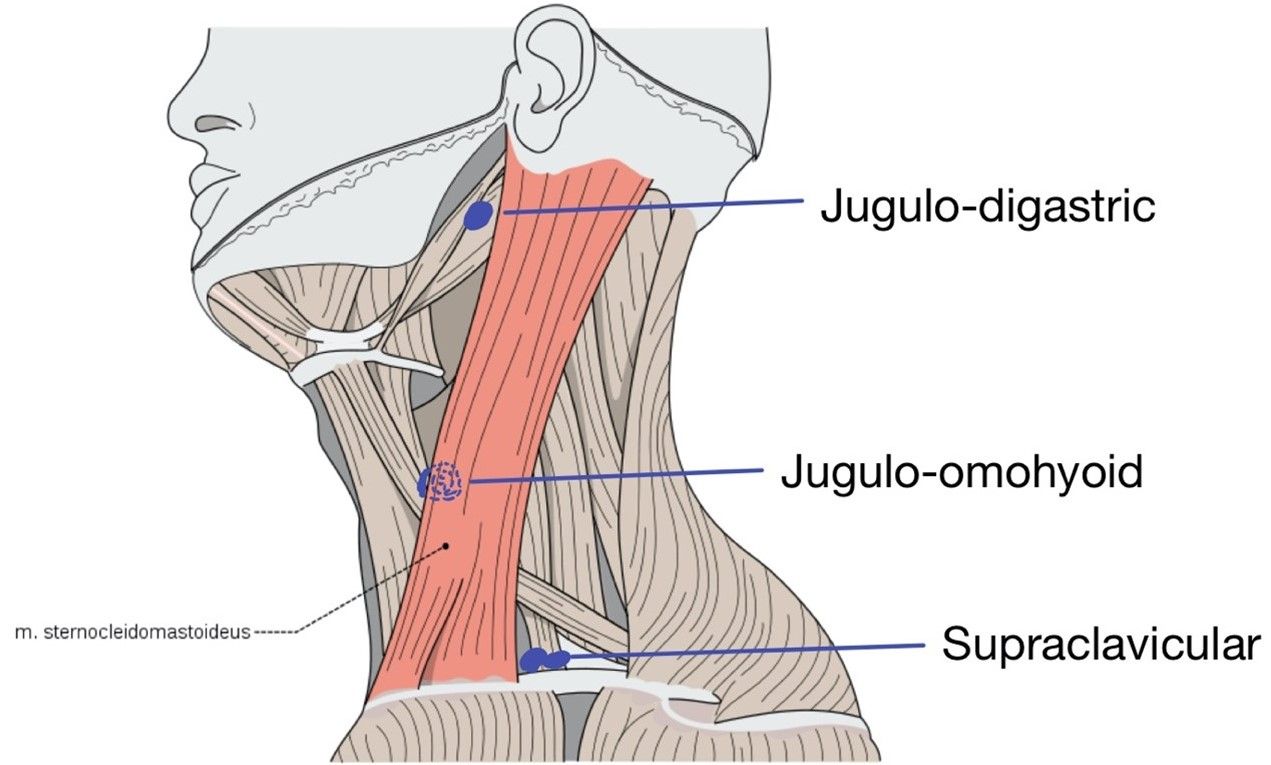 Pathology of the Lymph Nodes

Lymphadenopathy, or the swelling of lymph nodes, can occur for a number of reasons.

One notable example of malignancy spreading to the lymph nodes in the neck is the left supraclavicular node, named Virchow’s Node, which is a sign of cancer in the abdominal cavity. This includes the stomach, ovaries, testicles and kidneys. As these cancers can remain asymptomatic while metastasising, it is important to examine for the lymphatic spread in the left supraclavicular fossa.

Lymphadenopathy can also occur as a result of infection. This is known as reactive lymphadenopathy, and these lymph nodes can be tender when examined.

Pathology of the salivary glands that can cause neck lumps include calculi, infection or malignancy. The first two will be painful, especially on eating, but a malignancy may present painlessly.

A branchial cyst is a congenital cyst forming on the anterior superior portion of the sternocleidomastoid muscle of the neck.

Brachial cysts originate from the incomplete obliteration of the branchial arches, key features in the embryological formation of structures in the head and neck. Normally, the surfaces of the arches fuse, but in some cases, small gaps can be left unfused, which can form collections of fluid. Although normally painless, this fluid can become infected, making the lump painful.

Pathology of the Carotid Arteries

There are numerous causes for neck lumps, spanning from recent or concurrent infection to underlying malignancy. To add another level of complexity, neck lumps may not be associated with lymph nodes at all. When presented with a neck lump, it’s important to perform a thorough history and examination.

Factors to explore in the history:

Neck lumps are investigated with an ultrasound scan (USS). This allows for further identification of the lump. If a lump is suspicious on USS, an ultrasound-guided fine needle aspiration is usually indicated.

If further imaging is required, CT or MRI scans may be offered, especially if surgical management may be needed.