Structure of the Muscles

By Maddie Swannack and Ben Appleby

Next Lesson - Muscles in Action

There are three types of muscle in the body: skeletal (the muscles used to move the skeleton), cardiac (the muscle in the heart), and smooth (the muscle used for unconscious things like digestions and continence). Each has specialised cell adaptations.

ANP and BNP are released from cardiac muscle when it is placed under stress. They act to reduce vascular resistance and circulating volume.

Myocytes are wrapped in connective tissue endomysium. These are then collected into fascicles by perimysium, which are collected into the whole muscle, surrounded by epimysium.

Actin and myosin are the molecules in a muscle cell that allow contraction to take place. Their organisation into sarcomeres creates the striated pattern seen in cardiac and skeletal muscle. The sarcomere has different parts dependant on whether it is actin, myosin or both present.

There are three main types of muscle in the body:

This type of muscle is what is called ‘muscle’ by the public. It is the muscle that makes up triceps and quadriceps, is used to move the skeleton about, and that can be build up through things like weight training.

Skeletal muscle cells are very long, with one cell (one muscle fibre) stretching the whole length of the muscle, which can be up to 30cm. Because they can be so long, they need to have multiple nuclei, so there are multiple copies of the genes needed to code for proteins.

This image shows skeletal muscle cells. Note the long cells, the multiple nuclei per cell and the striations visible.

An important feature of cardiac muscle is that it releases chemicals depending on its state:

When cardiac muscle cells are damaged, like in ischaemia caused by a heart attack, they release troponin, a molecule used to regulate contraction (see later – actin and myosin). This means that troponin assays can be used to check for myocardial cell damage.

If cardiac muscle cells are stretched but still have intact cell membranes (called sarcolemma), like in heart failure, they release Natriuretic Peptides. These proteins decrease blood volume and vascular resistance to decrease the amount of stretch on the heart, which reduces the amount of stress the heart is under. In atrial distension,  Atrial Natriuretic Peptide is released (ANP), as seen in mitral valve stenosis. With ventricular distension, Brain Natriuretic Peptide is released (BNP), as seen in heart failure. This is a misnomer, it is named ‘brain’ because it was first isolated in brain tissue, but it is released from the ventricular wall.

This type of muscle is used for unconscious mechanisms in the body, like digestion and continence. It is found in the walls of arteries, the small intestine and the pelvic floor, and is not under conscious control.

Smooth muscle is different in structure to other types of muscle. It doesn’t have the organised sarcomeres like cardiac and skeletal (meaning it is not striated), and does not have T tubules in the sarcolemma.

The actin-myosin interactions that occur in smooth muscle are slow and sustained, with a low ATP demand. This is good because it allows the maintenance of muscle contraction over a long period of time, which is useful for things like sphincters that maintain continence.

Smooth muscle cells can respond to nerve impulses like all forms of muscle cells, but can also respond to hormones, drugs and gases dissolved in the blood.

Modified types of smooth muscle cell can have other functions as well as contraction: myoepithelial cells can form a basketwork around secretory units and contract to cause secretion, and myofibroblasts produce a collagen-containing matrix which can contract. 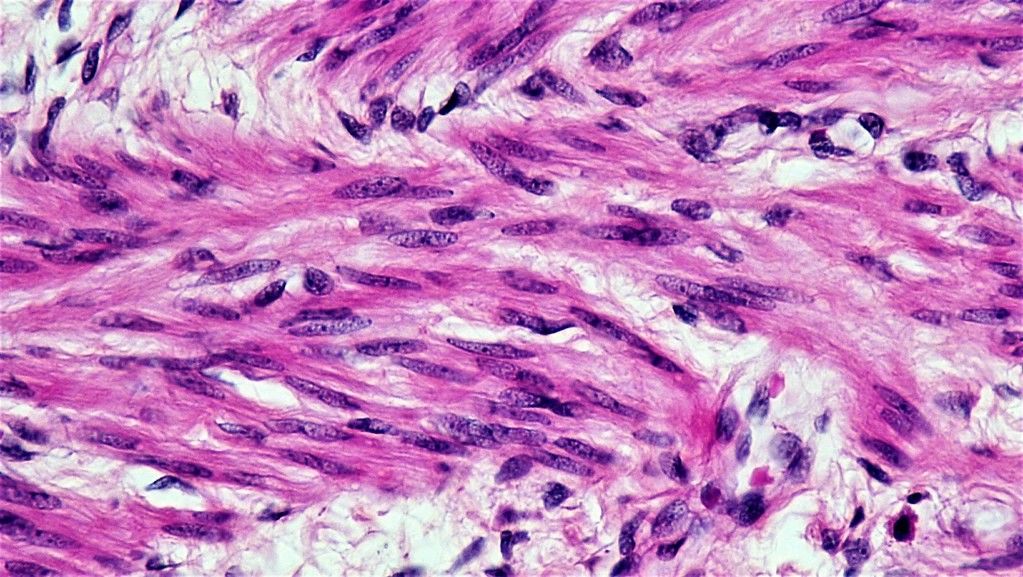 This image shows smooth muscle cells. Note their lack of striations (stripes), which shows there are no organised sarcomeres, and the spindle shapes of the cells.

Muscles are made up of many layers of fibres that are organised into bundles. The diagram below shows how each muscle fibre is wrapped in a layer of endomysium (connective tissue). These fibres are collected together into a bunch, called a fascicle. This fascicle is wrapped in perimysium. A number of fascicles are then collected together, with blood vessels, into a layer of epimysium, which forms the muscle as a whole. 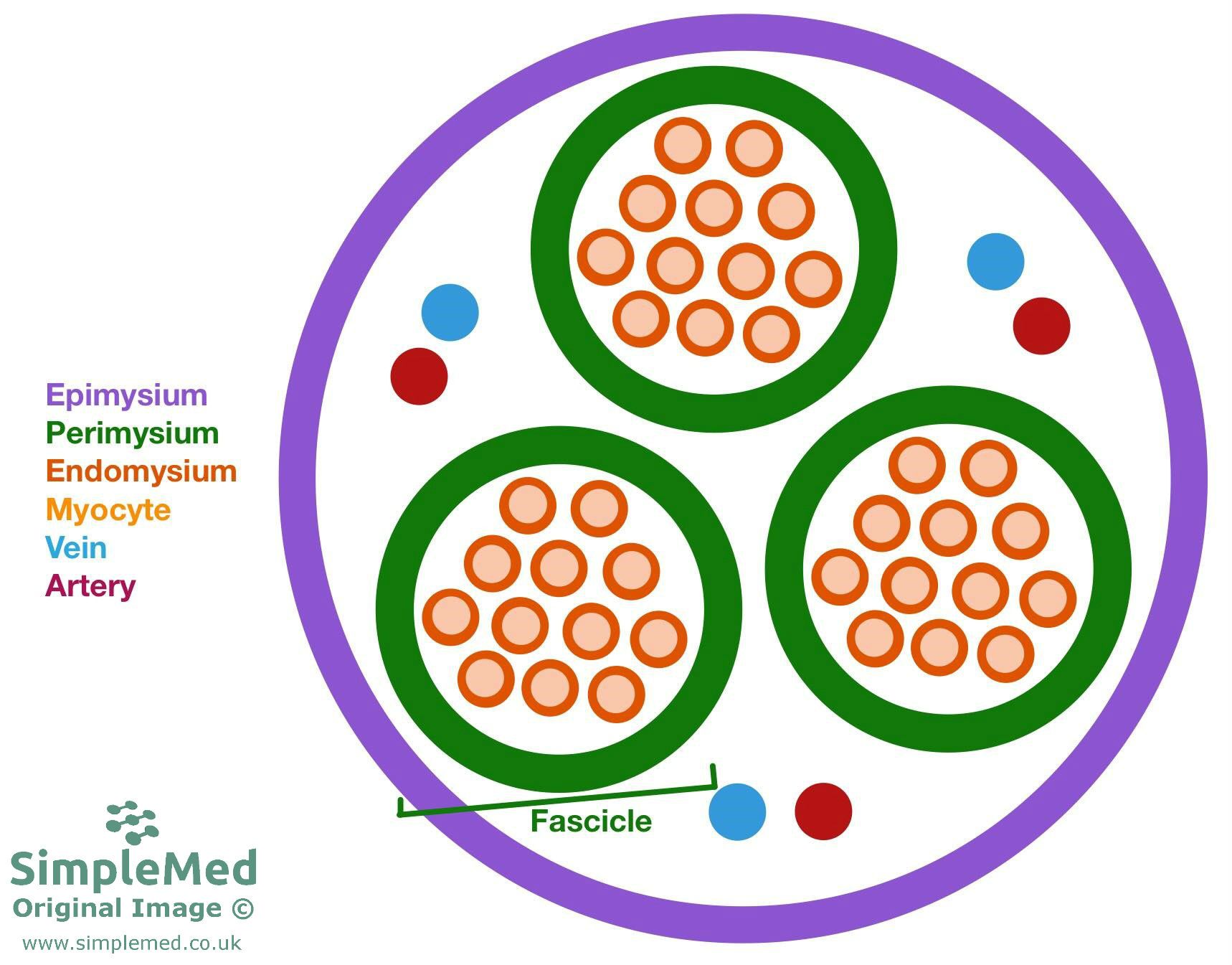 This diagram shows the transverse section of a muscle, showing the layers of connective tissue in purple (epimysium), green (perimysium) and orange (endomysium).

This can be a complicated thing to understand, but when remembering the order of the connective tissue layers, remember that ‘endo-’ means inner, ‘epi-’ means outer, and ‘peri-’ is the one in the middle.

A muscle cell, or fibre, is made up of multiple different filaments. The main two of these are called myosin and actin. Myosin is also known as the thick filament, because as shown in the diagram below, it has many strands and many heads. These heads connect with the actin filaments (also shown below) which are called the thin filaments. Together they make up the sarcomere.

This image shows one molecule each of actin and myosin. Note the different parts associated with the actin filament (troponin and tropomyosin) and how they block the binding sites for the myosin heads.

The thin filament is often referred to as actin alone, despite the fact it is made up of more than one type of molecule. The thin filament is made up of actin, troponin and tropomyosin. Troponin is important because it can be used as an indicator of cardiac muscle damage (eg in a heart attack). This is possible because the type of troponin is specific to the type of muscle, so troponin assays used to look for cardiac damage are only looking for that type of troponin.

It is important to note however, that smooth muscle does NOT contain troponin, but contains a protein in its place called calmodulin. This protein performs the same function as troponin, and is still moved out of the way by calcium, like troponin is.

The sarcomere is the name for the portion of the muscle fibre from Z line to Z line. This is quite a complicated definition to start with, but it is important to know the definition. It will make more sense in a minute.

Because of the overlapping present between actin and myosin, there is a portion of the A band that does have actin present, and there is a portion that does not. This area that does not have actin on it (only myosin) is called the H zone. This area becomes especially important later when considering the sliding filament theory (see below). Because there is no actin present in the H zone, there are no myosin heads here, because they would have nothing to attach to. The centre of the H zone is called the M line. The M line  is the centre of the sarcomere. 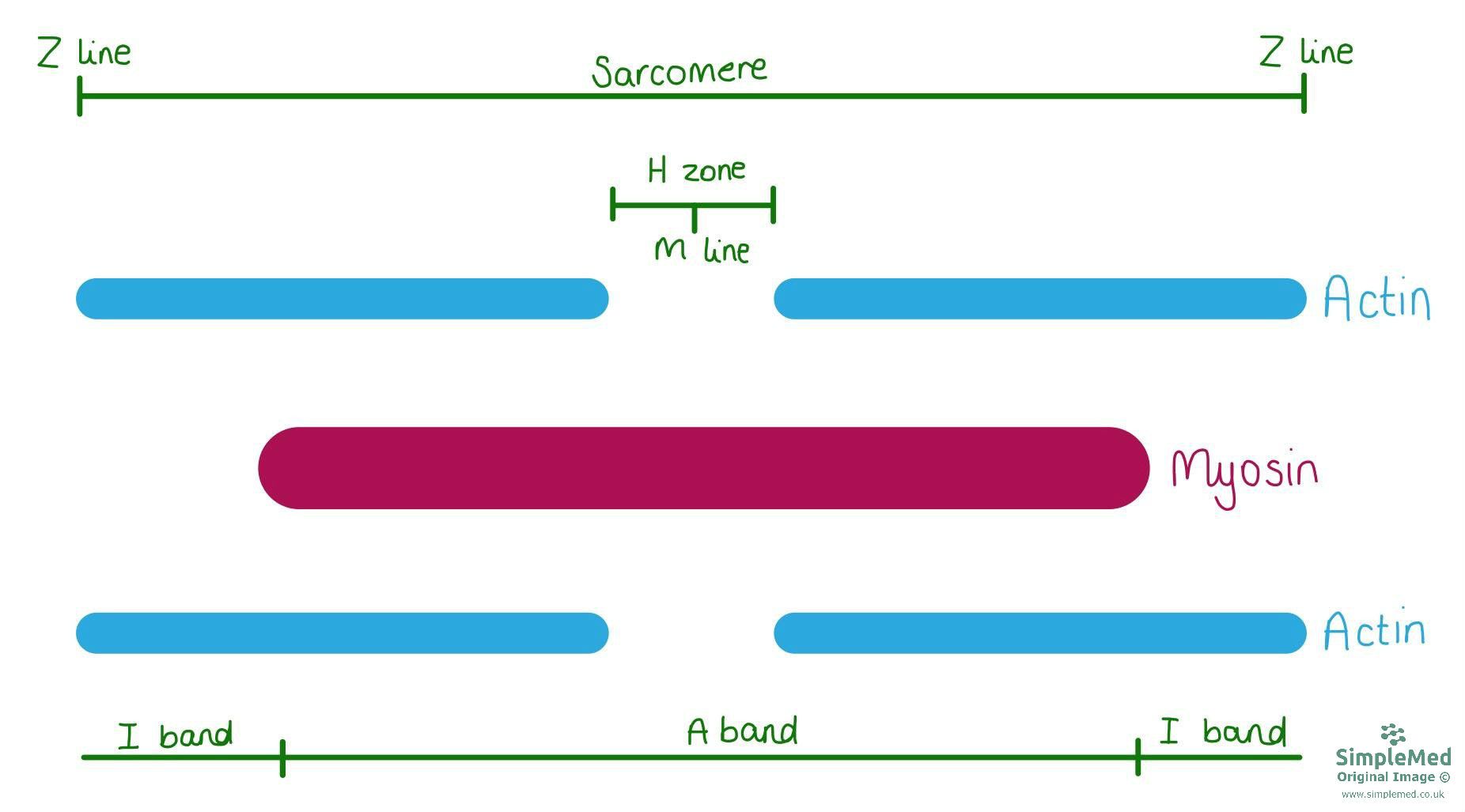 The zones and bands of the sarcomere.

The image above shows the sarcomere, the relationship between the thick and thin filaments. It shows the different regions of the sarcomere in an attempt to make the complicated names easier to understand.

It is important to remember that is the sarcomere that gives striated muscle (skeletal and cardiac) the stripy pattern. While smooth muscle cells do contain actin and myosin, they are disorganised, meaning the stripes caused by the sarcomere organisation do not occur.

So a muscle cell is made up of many sarcomeres end to end, forming the filaments. However, muscle cells need certain other things to survive just like any other eukaryotic cell.

Mitochondria are spread throughout the muscle cell, being able to provide the ATP needed for muscle contraction.

Each muscle fibre is wrapped in the connective tissue layer of endomysium, but it also has a cell membrane that performs all the normal functions of a cell membrane. This is called the sarcolemma. Because it is important that the surface area of the sarcolemma is large (so action potentials that arrive at the neuromuscular junction can be detected and quickly result in a contraction), the sarcolemma folds itself into deep valleys called T tubules. These allow for rapid muscle contraction with increased surface area, and so only the sarcolemma on cardiac and skeletal muscle needs T tubules (smooth muscle still has sarcolemma).

Cytoplasm in the muscle cell also has a special name: sarcoplasm. This is the same as the cytoplasm of any other cell, except it contains a lot of glycogen stores, and a molecule called myoglobin (an oxygen carrying molecule similar to haemoglobin, but made of only one protein and with a very high affinity for oxygen). For more information on myoglobin, see our Protein Function in Oxygen Transport article.

The SR extends through and around the muscle fibres, and its main function is to store and release calcium. This is important because at rest, the tropomyosin sits over the sites on the actin where the myosin heads are supposed to bind, so the muscle would be unable to contract through sliding filament theory (see below). It is through the release of the calcium by the SR that the tropomyosin moves, and the myosin head can actually bind to the actin.

The steps for the calcium release from the SR are as follows:

This movement slides the myosin filaments along the actin, causing the I band to shrink as the overlap increases. 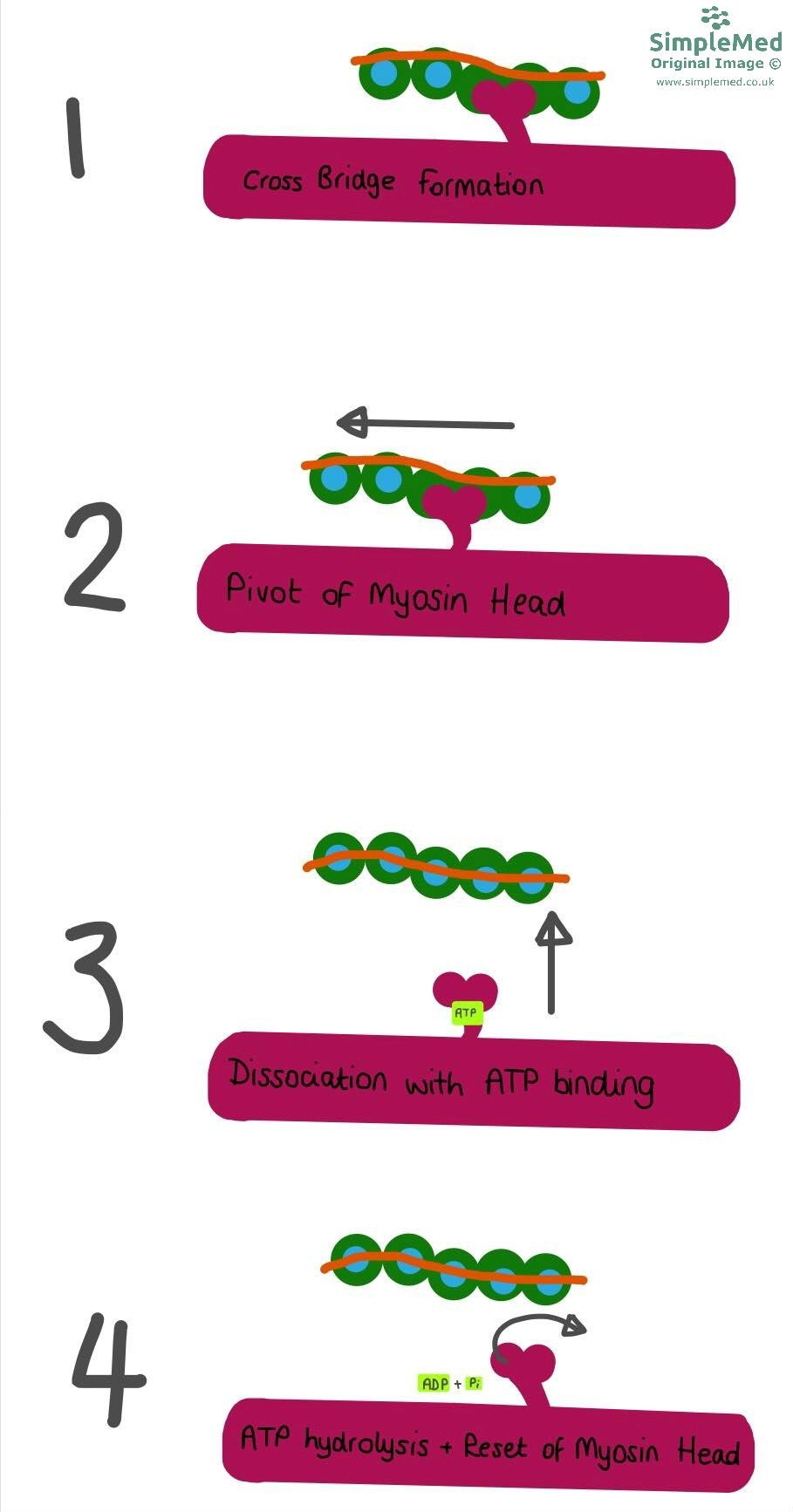 This image shows the four stages that take place in the Sliding Filament theory, explained above the image. 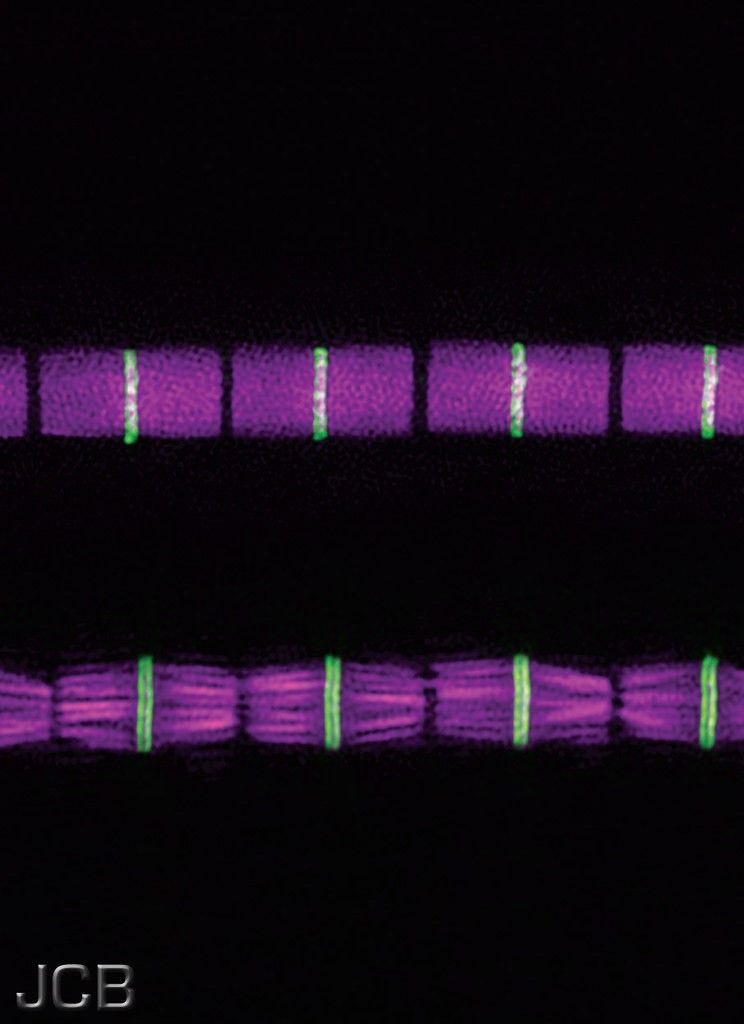 The three types of muscle regenerate in different capacities.