Next article - Behaviour of Neoplasms

Cancers are formed by the accumulation of DNA mutations in cells that allows them to proliferate out of control. The risk of cancer growth is accounted for by a combination of intrinsic host factors (e.g. age, gender) and extrinsic factors relating to environment and behaviour.

4 in 10 UK cancer cases can be prevented by lifestyle changes*. The main modifiable risk factor for cancer is smoking, and others include obesity, alcohol, an unhealthy diet and lack of physical activity. It’s important that patients are made aware of this so they can make necessary changes to their lifestyle to reduce their cancer risk. Some behavioural factors are also classed as carcinogens such as smoking.

A carcinogen is an environmental agent which can cause cancer through mutation of DNA, some of which are avoidable and others cannot be avoided. Carcinogens can be identified from:

Carcinogenic agents can include chemicals, radiation or infection. 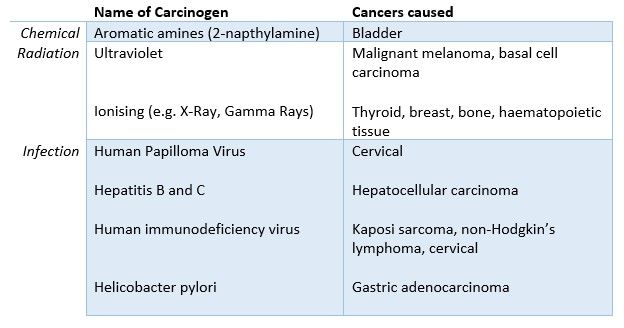 Table - Carcinogens and the types of cancer they commonly cause

Carcinogens can also be further split into either initiators or promoters. An initiator carcinogen starts the process by mutating the cell DNA, and for a neoplasm to develop a person must be exposed to these first. Exposure to a promoter carcinogen then causes prolonged proliferation. This allows for expansion of mutated monoclonal cells to form a neoplasm. Through the process of progression (talked about later), this collection of cells becomes a malignant mass.

This is a substance which was commonly used in the building and construction industries. Asbestos fibres can be released into the air and breathed in, in resulting in inflammation and scarring of the lungs. Exposure to asbestos is associated with several different types of cancer including mesothelioma – cancer of the pleura. People who are at risk of this are those whose jobs involve regular exposure to asbestos, such as demolition workers, asbestos removal workers and firefighters.

2-napthylamine was a chemical used in the dye manufacturing industry. However, it was later found to be a carcinogen which causes bladder cancer, so is now no longer used.

The identification of occupational carcinogens allowed several points to be understood about the contribution of carcinogens to the development of cancer:

The risk of developing cancer is also influenced by several important host factors. These include:

A germline mutation is a detectable variation within the DNA of germ cells (sperm and ova), which can therefore be passed on to offspring. These include mutations to tumour suppressor genes, proto-oncogenes or genes which control DNA repair. If a person has a germline mutation, they are much more likely to develop a neoplasm during their life. This is why some cancers run in families – because their genes make them more susceptible, and these genes are passed down through the generations.

The two-hit hypothesis demonstrates how a person with a germline mutation of a tumour suppressor gene on one chromosome is more likely to develop a neoplasm. If one tumour suppressor gene is inherited as mutated – the “first hit” - then the second gene can still protect the cell to supress tumour growth. However, if the second gene becomes mutated and the cell is no longer protected – the “second hit” – then the chance of tumour growth is very high.

A person with no germline mutation is much less likely to develop a neoplasm as they require both “hits” which is unlikely. 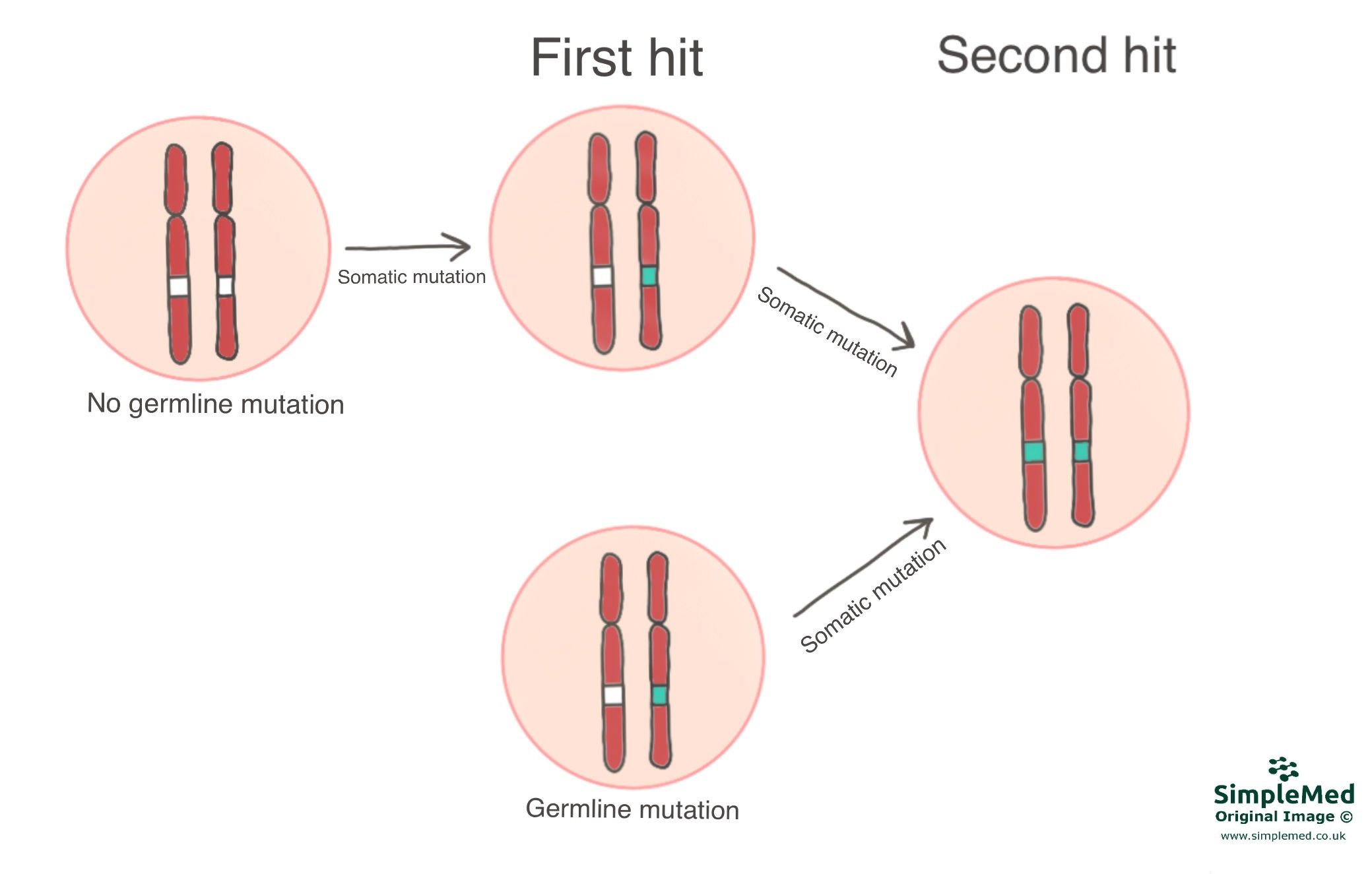 When a proto-oncogene is mutated it becomes an oncogene. A mutation of this gene enhances growth of tumours. Only one of these alleles needs to be mutated to allow growth of tumours because you can add functions with only one mutation.

DNA repair can be affected in several different ways by germline mutations, and therefore can result in inherited clinical syndromes.

There are six hallmarks of cancer which are shown by fully evolved malignant neoplasms. These characteristics are due to mutations of the DNA of the cancer cells.

Genetic instability is an enabling characteristic of the development of neoplasms rather than a hallmark.